Getting Dirty in the Garden on Earth Day

Starting the garden on Earth Day seemed like the perfect way to celebrate the planet, and the weather couldn't have cooperated better.

Sunday morning I woke early in order to find the necessary tools at the local hardware store. I biked up to Pro Hardware at Queen and Dowling, and found exactly what I needed- a square mouthed shovel for only $9.99- not too bad, I think. I also grabbed some gloves, some hand tools, and surprisingly, some seeds (marked 2007, I made sure to check), from the Dollarama. All for a buck each. Now that's value. 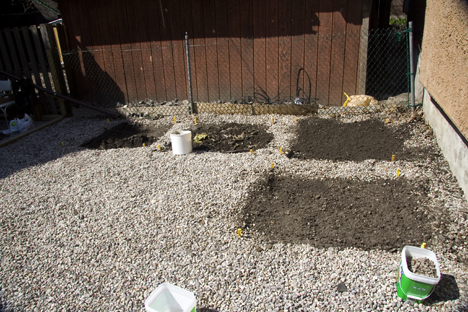 I headed home, with the shovel handle high over my head, sticking up out of my backpack. I left the shovel in the back yard for about an hour (I was waiting for my helpers to show up), and when I returned the shovel was gone! Who would steal a shovel? After flying off the handle for a bit, we found out that my landlord had put it into the utility closet, thinking it was his. Phew!

However, we didn't have a key to the utility closet, so two friends went to buy another shovel (and some gardening gloves that actually fit- the ones I picked were cute, but meant for kids, lesson learned). While they were gone, I got down to business. I measured out four 4' x 4' squares and marked the corners with tent pegs. We decided to start with four plots instead of five... the garden was taking up more room than I had intended, so we shrunk it slightly.

Once we had the proper tools, we got to work moving the stones. This was just annoying. My landlord, upon purchasing my building, tore up all the grass in the back yard and laid down landscaping stone instead. I understand why- he didn't want to maintain a yard- but it's still a bit sad. Some green space would've been nice. We're working on that, though!

Two of the plots had landscaping fabric under the stones, making the dirt beneath much easier to work. We spent a lot of time picking loose stones out of the other two. We found bits of glass, too, along with a rusty three-inch nail, some pink cloth of some sort, a couple buttons, and a crap load of plastic bags. It looked like someone had buried their garbage there. Who buries their garbage? It was frustrating to pull all of this out of the dirt, but I really can't think of a better way to honour Mother Earth than to actually scour out a bit of her outer layer. 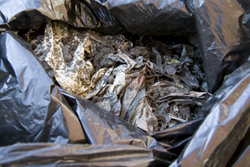 Despite the decomposed garbage (or maybe because of), the soil is fairly rich... it's nice and moist, and there were tonnes of earthworms in there. That's a good sign, right? There's a simple test I've read about that will determine how good the soil it. Ball up some soil in your hand, and squeeze it hard. If you see water drip out, the drainage is poor and the seeds will drown (in this case, try planting in containers or raised beds). Open your hand- if the dirt ball falls apart, the soil is too sandy (add some organic matter). Poke at the ball- if it doesn't fall apart at your prod, then the soil has too much clay in it (adding organic matter here will help, too). If the soil breaks and crumbles when you poke at it (like chocolate cake, they say), then the soil is good for planting. I tried this test, and the dirt in my back yard seems to be fine.

We are planning to pick up some compost on Saturday morning from the Community Environment Day in Lower Sherbourne Community Park, and we're going to mix it in that afternoon. Just to be on the safe side. Sunday, we're putting in the plants (tomato and pepper) and seeds (marigolds, cucumber, onions, garlic, lettuce, etc). I'm hitting some garden shops this week, and I'll have a complete list of what we're planting soon.