A mysterious Toronto man has been amusing hundreds of thousands of strangers online this week with a post that is both hilarious and painfully familiar to anyone in a long-term relationship.

Its origin, however, stems from a funny interaction between a husband and a wife — a type of interaction that many people on Twitter seem to have experienced themselves.

It's also a type of interaction that some women are calling out as problematic. 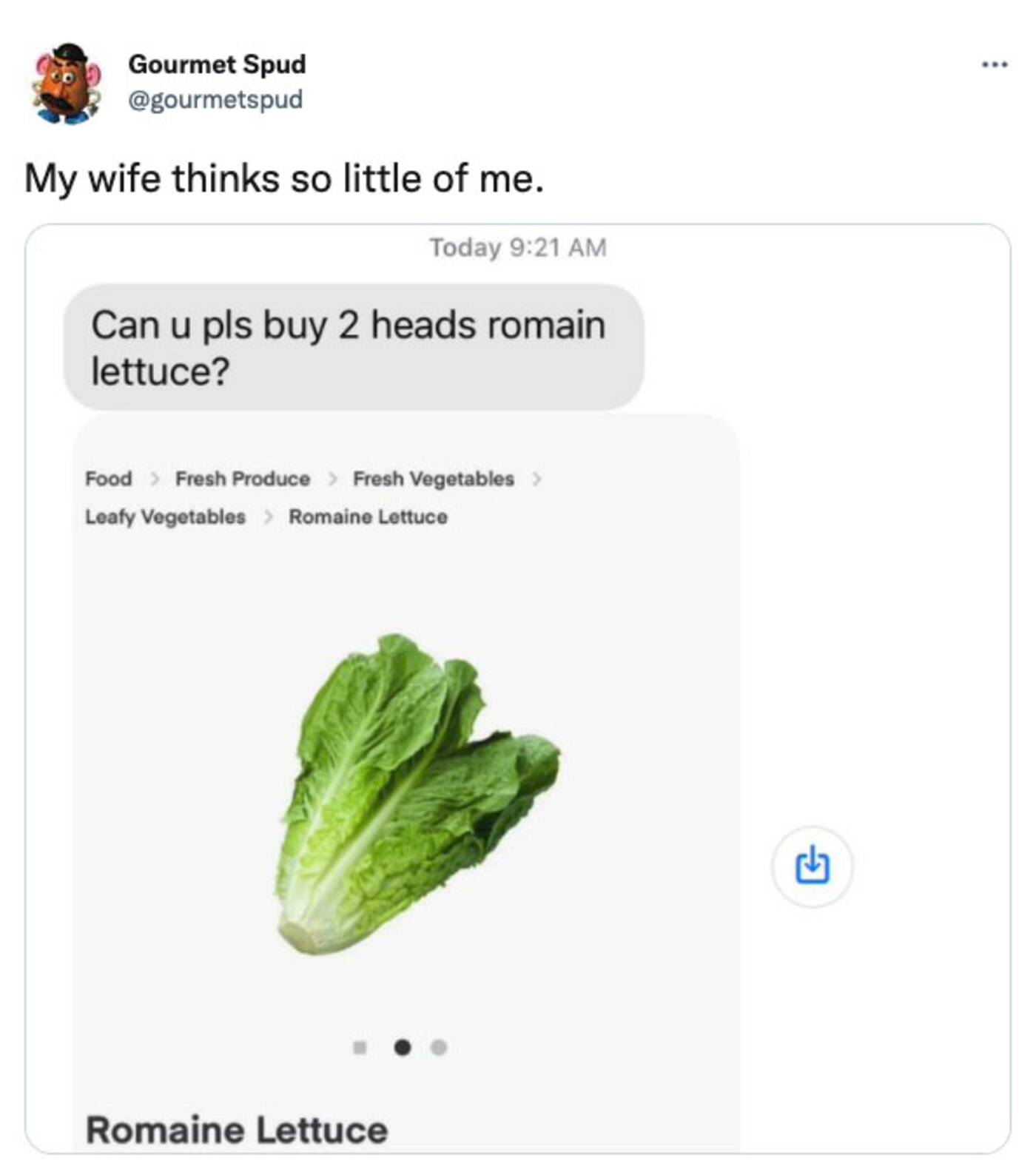 A silly tweet sent out by a user called @gourmetspud has gone super-viral, racking up more than 200,000 likes in just a few days. Image via Twitter.

"My wife thinks so little of me," tweeted Gourmet Spud, who does not wish to reveal his full identity but confirmed to blogTO that he is a Toronto resident, on July 3.

Attached to the tweet was the screenshot of a text message from his wife, who asked him to pick up some romaine lettuce while grocery shopping.

The request isn't an unusual one — romaine lettuce is dope — but the wife's inclusion of a photo showing exactly what romaine lettuce looks like (presumably so that her husband doesn't get confused and bring home iceburg lettuce or something) struck the tweeter as comical.

He wasn't the only one who thought the text message was post-worthy.

Dude one time I asked Andy for cilantro and that mf got me kale 😑 https://t.co/AI7peOLgEY

Gourmet Spud's original tweet has garnered nearly 10,000 retweets, 237,000 likes, and more than 700 replies — many of them from people who were keen to share their own stories.

Husband HATES Costco. Sent him during Covid with a map & texted pictures of items pic.twitter.com/fSFgfNzCOL

As it turns out, this grocery photo thing is not an isolated phenomenon; spouses all over the world have engaged in the pratice of digitally micromanaging their partners at the supermarket from afar.

I feel her pain pic.twitter.com/kyjcDlTBJg

"Not going to lie, I have made multiple mistakes that my wife does not send me to the grocery store anymore," replied one Twitter user.

My wife sent me to the store once to buy spaghetti squash and I brought this home. She still stayed with me, but only for the children. pic.twitter.com/yIFSvGo2RK

"Oh no, this reminds me when my boyfriend took the head of cabbage out of the fridge and said he was gonna have a salad. I said ok, but [you're] probably not gonna like it. He was very confused," shared another.

My parents were planning for guests and my mother asked my dad to get cheese slices “for cheese and crackers” and he brought home this. pic.twitter.com/DqXmu45dDH

"My husband never bought vegetables fresh until we got together," revealed another still. "He honestly did buy cabbage thinking it was lettuce the first farm stand he went to. Luckily it was delicious."

While some partners seem to prefer getting pictures sent over trying to figure out a vegetable on their own, there are a few naysayers in the thread who are holding up the tweet as an example of "weaponized incompetence."

"Funny how many of you think it's funny and [acceptable] for a grown man to be treated like a toddler," wrote one. "I mean if that's what you dudes want, whatever blows your hair back I guess."

"It's what some women need to do to make sure their spouses/boyfriends don't bring home the wrong item on purpose," pointed out another Twitter user astutely.

"It's called weaponized incompetence. Men pretend to fail at household chores so that women are forced to do the brunt (or all) of the chores."