While some of Toronto's aging restaurants sadly close, others are lucky enough to get a new lease on life thanks to local restauranteurs keen to revitalize these friendly neighbourhood spots - like Harry's in Parkdale, which will soon be under the Grant van Gameren banner along with notable hotspots Bar Isabel, El Rey Mezcal Bar and Bar Raval.

In a post on the The Food and Wine Industry Career Navigator Facebook group, van Gameren writes that he's looking for cooks to join the Harry's team. He also revealed information about what the new Harry's will look like.

"After 48 years of good times and countless memories, Tommy and his brother George decided to flip their last burgers and pass the spatula torch into the trusting hand of Nate Young," says van Gameren on Facebook.

For the uninitiated, Harry's was the true definition of an old school joint. It was tucked next to the parking lot of the No Frills near King and Jameson, sported a jukebox that didn't worked and served regulars cheap beer and fried chicken. 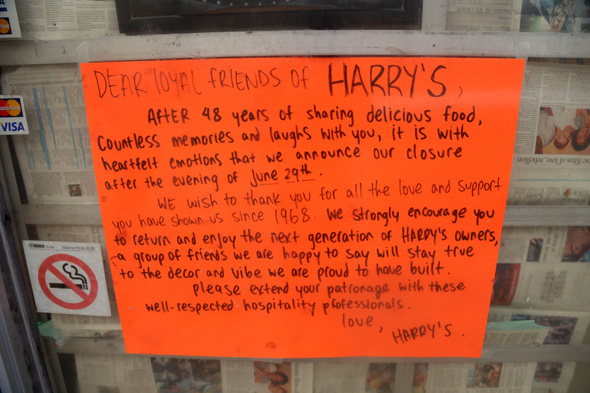 "At the helm of his intentions, Nate (along with myself, Robin Goodfellow and Mykl Webster) is dedicated to preserving the genuine casual eatery vibe, entertaining the same style of service and energy the city, and more specifically the community of Parkdale has grown to depend on for nearly 50 years," continues van Gameren on Facebook.

Along with Harry's, van Gameren and crew are slated to open the Pretty Ugly cocktail bar in the same neighbourhood. And they're not the first team to take over a Parkdale diner. Earlier this year, Jud and Maggie Ruhl revamped the Skyline Restaurant and are continuing to run it like an old-school eatery.