Looks great on Instagram but does the food taste good?

It's a Saturday morning in the Toronto suburb of Thornhill and I'm meeting a friend at the local What-A-Bagel. I'm about to reach for a multi-grain roll when a baker runs out of the kitchen with a tray of piping hot rainbow bagels. I quickly snag one, get it slathered with cream cheese and take it outside for a mini photoshoot before I dig in. Welcome to brunch in the time of Instagram.

There's nothing new about taking photos of food for Instagram, but recently, it seems like some Toronto businesses are creating outrageous dishes that are like-bait for the social media platforms, whether intentional or not.

From doughnut cones to churro cones and sushi burritos, restaurants, food trucks and ice cream shops are churning out made-for-Instagram items that send some dedicated Toronto foodies on journeys across the city in order to keep their feeds on trend.

Chef Dave Mottershall lives on the the more haute cuisine end of the spectrum. He opened his Queen Street restaurant Loka after launching a Kickstarter campaign and credits his account (at more than 45,000 followers) with enabling him to connect with chefs from around the world - this was especially important when he lived on Prince Edward Island.

Now, he and his perfectly plated food reside in Toronto. And while his dishes are always gorgeous, some critics think they're pure eye candy.

Though Mottershall understands the importance of the medium. "We see people from all over the world because of it," Mottershall tells me via email after a service at Loka.

"But it's a double edged sword. Some people assume it looks good but the cooking won't back it up. It's insulting to be called an Instagram chef. I understand colour, texture and plating because I've been cooking for 20 years not because of Instagram."

Some newcomers, however, are learning the art of plating thanks to Instagram - take the folks behind Fugo Desserts, for instance.

Kwan reveals he got the idea for this Jim Henson-approved, photogenic creation via Instagram - I is for Instagram, indeed. "A lot of the time I'll scroll through my Instagram feed and I'll see a lot of things I like, but I think can be expressed so much better," he says.

But he knows his ice cream not only has to look good, but it must be tasty as well. That's what keeps people coming back long after they've posted their requisite photo. 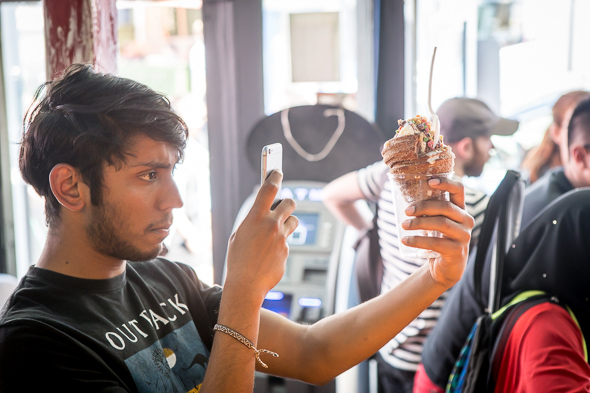 And Instagram is not only changing how we eat in the city (snap it first, eat it later), but it's also altering how we discover restaurants and dishes.

Many newfangled eateries rely on so-called Instagram bloggers for publicity and host tasting events (i.e. photoshoots) to launch new products. If a cool-looking item finds itself on a popular Instagram feed, demand for it could sky rocket.

That's what happened after I posted a photo of CutiePie Cupcake's cotton candy latte to our Instagram. Owner Melanie Abdilla tells me more people starting coming in to her Chinatown-area shop after we visited in early June. "I did not expect this at all," she says, noting how people now come from around the city to snap pictures of her pastel-coloured coffee concoction.

What-A-Bagel has also seen a spike on Instagram since it debuted its rainbow bagels. These multi-hued rings are social media gold and practically beg to be photographed - that's pretty much why they exist in the first place.

While Instagram is the medium of choice for many restaurants and food bloggers, Kwan knows it's not the way of the future. He and his team at Fugo Desserts are looking towards Snapchat.