Food truck owners in Toronto haven't always had it easy. In fact, 2015 newbie Cameron Pounder - who co-owns FeasTO - knew it was going to be a hard slog, but that didn't stop him and his partner from taking to the streets this year.

In May, city hall updated its food truck bylaws and eased some restrictions. Now, instead of staying at least 50 metres away from a bricks-and-mortar restaurant, trucks can stop 30 metres away. And, in 2014, the city made 125 food truck permits available, meaning it's now possible for these mobile eateries to sell curbside.

Allen Tan and his partner Bryan Siu-Chong run the popular Me.n.u truck. They were the second business to grab a food truck permit last year. Alhough it cost them more than $5,000, they also got one for 2015. 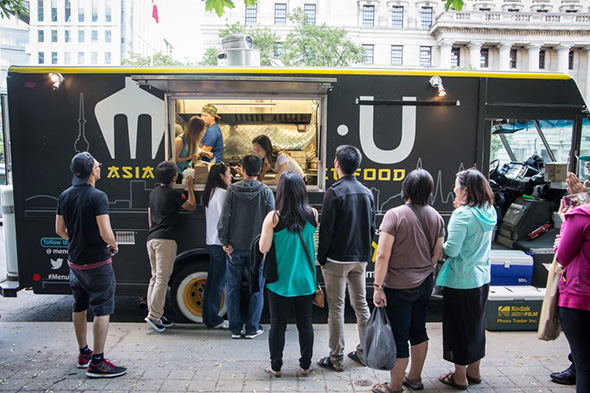 Despite their ability to sell on Toronto's streets, Tan notes that they derive half of their business from catering various functions and events. "Catering is a more reliable source of income," he says. "There's bigger margins, and you have to do less work."

Ada Mok and Cameron Pounder, whose FeasTO dumpling truck won the Food Network's Food Truck Face-off in 2014, were surprised by how little they relied on their street-side lunch services this year. "It was actually our smallest revenue stream," says Mok. "Catering, and events and all sorts of other corporate things were much more lucrative," she continues.

FeasTO didn't shell out for a food truck permit this year. Instead, Mok and Pounder participated in the Green P program, which enabled them to operate in Toronto's ubiquitous public parking lots. They also formed relationships with business owners and building management companies because food trucks are usually allowed to park on private property.

Bar Ape, Toronto's tiniest food truck (it's technically a food motorcycle), relies mainly on curbside service to sell its gourmet gelato bars. Co-owner James Carnevale says that when he and his business partner Nick Genova were starting out, they weren't sure whether they needed a food truck or an ice cream truck license. 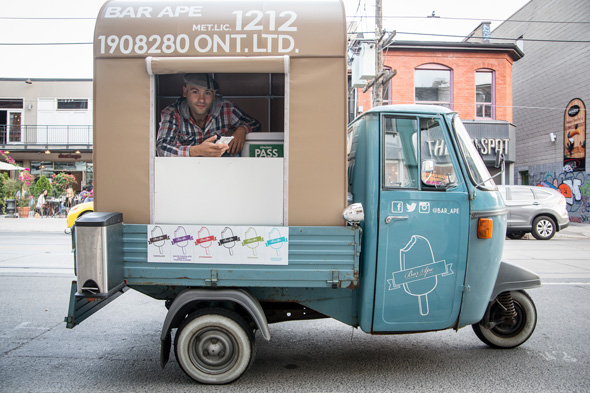 "The biggest issue when it comes to selling on the city streets is all the licensing issues," says Carnevale. "The rules are very vague."

He and Nick note that they began as an ice cream truck and co-existed peacefully with the other food trucks. But, that all started to change when they got a food truck license. "We were competing for spots," Genova says.

Spots can be difficult to come by because the city allows only two trucks per block. Genova and Carnevale would park their Piaggio Ape in certain places - like by King and John - four or five hours before the lunch rush just to be safe.

The other food trucks echo this sentiment about the two-truck rule. "Instead of having two trucks on the block, maybe increase that to four or six so we could throw our little own food truck parties on the street of Toronto," suggests Tan.

Yet, despite the difficulties inherent in navigating the labyrinth of bylaws, restrictions and parking spots, for these Torontonians, it's a labour of love.

"It was harder than we thought," says Pounder of his first year as full-time food trucker. "But it was also more fun that we thought." 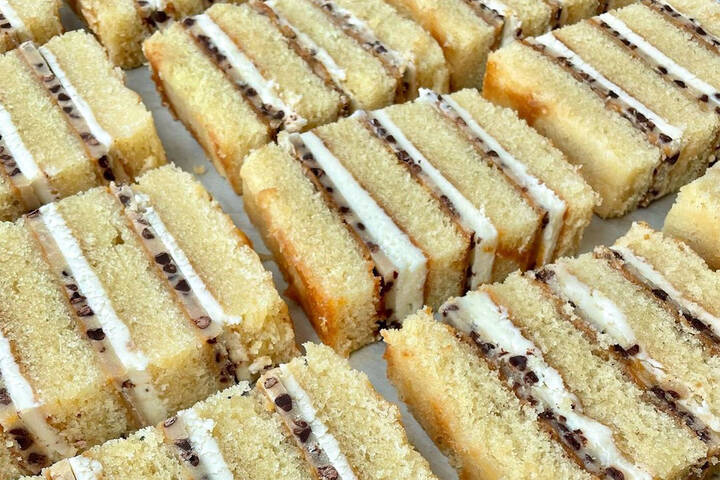