King Falafel has always made me feel at home in my neighbourhood. It is one of those places that stays the same as everything outside of it changes. The faded posters of Morocco on the walls, falafel for $3.80, customers with greyer hair each time I see them, and the Rifi family smiling and never failing to ask me "Spicy?".

In the 1970s, relatively new to Canada from Morocco, Abderazzak and Jamila Rifi noticed a lack of freshly made falafel and halal food in Toronto. In 1978, they opened the first shop in the new plaza on the south west corner of Bathurst and Eglinton. King Falafel was born and their daughter Noseiba was born soon after.

For the next 37 years, the family commuted everyday from Mississauga to Forest Hill to serve freshly made falafel and shawarma. Noseiba started frying falafel when she was 13. The parents would work during the day and Noseiba and one of her sisters would run the restaurant at night.

Customers who first starting coming in middle school now bring their children. It was not only the Rifi's second home, but the second home to a lot of customers.

"We are known in this neighbourhood," Noseiba tells me, "I come to visit my mom every week. I see customers that have been coming here for 20 years, since I was little. And other people coming here know each other. So it's like a connection within a connection."

Nine years ago the family lost Abderazzak (always known as Rifi). Their husband, father, and rock. But they kept going, keeping the business alive.

About 18 months ago they received a letter from the owner of the plaza, The Milestone Group, saying that Metrolinx is taking over in March 2016. The plaza will be demolished, used as a parking lot for the subway construction vehicles for the next five years, and then a condo will be built. There is nothing they can do.

December 31st will be the last day for King Falafel.

I encourage you to visit, grab a falafel, and say goodbye to Jamila before she heads back home to Tangiers for a well deserved and much overdue visit.

"Now I have some time. Nothing to think about," Jamila tells me as she prepares a customer's falafel, "The first time I can relax since my husband passed away. What can we do? Life is too short sometimes."

In addition to all of the remaining falafel, everything in the store is also for sale. Everything from the shawarma rotisserie down to the timeless silver Moroccan tea sets. Some of the Moroccan posters have already been purchased by longtime customers.

Noseiba is optimistic about reopening a new location in the future, "I would want to open up a new one. We have all of the recipes in our hearts, but my mom does it the best. Everything is in her head."

We all have our own King Falafels in our neighbourhoods. Thank you for all the years, meals, and feels. Long live the King. 1978-2015. 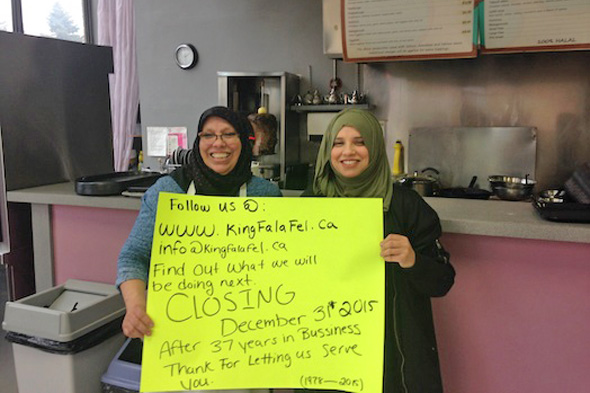