How to make a cocktail: The Fountain

Seasonal cocktail menus are, thankfully, now the norm across Toronto rather than the exception. Given that there's not a whole lot of fruit that's seasonal during the winter here, however, most of the cocktails you'll see are the polar opposite of the refreshing drinks we enjoy throughout the summer - they're frequently booze-forward Manhattan-style creations, or creamy drinks riffing on eggnog recipes. The Fountain at Parkdale's Geraldine, on the other hand, uses a method of preserving fruit juice to present a spiced pear cocktail that's both seasonally appropriate and refreshing.

Shrubs, also described as drinking vinegars, have been around since colonial times as a way of preserving the best of what the harvest has to offer. They can be used in cocktails to add depth and interesting flavour profiles. Made using any number of fruits, vegetables or herbs, shrubs are produced by macerating the products in a combination of sugar and vinegar. Which sugar and vinegar one uses is up to the taste profile you want to achieve. The result is a sweet, yet tart concoction that can be refreshing as well as complex. 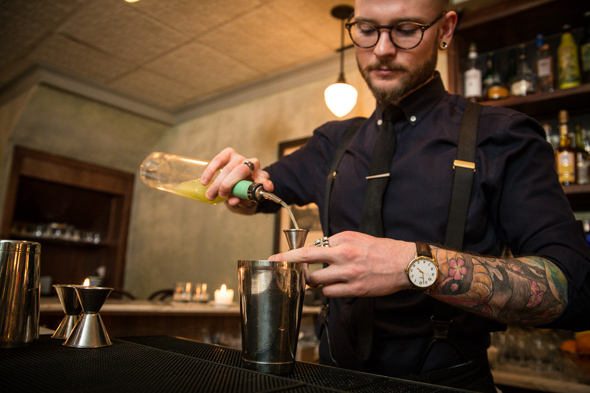 Michael Mooney, Bar Manager at the Geraldine, makes the pear shrub for 'The Fountain' with a locavore approach: he macerates the pears in verjus, the juice from unripe grapes that are taken from the vines before the harvest. The result is a tart apple-and-grape like juice that seems to suck every ounce of flavour from the fruit.

His bar program is fantastically Old World, with a menu filled with backstories and anecdotes. Ask him about absinthe and he'll start ripping bottles from his collection off the shelf. Taking a seat at Mooney's bar is as close to time travel as you're likely to experience. 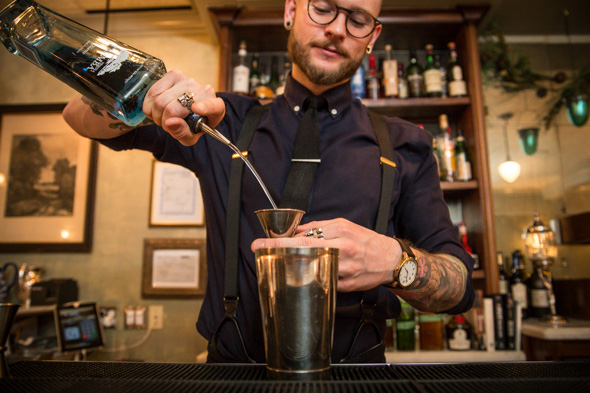 Another facet to the drink that's also made in-house is the vanilla allspice dram - a variation of the St. Elizabeth or pimento dram. It's traditionally made using Jamaican rum and the berry of the pimento tree (which encompasses the flavours of cinnamon, clove and nutmeg). Michael uses overproof Wray and Nephew Jamaican rum, allspice berries, black peppercorns, cinnamon and nutmeg, as well as Madagascan vanilla pods. 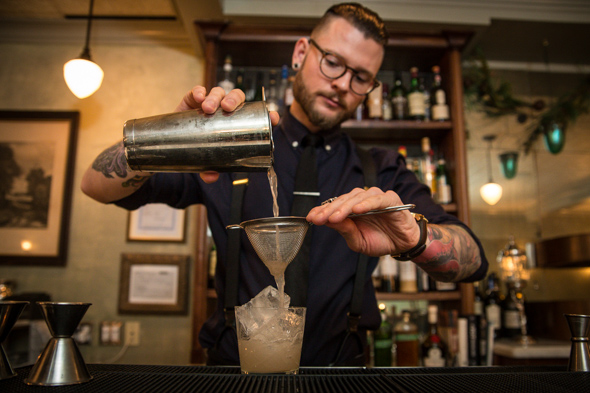 Shake and strain into an ice-filled rocks glass. Garnish with a sprig of rosemary and a couple of pear slices.

Add 4oz of 12 brix verjus to 2oz of water, Â¼ cup of sugar, and Â½ teaspoon of salt. Bring to a boil. Pour the solution (and 2 bay leaves) over Â½ pint of chopped bosc or bartlett pears. Allow the flavours to absorb and the liquid to cool. Strain out solids and bottle. Keep refrigerated.

Place all ingredients in a jar, allow to steep for 12-14 days. Shaking ingredients everyday.
Strain out the spices with a cheese cloth and add a simple syrup to the infused rum. Allow mixture to settle over night. Store at room temperature for up to 2 months. 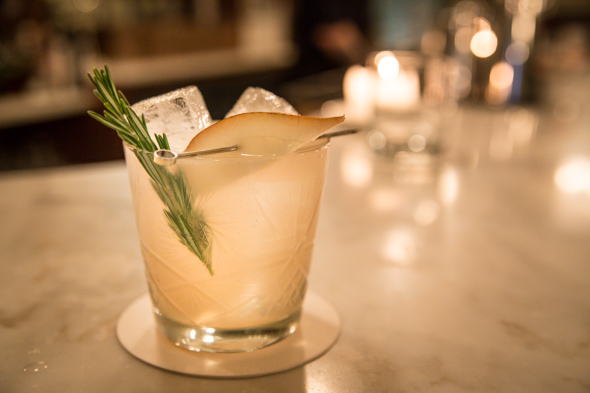