The Regent Park Farmers' Market is sandwiched between the ultramodern Daniels Spectrum and across the street from the new Regent Park Aquatic Centre. It occupies a small longitudinal strip just south of Dundas Street between Sumach and Sackville Streets that is worth seeking out.

The market is sponsored by the Daniels Corporation (which supplies the tents) and by Paintbox Bistro whose freshly made fruit smoothies, coffee, and muffins occupy the fists of many of the Market's patrons. While the market is small it has a welcoming community vibe. It runs Wednesdays between 3 and 7pm. Local musicians accent the day with tunes played on lyres, guitars and steel drums. There's much on offer, but the emphasis is on fresh and organically grown veggies.

Here are some of the vendors at the Regent Park Farmers' Market.

Fish Shak
I know almost nothing about the Fish Shak except that I love it. The cook who runs the pop-up sandwich and roti stand politely but firmly refused to answer my questions, averring a general distrust for the internet bespoken by the shop's sign: "Influenced by grandparents, not the Food Channel, not the internet, not recipe books." Whatever he's influenced by, the guy's butterfish sandwich tastes positively unreal, a Jamaican-style dish with a spice mix I can only guess at. 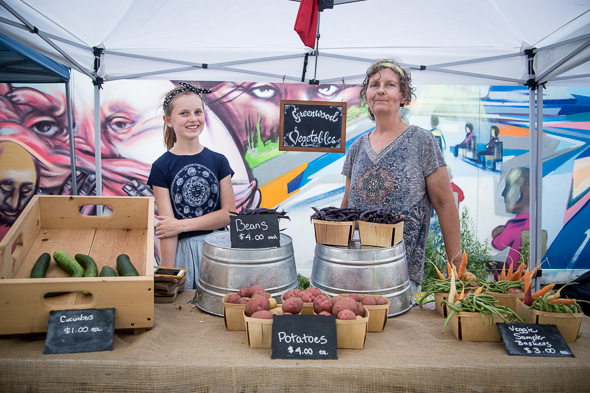 Greenwood Organic Vegetable Farm
Natalie Fedchak, who runs the Greenwood booth at the Regent Park Farmers' market, has been growing veggies for two years now, and is currently enduring the long, tedious process of getting her organic certification. She operates as sustainable a farm as you can get, powered by geothermal heat with a living roof and pond-irrigated. Her mustard greens, radishes, arugula, and baby kale - all for three dollars - are bunched and dewey; it is, however, her organic, all-natural olive oil soap I love. Get one bar in each scent: peppermint, eucalyptus, lavender, and lemongrass.

Highmark Farms
In the business for more than seven years, Zach Theo is an intensely likeable chap whose farm, Highmark, is a family-run affair operating just outside of Cookstown. Though Highmark does raise meat, including pigs, cows, wild boars, sheep, goats, and chickens, Theo assures me that his specialty is good old-fashioned vegetables, and it shows. The Highmark tent is piled high with gorgeous leaves of kale and arugula, mushrooms the size of my fist, massive bundles of asparagus tender and fresh. My recommendation: get a bunch of their salsify. This is a nutrient-rich root vegetable that tastes of oysters when cooked. 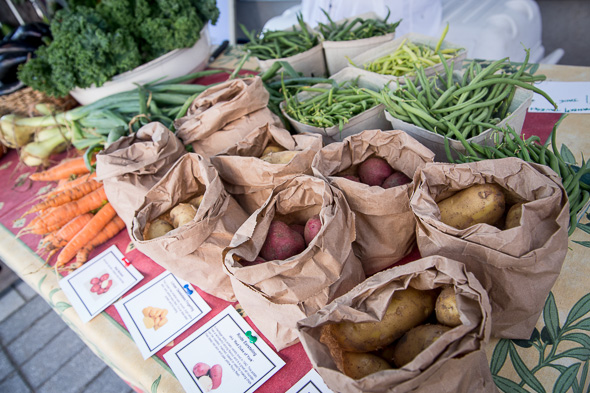 Foley Mountain Co-op
Freshly grown herbs for $3.00 a pot include celeriac, clary sage, cinnamon basil, and dill, but the real highlight from this small tribe of farmers, bakers, and enviro-activists is the Vermin Kit: a pound of Red Wriggler worms for $25 bucks, plus a complete set of easy-to-follow instructions on how to set up your own worm-based compost system, possibly the cheapest and most environmentally friendly soil production system in history. They eat just about everything but citrus, garlic, onions, and meat. 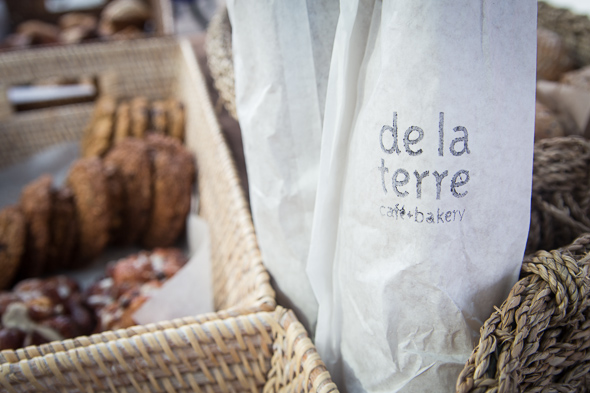 de la terre bakery
For baked goods, there's frankly no place better than this Vineland-based bakery. Chad Smit, who's running the booth, showed me the full product list - an almost dazzlingly long litany sourdoughs and pastries, croissants and cookies. The breads come in not just plain, delicous sourdough, but in olive, cheese, herb, rye, carroway, and more. Their monkey bun, a cinnamon bun-ish blob of deliciousness, is a particular treat. All of de la terre's ingredients are organic, made with cane sugar.

Fatima's Kitchen
This mother/daughter duo prepare traditional Sri Lankan and South Asian dishes including samosas, Asian beer rolls, fish patties, and beef rolls. The fillings are juicy and flavourful, but what's really special is the pastry - flakey and ethereal, perfect. The two cook in community kitchens nearby, and the value is fantastic - most treats are under two dollars. 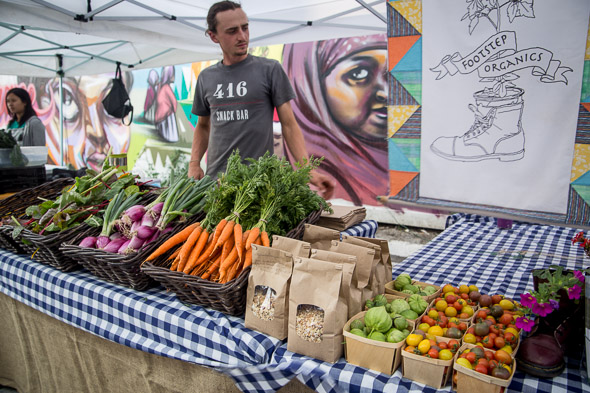 Footstep Organics
Paul Stewart and Shira Katzberg are the couple behind Footstep, a product of FarmStart, an initiative designed to help small farming start-ups by providing them with the tools and education they need to get going. Footstep's Brampton-based operation produces arugula, beets, peas, and spinach, but it is their herbs that get me - I have never encountered rosemary so fresh and fragrant, and acid-sharp wafts of chive make my mouth water.

Incredible Spice
Having worked in a couple of kitchens myself, I can tell you that Sri Lankan cooks are not only one of the most widely represented groups in Torontonian restaurants, but also one of the hardest-working and most underrated. On average, it takes about two years of grueling for most cooks to make it just to the dish pit. Sanjit Matthews had enough of this - so he took fate into his own hands, and used it to flavour his food. The result is magical - samosa chaat covered in a psychedelic mix of spices, herbs, and other traditional South Asian seasonings (he won't give me the complete ingredient list, clever man). Eating these things is about as much fun as it's possible to have with your pants on, and washed down with Sanjit's rich, frothy mango lassi, it's good enough to come back for seconds. Or thirds. Or fourths. Or fifths, as one young woman did. Sanjit also uses local ingredients - in fact, his famous smoked beet dip is made from beets from Highmark Farms, just three tents down. 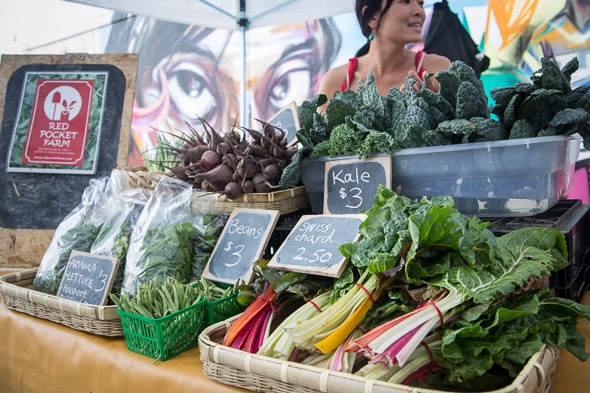 Red Pocket Farm
The lovely Amy Cheng runs Red Pocket, and though she grows western veggies the real treats of her booth is the wide variety of Asian vegetables. Seven different varieties of Japanese mustard green, Chinese pea shoots, Chinese kale, and baskets of bok choy a colour green only found in nature. Want a real treat? Try her Japanese salad turnip, a sweet and juicy radish-like vegetable perfect for slicing raw, and placing in salad made of the greens. All of Cheng's stuff is organic and sustainable. 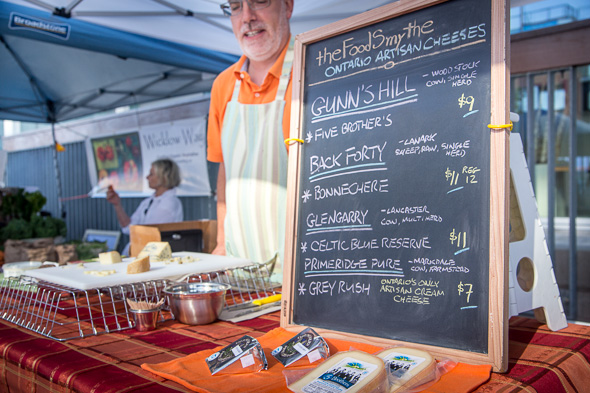 Dave the Food Smythe
Dave Smythe is doing his part in celebrating and popularizing the underrated cheeses of Ontario. The moustachioed purveyor of Ontarian milk solids dedicates himself to small, independent dairies whose cheeses don't often get touted in the big city: Gunn's Hill, Crossroad Farms, Glengarry, and more. Best bets? The Gunn's Hill is a firm cheese and is superb, and the Crossroad's sheep gouda has a wonderfully nutty flavour. 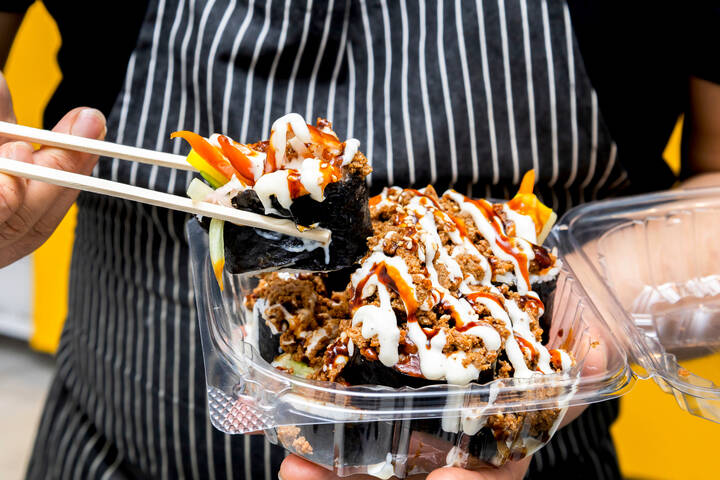