Toronto Public Health released today the results of their investigation into the outbreak of food-borne illness at the CNE and as it turns out it wasn't all Epic Burger and Waffles' fault for making dozens of CNE-goers sick last week. But it was the cronut burger's fault. Or, rather, the maple bacon jam topping on the burger supplied by local bakery Le Dolci. Alas, while Le Dolci figures out how something called the Staphylococcus aureus toxin made it into their fancy jam, Epic Burgers will re-open today ready to feed jam-less burgers and waffles to the masses.

Of course, there are plenty of other, less well publicized gastronomical delights to choose from inside the wonder that is the Food Building at the CNE. Look a little closer and you'll find healthy options from organic and halal-certified kitchens, or a stall set up by your favourite local fast food place in the city. Here's a round-up of 20 stalls in the CNE Food Building worth hitting up when the hunger pains strike. 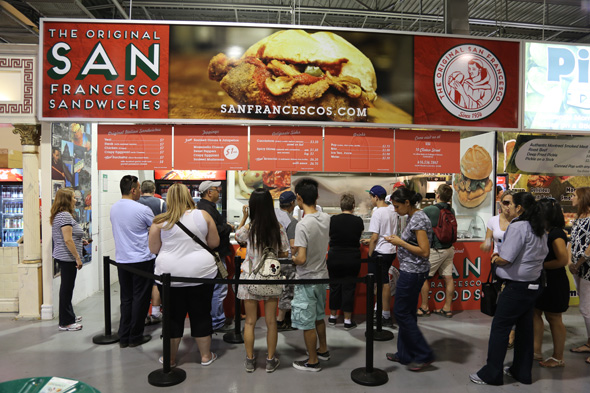 San Francesco Foods
You can find these classic Italian sandwiches in the east, west, and north end of the city on any given day, and they've brought some of the most well-loved menu items to the CNE. You've got veal, chicken, steak, or eggplant sandwiches ($7), or the new porchetta with mustard garlic aioli and parmesan ($8).

Taqueria Burrito Bar
In case you already spent your CNE dough gambling, this Yonge and Bloor taquiera has brought their 99 cent taco to the Food Building. You get a soft-shell corn tortilla stuffed with pulled pork or chicken and shredded lettuce, and you can choose the spiciness level. There's also a long list of mix and match burritos, nachos and burrito bowls, with meat, veggie or fish options and tons of toppings. Each other dish goes for $7.99. 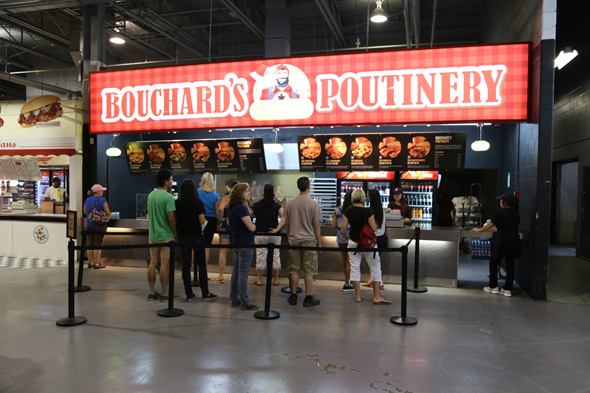 Bouchards' Poutinery
Bouchard's exhibits an unabashadânay,proudâlove for poutine, whipping up a cheesy list of Canadiana-inspired snacks. The standout, I would say, is the Lumberjack ($8.50-$10), which includes three strips of Canadian bacon and a sunnyside egg.

Bua Thai
Midtown fave Bua Thai claims to specialize in authentic Thai meals. You can get, for example, a pad Thai and a spring roll for $5.99, or a mango salad for the same price. In short, everything on the menu looks pretty accessible to even the most stringently western palate. Make of that what you will. 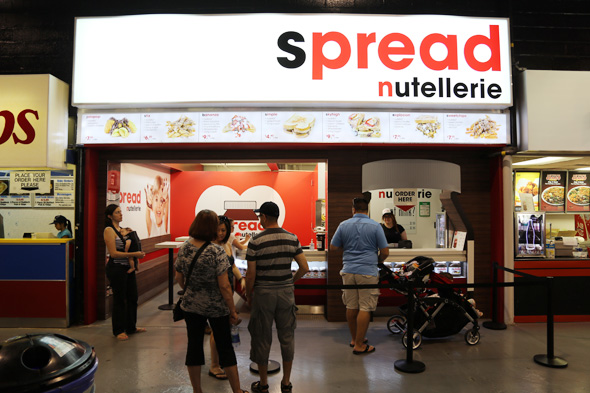 Spread Nutellerie
This stand has been causing a buzz this year since before the CNE even opened. And I want to eat the food they serve every single day for breakfast and as a midnight snack, thighs be damned! The "skyhigh," for example, features Nutella on French toast with cream cheese, icing sugar, strawberries and banana ($9.75). I defy you to not want to eat this.

The Colossal Onion
The Colossal Onion literally sells massive plates of just onions for $10. You can get your onions deep-fried, in ring form, or, it appears, fresh and dippable. There are also oniony nachos sprinkled with tiny chopped veggies, and those look the most meal-like of anything on the menu. 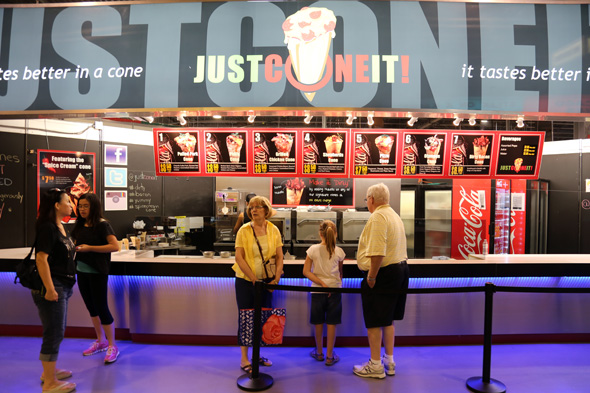 Just Cone It
Upon first glance, I thought this booth was serving up some seriously whack ice cream cones. Then I saw the "pizza cone" ($7.50) and realized it wasn't so. The cones are actually baked dough, and the standout, I would say, is the dirty bacon cone ($6.50), which is stuffed with bacon and nutella.

Far East Taco
KImchi fries with pork or bulgogi ($7.96). Beef dumplings ($4.42). Need I say more? You've also got a choice between tacos or bao, and are you ready for the toppings? Spicy pork and kimchi, fish, fried tofu, chicken...everything on this menu looks just as fantastic as the item before it, and I want to eat all of it as I write even though it's first thing in the morning. 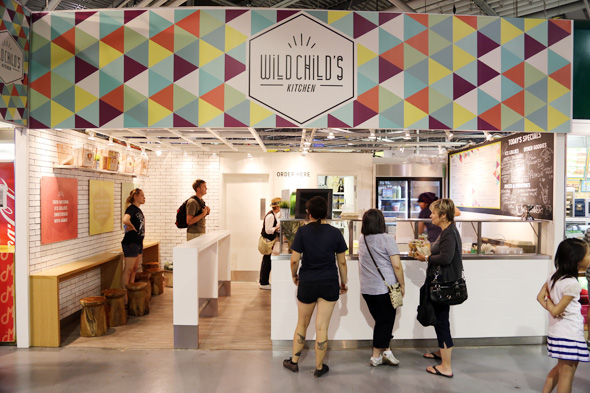 Dutch Frites
Want some bitterballen? Sounds like a formidable weapon, right? Well, it's just beef poppers, six for $5, but still. Awesome. The other chef's special when I visited were spicy Dutch poutine ($7.95) and stroopwaffel, which is a sort of cookie drizzled with caramel and cinnamon. 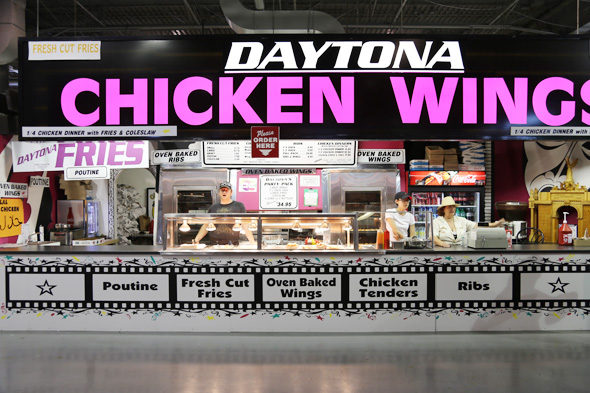 Daytona Chicken Wings
Daytona has been operating out of the CNE for nearly 25 years. He proudly sells halal-certified, trans-fat free, baked-not-fried chicken wings, and he is happy to educate anyone who asks, especially creepy reporters.

gr
gr serves up fresh Greek-style yogurt, with plenty unique toppings to choose from aside from the traditional nuts and berries. There's a PB & J flavour ($6.19) and a Mediterranean-style yogurt salad ($7.09), but I have to say the standout is what they brand as a kids meal: it has Oreo cookies, Smarties, chocolate sauce and honey ($6.19). 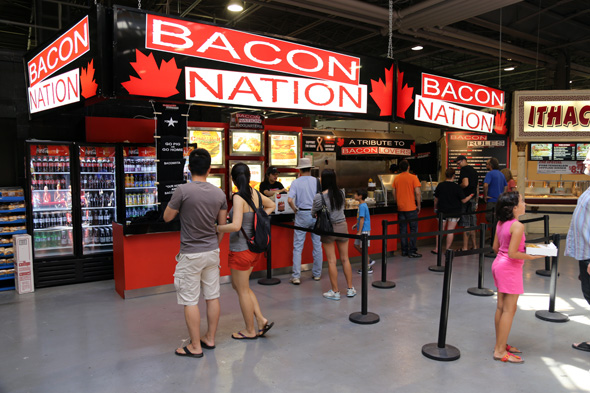 Bacon Nation
A pretty unambiguous business model. But if you're going to clog all of your arteries at once, this place just might be worth it. Try, for example, the peanut butter and bacon milkshake ($6.65), or the beer-battered, bacon-wrapped hotdog on a stick. There's also a mix of sandwiches on the menu, which feature bacon mayo or Nutella.

Thyme & Olives
Thyme & Olives is a Lebanese-style bakery that stands as a beacon of health amidst the madness. They make traditional tabbuli salad ($4.50), the enviable veggie stuffed grape leaves (6 for $5.50), and plates of hommus served with pita for $4.50. 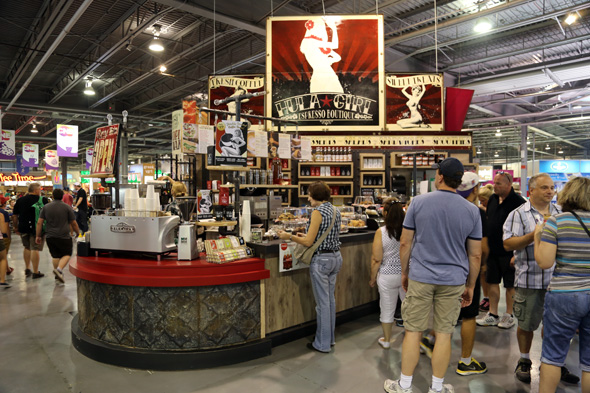 Hula Girl Espresso
Bring The Kids to the CNE Day? Need a damn coffee, asap? Hula Girl is conveniently set up smack in the middle of the building, and she sells a series of sandwiches in case you suffer from blood sugar issues as well as caffeine addiction.

Ghazale
Ghazale is a small chain of restaurants serving up Middle Eastern street foods in the city. At their CNE booth, you'll find all the classics, with their halal-certified chicken or beef shawarma ($6.49) or made-from-scratch falafel ($4.49) as faves. 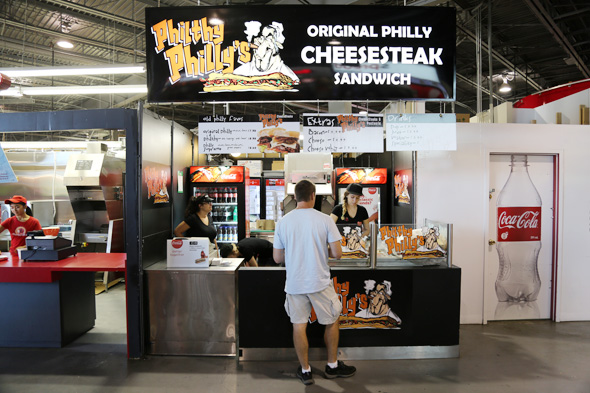 Philthy Philly's
If Homer Simpson made a sojourn to the CNE, this would be his first stop. You'll find all forms of cheesesteak sandwiches, all under $10. I would personally go for the "supreme," which includes some nutritional value in the form of mushrooms and green peppers. Extras include such delicacies as "Cheese Whiz" and bacon.

Pull'd
If you like your CNE with a side of MEAT, make a beeline for Pull'd, toward the back of the buiilding. I might suggest trying the "Jack's" sandwich ($12). Though repeated grammatical idiosyncrasies that are meant to be funny are actually undeniably annoying and should be punished by severe beatings, this thing has it all: pulled pork snuggled in between three pancakes and covered in Jack Daniels-infused syrup. 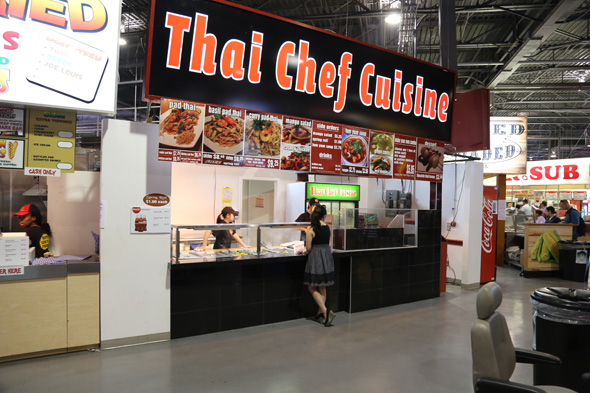 Thai Chef Cuisine
Thai Chef Cuisine, as you might be aware, also exists outside the confines of the CNE food building.You will basically different varieties of pad thai here (chicken, veggie and shrimp, all under $10), as well as their tom yum soup with veggies ($2.75) or shrimp ($3.50).

Jake's Lobster
Jake's Lobster knows the beauty of keeping things simple. They dish out lobster rolls ($13, made from fresh Atlantic lobster) and "chowdah fries" ($8) which is basically what it sounds like: clam chowder served liberally over a helping of french fries.

What do you like to eat at the CNE? Add your alternative suggestions to the comment thread below.