How to make a cocktail: The charred cedar Manhattan

Toronto's cocktail renaissance can be traced back to a number of sources, but few would argue that Barchef's Smoked Manhattan represented something of a turning point, both in terms of ambition, and skillful execution. Utilizing the theatre of a grandiose belljar, ordering one became an event that was worth the inevitable wait. Though Frankie Solarik's creations have a tendency to be hit-or-miss (Peking duck is not a welcome addition to a beverage), there was something really special about the ceremony involved when that jar was lifted, and the room was filled with memories of campfires past. 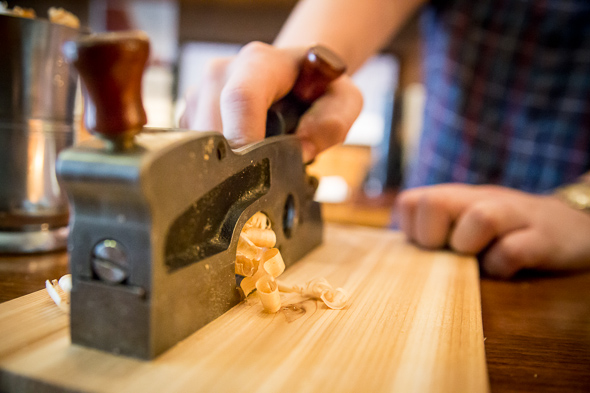 Nick Kennedy, of Salt (Ossington & Dundas), speaks fondly of the drink, but declares both the price point and the, admittedly extensive, ceremony involved as somewhat exclusive. It's not difficult to imagine why he laboured to produce something that could inspire the same feelings in its consumers, but without the high price, nor the need for such highly specialized equipment.

Nick's enthusiasm is infectious, and though he keeps a short cocktail list, tailored around the different stages of the dining experience, to pass to those in the restaurant, those propping themselves up at the bar will find themselves with no such guide. Nick himself inquires and probes, crafting beverages to suit each customer's personal tastes. The Cedar Manhattan, however, has become a favourite, and he's made sure to keep his cupboards well stocked with the necessary ingredients. 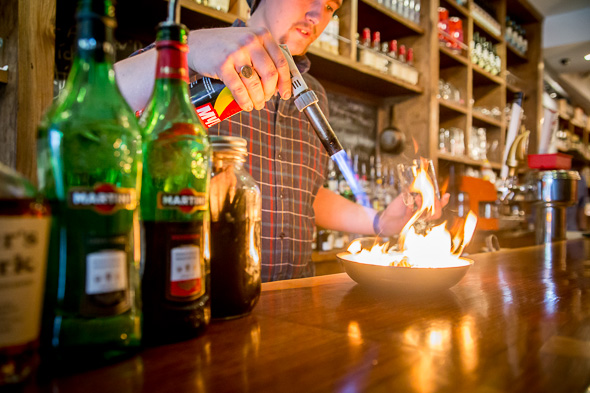 Utilizing food-safe cedar planks and a plane, Nick shaves curls of wood that he uses to smoke the glass, prior to even beginning the cocktail production itself. Though he uses a blowtorch, a cigar lighter will probably do the job in a pinch.

That same cedarwood is used in making his cedar bitters. Home-made bitters are something of a micro-industry amongst Toronto bartenders these days (given the paucity and expense of offerings Ontarians are left with by the LCBO), and Nick has thankfully shared the recipe for these too. 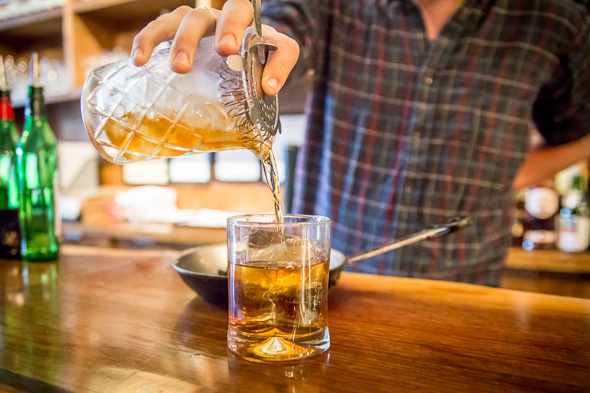 Combining 1Â¾ ounces of Maker's Mark bourbon with a Â½ ounce of Martini Rosso and Â¼ ounce of Martini Dry in a Yarai mixing glass, he stirs the alcohol over ice with 1Â½ eye droppers worth of cedar bitters. The drink is strained into our smoked glass, and served with a hand-cut king cube of crystal clear ice. It's still dramatic, but Nick is confident that he can pump them out over an evening without the bar coming to a grinding halt every time.

(Most of these ingredients can be found with a visit to a specialty spice store. We recommend House of Spices in Kensington Market)

Cut cedar sheet in half, and torch one half to char it. Chop all into small pieces, then combine ingredients into a mason jar and steep for at least two weeks. 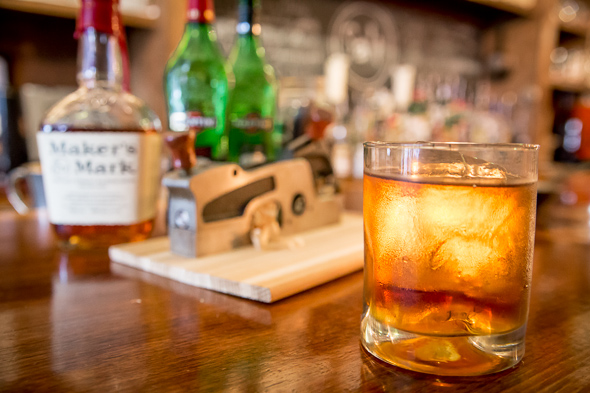