It seems that even scorching temperatures are no deterrent for hungry food enthusiasts eager to sample the city's latest eats. It was still delicious madness at Sunday's TO Food Fest in the east end. It was hot. It was humid. But Scarborough's annual TO Food Fest celebrated its second year at the Chinese Cultural Centre's building and lot with a wide array of treats (all less than $10) showcasing the area's multicultural flair.

For a visual recap of the event, check out this slideshow of 20 tastes from the festival. For more on the vendors, read on.

Thousands of event goers braved long lines and minimal seating to sample the diverse eats of more than 40 participating vendors. For many participants, the event was their pilot service, with only a third of vendors returning from the previous year. 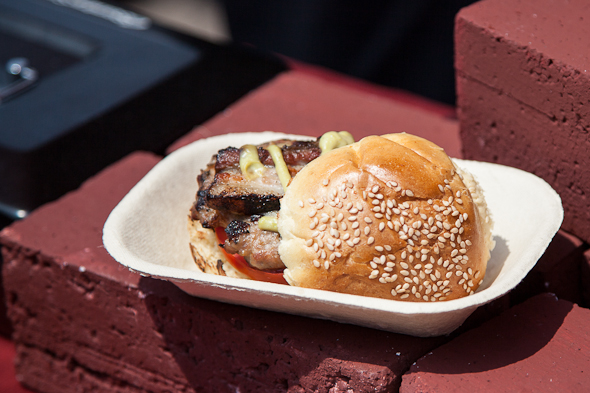 Luckily, offerings went beyond the ubiquitous taco or meat skewer. From Casbah's camel burgers, to handheld meat pies from Aussi stand Kanga, the menus were exciting and diverse. Still, in such sweltering heat, the lemonade stand easily became one of the longest waits of the entire festival. 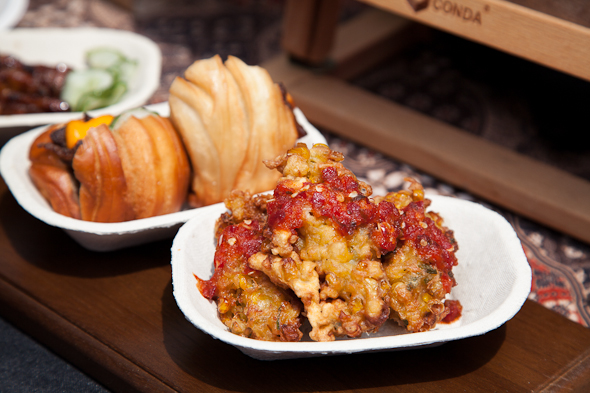 I began with Indonesian street food vendor Babi & Co.'s most popular item: Babi on a Bun ($6), or two fried chinese buns stuffed with braised pork belly and topped with pickled cucumber and sambal mayo. Sambal, or Indonesian chili sauce, added a flavourful punch to the dish.

Wanting to escape the sun, the next dish came from one of the indoor vendors, Urban Acorn Catering. While I sampled the duck confit wontons ($5), it was clear the chickpea sliders were the main attraction. Most stands had a vegetarian option, though one of the two food trucks at the event, Portobello Burger, catered specifically to veggie lovers offering gluten-free and vegan options. 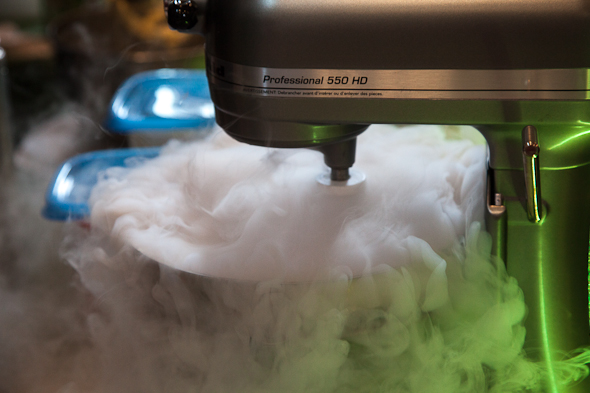 For dessert, liquid nitrogen ice cream made on-site was definitely a crowd pleaser. But they weren't the only ones dabbling in molecular gastronomy. Nearby, a pastry chef created a modernist dessert shot ($2) complete with cola "bombs" set in a calcium solution, strawberry foam and freeze-dried caramel. Though the overall texture and taste of the dish wasn't anything too spectacular, it was definitely different and pretty to look at. 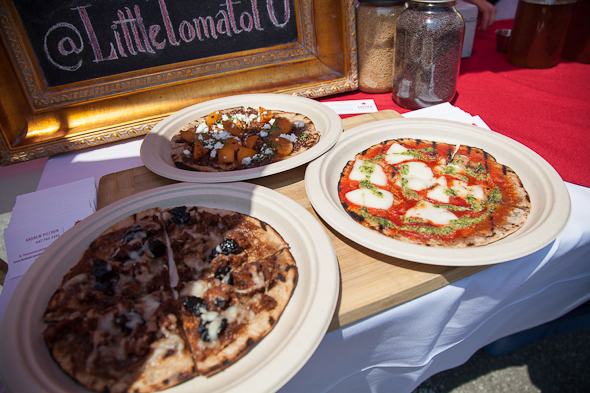 I hoped to cap off the day with a fresh-from-the-fryer churro, but didn't have the patience for the queue. Instead, I opted for one of Little Tomato Catering's pizetta's ($6) created specifically for the festival: grilled apricot with chĂ¨vre on top of a house made maple-onion marmalade. With fig as my all-time favourite pizza topping, I was hoping for the right balance of sweetness and creaminess from the pie. The apricot was a little too tart, but the marmalade was great, and was available separately for purchase.

Organizers hoped the event would bring food lovers to the city's east end to experience some of the homegrown culinary talent. Scarborough favourites like Marathon Donuts & Coffee and Big Moe's burgers were definite hits at the festival. Overall, it was great to see the borough's best and up-and-coming chefs highlighted in such a lively atmosphere.

Judging from the turnout, it looks like successful food festivals don't need to be tied to the downtown core, though it wouldn't be surprising to see some popular vendors establishing themselves there soon.