12 local beers to drink this summer in Toronto

While it seems to be arriving in spurts, summer is nearly upon us here in Toronto. It's a special time in the city when the sunglasses come out, we start to show a little more skin, and we queue up for a space on one of the city's great patios.

It's a also a time in the city when put away the heavy, boozy beers that kept us warm all winter and look to a crisp, refreshing beer better suited to long, lazy days in the sun.

With that in mind, here are a dozen of some of the best local offerings for easy summer drinking, as well as some info about where you can get yours.

Bellwoods Brewery's Wizard Wolf
My current beer obsession, Wizard Wolf is Bellwoods Brewery's answer to a session ale. Usually known for heftier brews like their Hellwoods Imperial Stout or the boozy double IPA, Witchshark, Wizard Wolf weighs in at a-perfect-for-an-afternoon-of-drinking 4.8%. Unlike other beers that opt for a lower ABV though, Wizard Wolf manages to retain all the big hoppy aromas that bitter beer lovers crave (seriously, the smell is amazing) and the taste is all mango and citrus.

Where it's brewed: 124 Ossington Avenue
Where you can get it: Available on tap at the Bellwoods Brewery Pub or in the bottle from their retail store at 126 Ossington (you may also see it pop up in a few of the city's beer bars, too)
Where you should drink it: If you're lucky enough to get one of the few available seats, drink this sitting on the Bellwoods patio just a few yards from where it was brewed, but if the patio's full, a four pack of Wizard Wolf shared with a couple friends in Trinity Bellwoods makes for a nice little afternoon, too.

Steam Whistle Pilsner
With so many craft brewers popping up in Toronto these days, the good beer folks seem a little under-appreciated in the Big Smoke. Sure, being present in virtually every bar in the city and enjoying a national audience means it's becoming increasingly difficult to think of Steam Whistle as one of the "little guys," but they're still locally owned and operated and, most importantly, they're still cranking out a near flawless crisp and refreshing European-style pilsner.

Where it's brewed: The historic Roundhouse at 255 Bremner Blvd
Where you can get it: Direct from the brewery, The LCBO, The Beer Store, various bars
Where you should drink it: While last year I might have encouraged you to have a few brewery-fresh beers at the Roundhouse before a Jays game, this year Steam Whistle managed the landmark feat of becoming the first local beer available in the Roger's Centre. It's only available from one vendor on the 100 level right now, but it's worth the hike to let the powers that be know you'd prefer a cold can of local stuff while you watch our team lose again.

Junction Craft Brewery's West Toronto Weisen
Junction Craft Brewery is actually something of a best kept secret when it comes to beers you can drink all day: the majority of this small brewery's offerings weigh in at around (and often less than) 5% so while all their beers are big on flavour, they don't pack the boozy wallop that some other flavourful beers do. Their as-yet-unreleased Weisen will surely fit that bill too. It's a 4.6% ABV, traditional German Wheat beer with just 10 IBU, meaning this one is sure to go down easy. And, proving that Junction Craft is a brewery after my own heart, they'll be launching the beer as part of a "Wheat Beer Breakfast" in mid June. I'll bring the maple syrup.

Where it's brewed: 90 Cawthra Avenue Unit #101
Where you can get it: (soon) Direct from the brewery
Where you should drink it: Who am I to question the wisdom of Junction Craft's Tom Paterson and Doug Pengelly? Drink it with breakfast!

Muskoka Brewery's Summer Weiss
Newly available in handy 355ml bottles in six packs or cases, Muskoka's Summer Weiss is an amazing, unfiltered, aromatic wheat beer with aromas that will remind you of cloves, bananas, and juicy fruit. This beer deserves a permanent spot in your fridge this summer and is so well-suited to summer drinking that we were willing to stretch the idea of "local" up highway 400 just a bit in order to include it here.

Where it's brewed: A brand new brewery at 1964 Muskoka Beach Road in Bracebridge Ontario
Where you can get it: Direct from the brewery, The LCBO, The Beer Store, various bars
Where you should drink it: This one's ideally suited to drinking beside a body of water in a Muskoka chair. If you aren't lucky enough to have a cottage, a kiddy pool on a rooftop patio in the Annex will also do in a pinch. 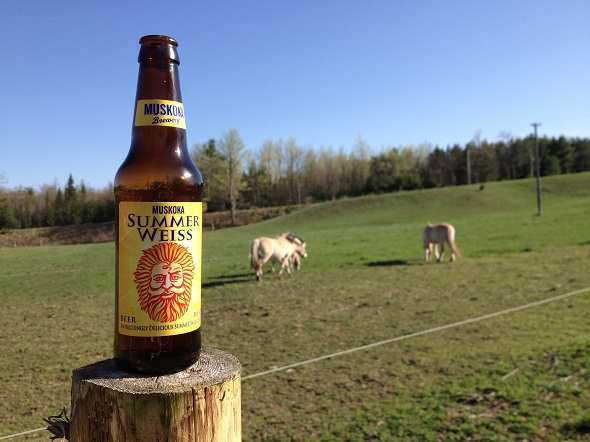 Kensington Brewing Company's Fruit Stand Watermelon Wheat
The latest beer from Kensington Brewing Company features just a touch of watermelon juice that's added during the fermentation process and manages the beer/fruit combination without destroying what most people like about beer; namely that it tastes like beer. There are floral and juicy aromas and a barely perceptible sweetness of watermelon but they're really only evident the more you drink the beer--and luckily, at just 4.5% ABV, this beer's ideally suited to drinking more of it.

Where it's brewed: For now, Wellington Brewery at 950 Woodlawn Road West in Guelph, but eventually it will be produced at KBCo's new location at 299 Augusta Avenue.
Where you can get it: various bars (Check out the Kensington Brewing Company website for locations)
Where you should drink it: While it seems obvious that this one is best enjoyed in Kensington Market, it doesn't appear that any bars in the market are carrying it yet so...Victory Cafe, I guess?

Cameron's Cream Ale
Those who insist their beer needs to be hoppy/complex/unfiltered/brewed with cardamom etc. can feel free to just skip this entry (or, more likely, just skip to the comments section to express your disagreement), but in the summer there's a certain place for a perfectly inoffensive, well-made, crisp tasting beer--and Cameron's Cream Ale is just that. It's not going to blow your mind, but beer doesn't always have to. To be honest, Cameron's Cream Ale isn't even the best beer that Cameron's brews, but if you're looking for an excellent cream ale, this oft overlooked, malt-forward, subtly sweet beer that's been around since 1998 will do the trick quite nicely.

Where it's brewed: 1165 Invicta Ontario, Oakville Ontario
Where you can get it: Direct from the brewery, The LCBO, The Beer Store, various bars
Where you should drink it: While performing a summertime task that necessitates cold beer: think grilling or post yard work.

Beer Academy Kolsch
Some craft beer enthusiasts may have issues with The Beer Academy given it's big-brewery overseer (the place is owned by Molsons), but the fact remains that the people who work and brew there are passionate about beer and make some tasty stuff. Case in point, their Kolsch. It's a bright, refreshing beer with biscuity aromas and a hint of citrus. Interestingly, whereas most Kolsch-style beers focus on a clean, filtered look and taste, the Beer Academy has opted to keep theirs unfiltered, lending it a cloudier look, a slightly lengthier taste, and a healthy dollop of white head.

Where it's brewed: 75 Victoria Street
Where you can get it: Buy it in growlers or in 625ml bottles directly from the Beer Academy.
Where you should drink it: Crack a growler of Kolsch with a nice brunch to help get over last night's late evening and get your sunny afternoon off on the right foot.

Amsterdam Framboise
Recently re-released in the LCBO at the urging of the beer's loyal following, this Amsterdam brew boasts 2.2 pounds of fresh raspberries in every 750ml bottle, making the beer a brilliant red colour with an exceptional raspberry tartness. It's not exactly the first thing people reach for when they think of a cold beer, but this Toronto-made classic definitely earns its sport among easy drinking summer beverages.

Where it's brewed: 45 Esandar Drive
Where you can get it: In 750mL ceramic, swing-top bottles direct from the brewery and from select LCBOs for a limited time.
Where you should drink it: On a picnic date with someone who claims "I don't really like beer." Use this beer to begin showing that person the error of his/her ways.

Black Oak Brewery's Ten BĂŹtter Years
You can only drink so many wheat beers and fruit beers before you just need some damn hops. There is no shortage of hoppy brew on the Ontario market these days, but why not grab this excellent Etobicoke-made imperial IPA? Recently added to the brewery's full time lineup after years as a seasonal favourite, Ten Bitter Years packs a healthy 8% ABV and has all the big pine, grapefruit, and mango hop flavours you'll need to kickstart your evening after a day spent drinking sessionable beer.

Where it's brewed: 75 Horner Ave #1 Etobicoke, Ontario
Where you can get it: Direct from the brewery, The LCBO
Where you should drink it: Drink this one after chilly late night skinny-dipping and let its high alcohol and bitter taste help restore feeling to all your extremities.

Great Lakes Brewery's Miami Weiss
The city's craft beer contingent will be very happy to learn this excellent Great Lakes Brewery summer offering will be back on shelves very soon. A more hop-forward beer with great mango and floral aromas, this non-traditional wheat beer--with it's piney, bitter taste--actually has more in common with an American Pale Ale than a weiss beer, but it retains a soft and light-feeling body, ample carbonation and a nice big head and weighs in at an-oh-so-sessionable 4.5%.

Where it's brewed: 30 Queen Elizabeth Boulevard, Etobicoke, Ontario
Where you can get it: (soon) Direct from the brewery, The LCBO
Where you should drink it: On a beach, wearing a white blazer with the sleeves pulled up, obviously.