While the renaissance in coffee culture has focused ample attention on the products of the espresso machine, nowhere near as much attention has been paid to the simple cup of joe - the humble mug of brewed coffee that used to be the first and only thing most of us thought of when they ordered a cup of coffee. Bean quality has certainly gotten better, but what makes it into our paper cups is the same drip or percolator coffee that our grandparents would have known, poured from urns or carafes with a quick, careless gesture in diners everywhere. 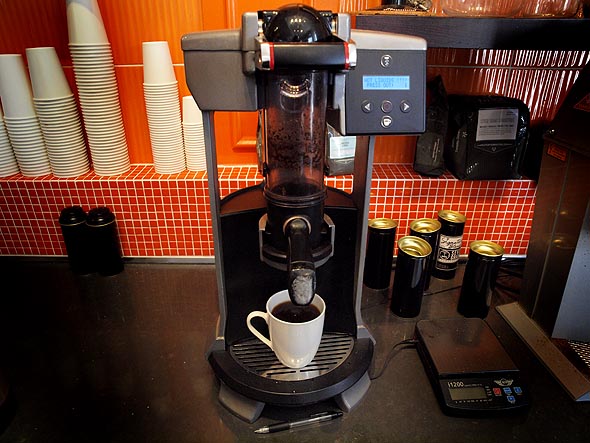 CONCEPT
There are cafes in the city offering specialities like siphon coffee and cold drip coffee, but Seven Grams near Avenue and Davenport is the only place in Toronto with a Bunn Trifecta machine - the most high tech solution to the question: "How do you make the best damn cup of coffee ever?"

Barista Adam takes me through the Trifecta concept, which is a highly engineered elaboration on the sort of "full immersion" coffee-making method that most people know from the French press. In essence, more flavour can be extracted from coffee grounds that are soaked and agitated before they're decanted into a cup. Under extraction will accentuate the sour notes in the coffee, while over extraction will make it more bitter. It's like cooking a steak, Adam says - you have to walk the fine line between raw and burnt.

The Trifecta sitting behind the bar at Seven Grams isn't an intimidating machine, with its simple clear brewing tube and a control panel with just a few buttons, but Adam says that it's definitely not something you'd want for home use. There are just too many parameters that you can program for - parameters such as water temperature, soaking and agitation time that are almost infinitely adjustable without some prior knowledge of how the machine works with different varietals of beans.

"It's paralyzing how many options there are," he tells me. 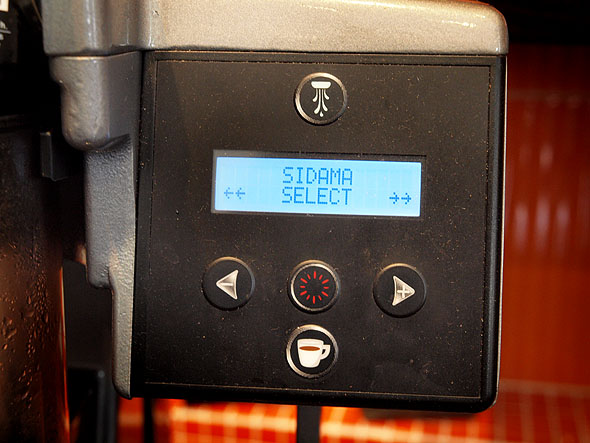 EXECUTION
While setting up the Trifecta is very nearly rocket science, brewing a cup is actually fairly easy. Adam cleans the machine's tube and filter out carefully, then sets chooses the preset for Ethiopian Sidama coffee; the preset, he tells me, was programmed by an expert brought in by the cafe's owners. "The guy who programs this has a lot more knowledge than me," he says.

After carefully measuring out 18.5 grams of beans, he puts them through a grinder, producing a grind slightly finer that what you'd use for drip coffee. He shows me the super fine metal filter - a disc of metal so carefully machined that you can't see any light through it.

He puts the coffee in the filter cup, secures it to the brewing tube and hits the button. An LED display runs through the process, from the soaking to the turbulence that makes the coffee look like it's boiling in the tube. After a minute or so, the coffee begins to shoot into the cup below, pushed through the filter with some generous air pressure. 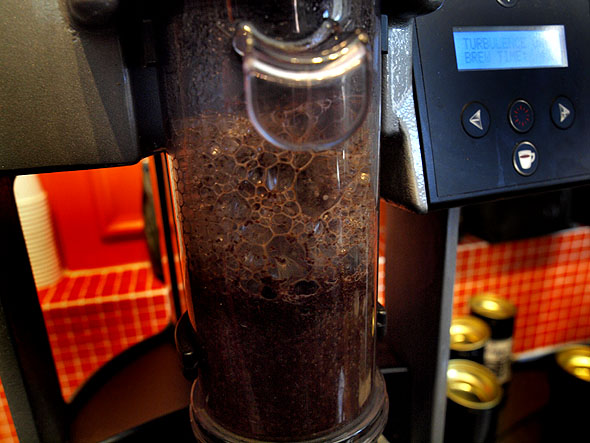 VALUE
The resulting cup is what you'd expect - black coffee in a white mug. The java looks a bit denser than your average cup of drip coffee, almost cloudy, and it's retained the cherry-sweet aroma of the Sidama beans.

At $4.25 per cup, Seven Grams strongly suggests that you don't add dairy or sugar if you want to really appreciate what you've paid for. What I taste might probably be the most perfect cup of black coffee I've ever had - the slight sourness and bitterness that come with any decent coffee bean are there, to be sure, but there's also a depth of flavour that actually seems to increase as I sip my way through the cup, first in the cafe, then walking south through Yorkville.

Seven Grams' Trifecta coffee might not be to everyone's taste, but for hardcore coffee lovers who enjoy the whole range of taste you can wrestle from really good beans, it's worth every penny.