In a previous coffee challenge, I suggested that you didn't see many coffee drinks with honey because, as sweeteners go, its floral richness was probably a lot more suitable for tea than java. As if to prove me wrong, I was told that a Toronto cafe has showcased a coffee drink with honey on its menu, so it was obvious that I had my next destination. 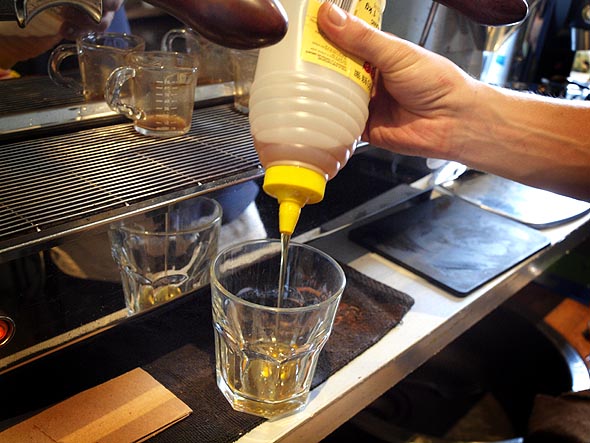 CONCEPT
The front window of Cafe Novo probably has one of the most peaceful views in the city, looking out over Bloor Street West to the northern edge of High Park. It's as close to pastoral as you'll get in the city without being right in the park, so it's appropriate that they serve a coffee flavoured with a substance that's pure nature.

Honey, after all, can't be sold with additives. A natural disinfectant and preservative, it wouldn't exist without bees or flowers, both of which I understand we haven't been able to produce in stainless steel trays in industrial parks yet. Honey has roughly the same relative sweetness as an equivalent amount of white sugar, but it's hardly as neutral in taste, and it's safe to say that anything sweetened with honey will taste of honey.

Which is to say that coffee purists might want to stay away from Cafe Novo's latte au miel, if their daily goal is to suck down a lot of coffee's essential flavours - the dark, the bitter, the chocolate - in their cup. Honey doesn't go gently into that good night; it'll make itself known, in all but the smallest quantities, and Novo's latte au miel packs a considerable honey punch. 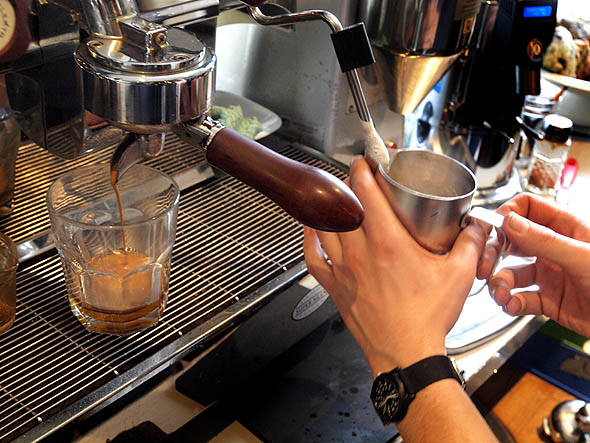 EXECUTION
On a chilly weekend morning, barista Alex takes me through the very simple steps of creating the latte au miel, which he says began simply as a latte served with a spoonful of honey instead of a packet of sugar.

A scant ounce of Billy Bee honey gets squirted into the bottom of a heavy glass before Alex pulls a long shot of espresso, then steams the milk. He pours the shot into the glass first, and says that the hot coffee hitting the honey immediately changes the way the espresso tastes, even though it only dissolves a thin top layer of the honey. The milk goes over this, and the coffee Alex serves me has a very visible layer of undissolved honey lurking at the bottom of the glass. 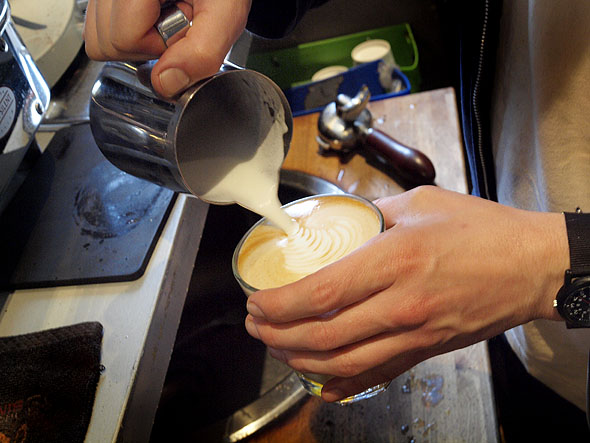 VALUE
Novo's latte au miel comes in two sizes, priced at $3.90 and $4.65, and which one you get probably depends on how much honey you want to taste in your drink. A few quick sips of the frothy top is infused with honey, and isn't at all unpleasant.

Alex says that some customers like to forego a spoon and let the honey wait for them - a rich shot of sweetness at the end of their drink, like people who like their espresso to finish with a bracing mouthful of coffee syrup.

Mixing the honey into the drink changes the character of the latte entirely; there's a sweet, floral bite to honey, and even a faintly medicinal note, that will battle to the top of anything, and it's hard not to imagine the latte au miel as the sort of drink you save for a day like those we've had too many of lately, full of damp cold and a hint of some final winter cold that needs to be kept at bay with something warm and sweet and restorative.