Last year we introduced you to Barry Stein and Barry Bernstein, the co-founders of Still Waters Distillery, Ontario's first micro-distillery. Back then the Barrys were distilling an award-winning vodka while patiently waiting for the day that they could unveil their small-batch distilled whisky to the world.

On Saturday April 27th, that whisky will finally hit the crucial three-year mark which is required by Canadian law in order to sell whisky and Still Waters will release the first few casks of their single malt whisky for retail sales.

Being sold under the brand name Stalk & Barrel, single cask offerings will be sold in a very limited run in individually numbered bottles. The whisky is handmade at Still Waters' custom-built copper still in Concord, Ontario and is made from 100% Canadian two-row malted barley.

The Barrys are quite pleased with the results of their three-plus years of waiting. "We think it tastes fantastic!" Barry Bernstein told me. "We are very proud of the results. We had our fellow craft distillers in the province taste this and they all agree it is excellent." As for tasting notes, Barry tells me that their whisky has hints of cloves, honey and butter pecan on the nose and is very smooth with honey, brown sugar, creamy vanilla and butterscotch on the palate.

This first run will be available for sale only directly from the distillery; however, interestingly, they'll also start selling their wares to Ontario residents online â a unique marketing angle for which Still Waters has only recently received permission.

Sadly, thanks in part to the lengthy process required to obtain LCBO approval and our province's high tax rates for liquor, Still Waters has opted to designate a majority of their whisky for sale outside of Ontario. "Our preference would be to sell it all locally," Barry Bernstein tells me, "but there is great demand for Canadian made whisky in other markets and we can get product out a lot quicker and even make a little more [money] in some cases by selling outside the province." 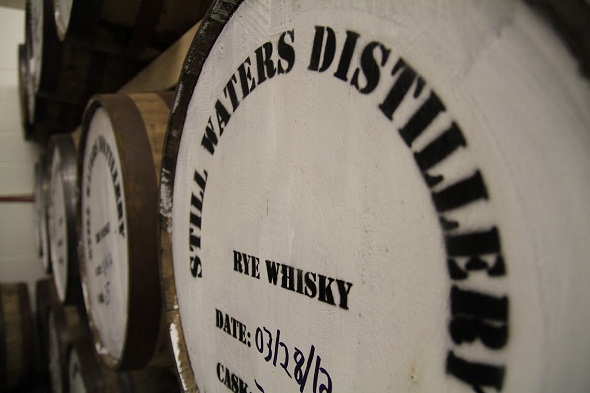 As for future offerings, the idea is to continue aging some whisky, but they'll be making decisions on quantity based on the success of this initial sale. "We will release our whisky to meet demand, while at the same time trying to hold some back for further aging," Barry says. "Although first indications are that we will have a problem meeting the demand."

Sales of Stalk & Barrel will begin at 10am on Saturday April 27th from the distiller's retail store at Unit 26 of 150 Bradwick Drive in Concord (a location that you can actually get within 2km of by transit if you've got the time..). They'll be bottling two casks at cask strength, which means it'll be the potent, undiluted booze exactly as it comes out of the barrel â roughly 60%-65% ABV â and these bottles will cost $99.95. A third cask will be diluted to 46% ABV and those bottles will retail for $69.95.

If you're interested, it's probably a good idea to get there early given the limited run and the fact that it's first come, first served. Otherwise you'll need to stay tuned to Still Waters' website for the opening of their online ordering system, which should go live later this week.

Ben Johnson also writes about beer and booze over on Ben's Beer Blog.