A few weeks ago Mill Street Brewery announced an extension to the Mill Street Brew Pub with the launch of a second location, dubbed The Beer Hall. The new location aims to take a sophisticated approach to the classic Bavarian beer hall and boasts not only an elaborate system that delivers beer directly from the nearby brewery but also an impressive still that will be used to distill biershnaps, a dry spirit that's not available anywhere else in Canada, meaning that for the first time in 70 years, spirits will again be distilled in the Distillery District.

I spoke recently via e-mail with Mill Street's brewmaster-cum-distiller, Joel Manning and Chef Elizabeth Rivasplata, who will be helming the new location's kitchen, about what Torontonians can expect at The Beer Hall and what exactly biershnaps is all about.

Can you tell me a little bit about biershnaps? Not only is no one in Toronto making it, I'm pretty sure you can't even buy it anywhere in the city (or maybe even the country?). What exactly is it and what does it taste like?

Joel: "Bierschnaps is not available in Canada — certainly not on a regular basis as far as we know anyways — and we are the only Bierschnaps distillery here. It's a spirit that is classically made in Germany by distilling beer into a clear, colourless spirit and adding a small amount of cane sugar. It is different from American schnapps which is a liqueur and very sweet — our Bierschnaps is quite dry and designed to show off the quality of the spirit, not mask it with sugar. It's made through a double distillation process that involves a beer still and a copper spirit still with a rectifying column that produces a very smooth, pure spirit. The distinctive malt and hop character of our beers are distilled with the alcohol and make our Bierschnaps a perfect accompaniment for a pint of your favourite Mill Street beer.

We'll have biershnaps brewed using a few of our beers and each will have unique characteristics. Our Tankhouse Bierschnaps will embody the bold flavours and smoothness of this beer, with Cascade hops on the nose and finish but with our signature five malts used in this beer providing a smooth maltiness reminiscent of an unaged single malt whisky. This biershnaps is 45% ABV. 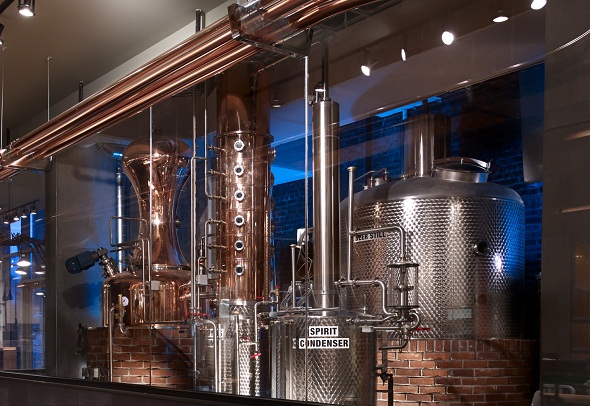 Where did that gorgeous still come from?

Joel: "The still was built by Kothe Distilling Technologies in Germany. It is a pair of stills actually — the stainless steel beer still and then the copper spirit still that does the second distillation along with the copper rectifying column."

Who will serve as your master distiller? Are you doing double duty as brewmaster?

Will we eventually see biershnaps for sale in the bottle, or is this something that will be exclusive to The Beer Hall? Can we anticipate an eventual LCBO release?

Joel: "The Bierschnaps will be exclusive to the Beer Hall and our retail store at the Brewpub in the Distillery District. You will be able to order it at our bars to drink in the pub alongside your favourite Mill Street beer or buy bottles of it in our retail store to take home. We will likely release it to the LCBO at some point in the near future but we don't have a date for that yet." 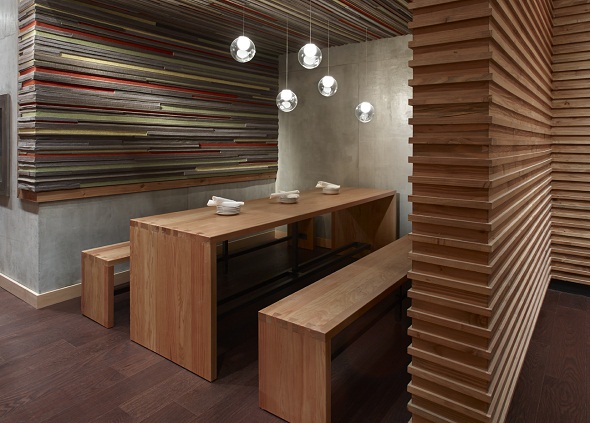 Any plans to broaden distilling operations? I know that you need to age whisky three years before you can sell it in Canada. Any chance there's a secret cellar at The Beer Hall with something awesome aging in barrels? Or is there Mill Street vodka or gin on the horizon?

Joel: "We will only make Bierschnaps to begin with — we are brewers first and foremost and we are making the Schnaps because it is a directly derivative product of our beer and it is delicious. There are a lot of vodkas and gins out there and we're not interested in getting into that game, but we will make malt whisky in the near future and squirrel some barrels away to bring out when it is ready in several years.

We have been working on recipes for it and we are very confident that we can make extraordinary whisky on this still — the double distillation technique that we are using is classically what is used to make whisky. Being at the Distillery District where millions of gallons of whisky were made over the years, I think that the ghosts of distillers past would be angry with us if we didn't.

We'll are also getting into some oak aging with our Schnaps products and will be coming out with a "Hopfenschnaps" which is a stronger (55% ABV) version of our Bierschnaps but loaded up with a ton of varietal hops. It is the hoppiest thing you have ever tasted in your life but it has no bitterness at all since the bittering acids don't come forward when you distill hops."

Can you tell me a little bit about the draught delivery system? Is beer actually piped directly from the brewery to these taps and to the still?

Will the Beer Hall feature a different beer lineup than the brew pub? Or can we expect beer exclusive to the new location?

Joel: "There are three new beers being made for the opening of the Beer Hall that will be available permanently. They are:

1. Minimus Dubbel (8.5% ABV). This is a classical dark brown Belgian abbey-style beer made with a variety of malts and traditional Belgian candy sugar. It has a soured mash in order to give it a slight acidity to offset the sweetness of the malt and the sugar and has aged hops used in it which is traditional for this style of beer. The Minimus also has French oak infusion spirals in it to give it an oaky softness that is also typical of these beers. It is served unfiltered. The name is from the latin expression "minima maxima sunt" (The smallest things are most important — Ben)

2. Distillery Ale (6% ABV) This is a copper coloured English-style Old Ale made with English floor malted maris-otter pale malt and caramel and chocolate malt and a whole pile of English Fuggles and Goldings hops. Old Ales are similar to Barley Wines only smaller. This is a style of English Ale that would have been around back in the old days of the Distillery District and the founders would have been very familiar with.

3. Ampel Weiss (3.8% ABV) This is a Berliner-style Weissbier made with a lactic fermentation and a blend of wheat and barley malts. Pale straw coloured, this is a very dry beer with a profound sour tartness that makes it extremely refreshing. We will serve this in the traditional way giving drinkers the choice of drinking it straight or with a "Schuss" (a shot) of raspberry syrup or woodruff syrup (imported from Germany). The beer is pale amber, the raspberry syrup is crimson red and the woodruff syrup is bright green which creates a "traffic light" (Ampel in German) effect when you try a flight of all three versions together at the Beer Hall." 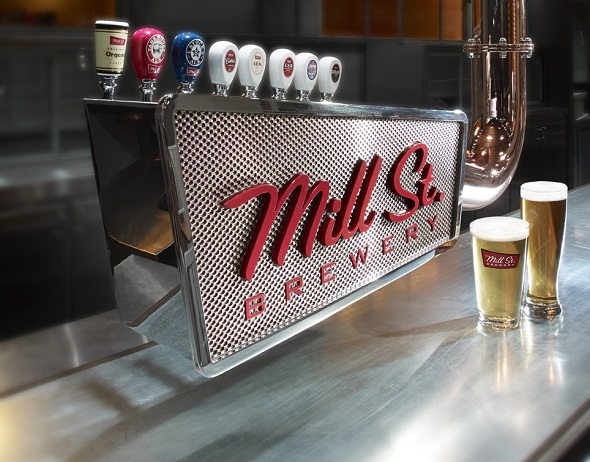 What about the food? Can we expect fancier fare, or will this be strictly bar food?

Elizabeth: "The menu is a sharing-style menu: seasonal, fun, and unpretentious. We'll be playing with some bar classics too and giving them our own twist."

I see that beer-infused items will be featured on the menu. Can you tell me what sort of food that will include? Will there be a variety of Mill Street beers incorporated?

Elizabeth: "We are trying to incorporate beer in most of the dishes from savoury to desserts. I would say 80% to 90% of the menu contains beer. We'll use Mill Street Organic to make flatbread dough fresh daily, we'll have Green Thai Curry mussels made with Mill Street Lemon Tea, braised short ribs with house-brewed beer glaze, Charcuterie boards with house-made cured meats like Tankhouse Ale bratwurst, and wild boar bratwurst. Additionally, all the menu items will feature a suggested beer pairing from Joel."

The Mill Street Beer Hall will officially open on Thursday, April 18th and the space's covered, 100-foot courtyard patio will likely open in mid-May in time for their grand opening party on Thursday May 23rd.