When we last checked in with Liberty Village Brewing Company, they were touting the homebrewed wares of brewmaster-to-be Eric Emery at a series of tasting events in their eponymous neighbourhood. Their goal at the time was to settle on a single beer or two they might begin brewing on a larger scale for commercial release and to find a place to do so.

Now, four months later, they've done just that. Having contracted the use of the facilities at another west end locale to brew their beer, last week the folks at LVBC invaded Junction Craft Brewery to make a batch of their beer with guidance from Junction Craft's brewer and resident brewing equipment MacGyver, Doug Pengelly.

As anyone who's brewed beer will tell you, it's really a lot of waiting around, and last Tuesday was no exception. Crafting LVBC's first batch of beer, however, was even more of a time-consuming process given that Pengelly's unique and custom-designed brewing system necessitates some detailed directions at every step of the process. As a result, watching the brewers collaborate was actually a lot like watching a teacher with students. Given that this is Emery's first brew on a large scale, the comparison seems apt, and it's an image aided by the fact that the folks on hand from LVBC Tuesday, including Emery, Cassandra Campbell, and Steve Combes, are all fairly young, fresh-faced, and eager and the bespectacled Pengelly is clearly in his element explaining technical elements. 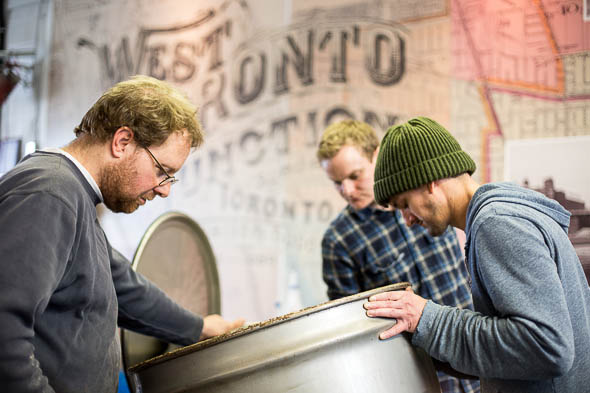 And while Pengelly at times seemed vaguely irked to have so many people in his house on brew day — a nosy beer blogger and a circulating photographer perhaps chief among the distractions — the collective effort of two of the city's neighbourhood breweries is just a natural extension of the city's flourishing co-operative brewing community. Toronto's craft brewers are all too happy share knowledge, equipment, and ingredients among one another and they're all sincerely interested in what other brewers are up to.

Indeed during my visit with Liberty Village Brewing out at the Junction, Jeff Broeders, brewer at the nearby Indie Alehouse popped in just to check things out and, as luck would have it, try some of LVBC's homebrew that they were smart enough to bring along for those periods of waiting around. 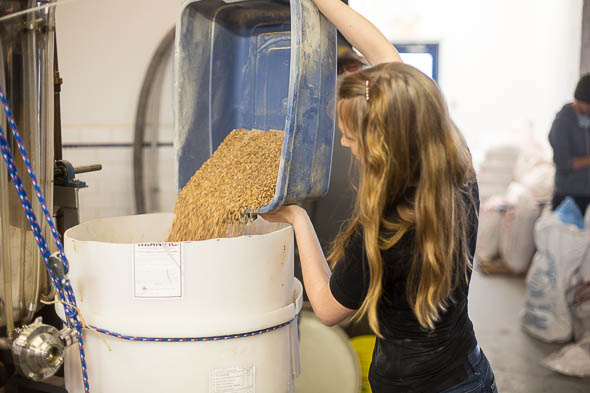 Yes, between grinding malt and heating the mash on the brewers' first brew day, we sipped some of their other homebrewing efforts, which included a great Gose beer they've been calling Gosebuster and even a beer brewed with gummi bears, appropriately dubbed Gummi Beer. While it's not in the cards just yet, it seems highly likely that some more of these homebrew recipes will find their way into the LVBC lineup someday, an inevitability evidenced by the fact that Emery shows a clear inclination toward experimentation and his beers are damn good. (Incidentally, Junction Craft brews were also among those sampled Tuesday and their new Wakatu Pale Ale and Shinkansen — named after the Japanese bullet train and brewed with their recently departed intern — are both worth a mention, too).

For now though, the Liberty Village Brewing Company is starting things off with a pale ale. Participants of the tasting events back in November might recall this beer as the dry-hopped offering from the second evening of tastings, except when this version eventually hits the market, it will be redubbed 504 Pale Ale, after the streetcar that services the area the brewing company calls home. 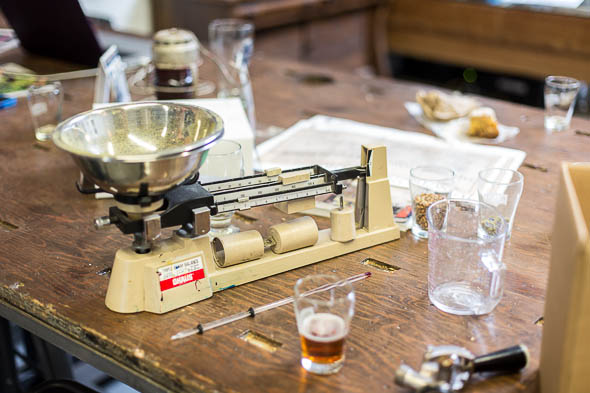 True to the spirit of their tasting events, they assured me that this beer is the one that had the most positive feedback during their initial event so it seems fair to assume it will likewise be a hit when it becomes available publicly — something you can likely expect to happen around mid-April. This first batch will yield just five kegs, one of which is likely destined to remain at Junction Craft Brewing, and four of which will show up at an as-yet-unnamed Liberty Village bar.

The long term goal for the Liberty Village Brewing Company is still a brewery in their own neighbourhood, but for now they are content to take things slowly and are happy for the guidance they're receiving contract brewing in the Junction. If they're lucky, they might even have Doug Pengelly's brewing set-up figured out before they can afford to move into their own digs.