Chains that rule late night dining in Toronto seem to always interrupt the path from last call to home in bed. These dining chains are attuned to our collective fallibility when it comes to late night hunger pangs, extending their hours into the wee morning to seduce us with promises of cheap eats. Consistency is key when it comes to the success of late night dining chains, and the 10 on this list have, indeed, proved the power of a familiar, reliable late night plate.

Here are 10 chains that rule late night dining in Toronto.

Ali Baba's
It's everywhere, open terrifically late, and perfect for when you just have a few bucks left in your pocket. Ali Baba's is perhaps the king of late night dining chains, with a dozen or so locations throughout the city and another one probably opening by the time you finish reading this post. The prospect of two pretty delicious shawarma wraps for under $10 is made even more delicious by way of the fact that you can get it as late as 4 a.m.

Smoke's Poutinerie
Nothing says "late night" like squeaky cheese and gluttonous gravy. Smoke's knows this. Emerging on the Toronto scene in 2008, Smoke's has since exploded with a fury only known to those touting double-smoked bacon. Smoke's has ten locations, and most are open until 4 a.m. on weekends, helping to ensure you don't end your night without a mound of wet fries sitting heavy in your stomach.

Pizzaiolo
Write it off as just another pizza chain if you must, but Pizzaiolo actually does make a pretty delicious slice. The toppings, believe it or not, are actually fresh and varied, and each location usually has more than a few vegan and/or vegetarian options on hand. With 18 locations in Toronto's downtown core alone, Pizzaiolo is certainly making itself known to the late night crowd, offering its "Soprano" pie and others until 4 a.m. at most spots on weekends.

Owl of Minerva
Ah yes, Owl of Minerva's beloved anytime pork bone soup. Though some refined palates attest to distinct differences between the Koreatown 3 a.m. bowl, the 5 a.m. Chinatown option, and the midnight Scarborough soup, few will leave without sucking down those last few drops. Open 24 hours, Owl of Minerva is good for those Korean cravings at any hour, though many fans stick exclusively to late night soup.

Ghazale
The Ghazale chain has snagged some superb late night real estate. It's strategically located outside of The Bloor for a shawarma after the show, right by the Village for post-club kebabs, and in the heart of College West for a bite after the bar. Ghazale, you dog. With many locations open to 4 a.m. or later throughout the week, Ghazale often proves both difficult to avoid, and to resist.

Gino's Pizza
Gino's Pizza is seemingly everywhere, blanketing Toronto with close to a dozen locations. Its pizza is classic, familiar, and not especially out-of-the-box, but if you're keen on a slice after last call, something from Gino's will usually suffice. Downtown locations are usually open until 1 a.m. or 2 a.m. on weekends, though seating is typically sparse. 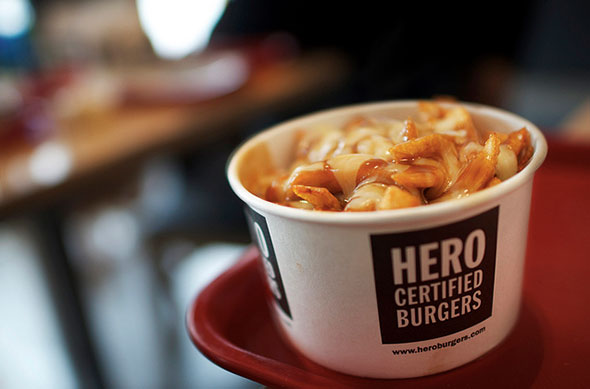 Hero Burger
Love it or loathe it, it's everywhere. And spreading. Hero Certified Burgers has entered the realm of 24-hour-availability with its Queen and Spadina corner post, though most locations stick to more "reasonable" hours, and only stay open until 3 a.m. or 4 a.m. It's not upscale dining by any means, but it is a reasonably priced option when you want an alternative to the midnight fast food burger.

Amato Pizza
Sure, it's had a few, um, staffing hiccups but several Amato locations have managed to survive (and thrive?), offering their take on "REAL" pizza to the late night pie-enthusiasts. Good for a cheap slice and a pop before heading home to bed, with the locations on College and Yonge open especially late (4 a.m.) on weekends.

Pita Land
Can you find better falafel in Toronto? Probably. But Pita Land's strategic self-placement and regular night-owl-friendly hours have allowed it to creep forward in terms of late night chain dining domination. The Middle Eastern restaurant has outposts at Bloor and Sherbourne, River and Dundas, King and Sherbourne, and other major intersections, but its Ryerson-adjacent spot on Gerrard is certainly one of the busiest (and best?) of the lot.

Mamma's Pizza
Pizza just like mamma used to make, I suppose, just as long as your mother worked at an Ontario pizza franchise. Mamma's Pizza has a handful of locations across Toronto and the GTA, with several spots open late on weekends (1 a.m. to 4 a.m.) the closer you get to the downtown core.