How hard is it to operate a food truck in Toronto?

Toronto's food renaissance has been marching on relentlessly for the past few years--2012 saw the arrival of some truly exciting culinary talent. A great deal of hype accompanied the launch of David Chang's Momofuku at the newly opened Shangri-La, which perhaps best epitomized the direction that the food scene (both in Toronto and on a global scale) has been headed of late: a gentrification of street food.

Line-ups snaking around the block for humble tacos or mere ramen is a common sight these days, and the Toronto Underground Market became the launchpad for numerous successful businesses this year: most recently, with the 6 month-turnaround of Rock Lobster from Kensington stall to 65-seat restaurant.

Street food, some have argued, deserves to stay on the street, and it's this sort of mentality that's made it s difficult to find a quick snack in a city with no recognised spaces to serve much else other than hot dogs. Many will look back on 2012 as the year that food trucks really came into their own, but a closer inspection of the terms they operate under has the future of mobile eats hanging in the balance.

William Randolph, owner of the recently launched British food truck The Feisty Jack, has been at the heart of those trying to address that problem. In business since October, William and his partner Jessica Sinclair have formed the Toronto Food Truck Association after having come across numerous obstacles and baffling regulations. As he puts it, "I think the food truck business is glamourized by shows like Eat Street. It's a brutal business, really."

With a long history of restaurant ownership in his family, and chef schooling at Leiths in London, William has grown up in both the UK and Toronto. Upon deciding to join the burgeoning food truck scene, William opted to build his own truck rather than buy one ready-made: "Seeing food trucks going for $150,000 made me think about doing a lot of the work myself." Jessica adds, "Most of the trucks were originally Purolator or UPS trucks that have been retrofitted." 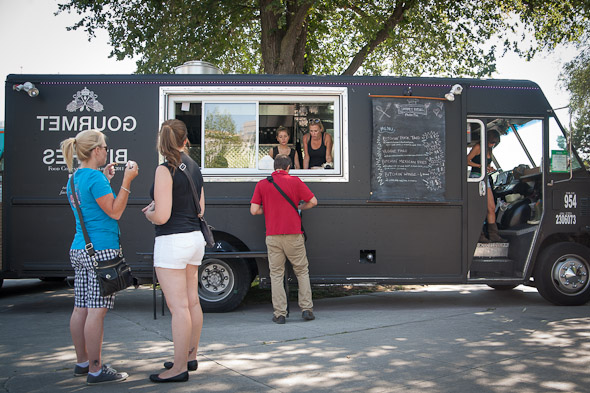 What exactly is needed to operate a food truck? "You'll find everything in our truck you would expect to find in a restaurant: a four burner oven, stove, griddle, deep fryers, fridge freezer, triple sink and water system. We're graded the same exact way by health inspectors as restaurants." In fact, it seems they're even more heavily scrutinized, with health inspectors frequently waiting at vending sites to perform checks on arrival. William is proud of the standards attained in the industry: "No food truck has failed an inspection yet in this city."

Still, with all the work in getting started and the stringent regulation applied to the trucks, it remains illegal to pull up on the street and perform transactions for food. Unless, of course, the cash transaction is happening elsewhere (like inside of an adjacent storefront). The regulation does not prevent the distribution of food itself, just the vending of it. It's a confusing situation, made worse by what happens when the City of Toronto actually does invite food trucks to sell. Toronto, William argues, is still playing catchup when it comes to embracing food truck culture: "There is no specific food truck license. It's the same license as that for a hot dog vendor."

This means holding a permit for only one area at a time, which can be enormously difficult to negotiate in the first place. Since launching in October, The Feisty Jack has only been able to sell food to the general public in Toronto on four occasions, with the truck losing money each time, especially after permit fees of $100-$2500, and paying between two or three staff per service. He doesn't have to look far for examples of more progressive approaches: "In Niagara and St. Catherine's, for example, they have a limited number of licenses for food trucks, but the trucks can park anywhere they want" However, "there's respect for the restaurants in the area," and trucks will not park close to existing restaurants.

The reputation of low overheads when operating a mobile food service appears to be a myth, too. Jessica explains: 'We don't have access to the same kind of storage and refrigeration that restaurants do. Every time we go out, we have to go and stock our fridges for that day. If we run out, we run out; if we buy too much, we lose money."

For William, much of his private events business (where the real money is) comes from being seen at public events: "People see you, and they want to have you at their birthday or office parties." With only four public services, he's been able to generate enough bookings to sell about 3 days a week. There are other revenue streams, too. A lot of Feisty Jack's business comes from delivery to various offices: food is pre-paid, and then delivered to the office.

Still, even with extra revenue streams, William wants Toronto's food trucks to become a more regular part of the urban landscape, and to be respected as a legitimate contributor to the city's marketplace: "For 99% of food trucks, our product is from local Toronto businesses. We're not running off to Costco; we are part of the Toronto economy." 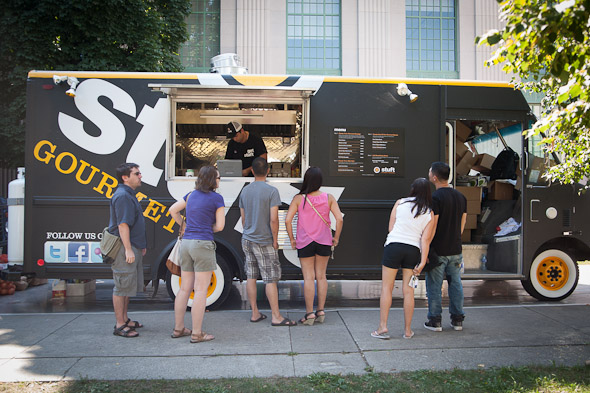 The inaugural meeting of the Toronto Foodtruck Association proved to be a revelation--William and Jessica's sentiments were shared universally, and the uptake on formulating a plan of action has been extremely enthusiastic, with every Toronto-based truck on board. "We all share the same concerns and difficulties," Randolph explains.

William's plan for the TFA involves a great deal of education for both city councillors, and also restaurant associations, who he believes will benefit from understanding that food trucks like Feisty Jack are not trying to steal business away from them. "The people who go to food trucks just want a quick snack; they don't have time to sit down and order food," William says. "There's room for everyone." The lack of understanding, he argues, is causing friction that everyone in the industry is feeling.

He says that it's not uncommon for him and others to receive threats of violence and intimidation, even when they're not vending at all. Just the presence of the truck is enough to unease local business owners. Some work is needed to build relationships with Toronto's many BIAs too: "They need to understand that this is not a trend. We're not leaving."

Another aim of the TFA is to establish best practices, like implementing rules about things like making garbage and recycling facilities available, and ensuring that trucks are not leaking: "We don't want to leave a footprint behind."

When asked if he'll open his own restaurant, William replies "We've been approached to open a restaurant, but I've turned it down." Jessica adds, "Some people prefer the mobility." This mobility means flexibility, and if William and the TFA make any real progress this coming year, it means that they should be able to operate as a real part of the city, rather than as things stand now, with food trucks on the fringes, invited to be part of urban events only when it suits City Hall. 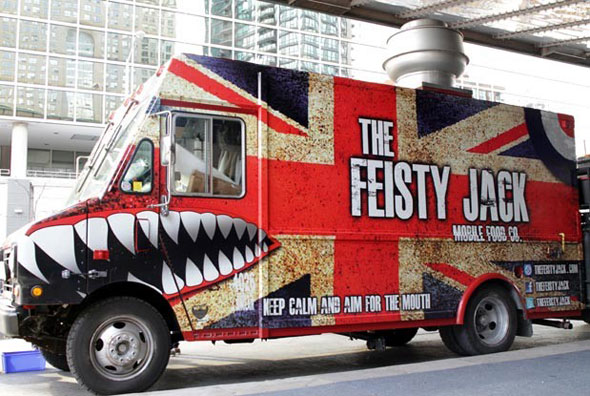 In the meantime, The Feisty Jack will be serving food from the kitchens of El Mocambo from next week, with service from 8am-2pm, and 6pm-10pm (later on Fridays and Saturdays).