The start of this week was not without a certain air of intrigue. "50 metres East of Yonge. North side. Grey SUV," is all that the text message I received on Monday morning said. Despite being anxious, and vaguely hungover, I prepared myself for what lay ahead. This was serious business, after all: we were tasting a new beer from Hogtown Brewers.

The ominous texter, and my ride, was Noel Chambers, CEO of Hogtown Brewers. With him was David Jeffrey, Hogtown's first and only full time employee, and we were en route to pick up Ken Dubin, their self-described "beer geek," before heading to Cool Brewery in Etobicoke to sample the fledgling brewing company's sophomore effort; an as-yet unnamed IPA.

The vibe in the car was a mix of excitement and cautious optimism because, despite the moniker "Hogtown Brewers," the folks that run the company aren't actually brewers at all. Instead, the company comprises a mix of friends, colleagues, and rugby teammates, who love beer so much that they opted to invest in creating their own brand. And about a year ago, they did just that, enlisting the help of brewer Jay Cooke to create a Kรถlsch-style beer they unveiled as their flagship beer, Hogtown Ale.

They've enjoyed modest success with Hogtown Ale, getting into regular rotation in an eclectic mix of about 20 bars in the city which include the Shangri-La hotel, Little Anthony's, Hemingways, Cold Tea, 3030, and most recently, beer-nerd friendly Victory Cafe. 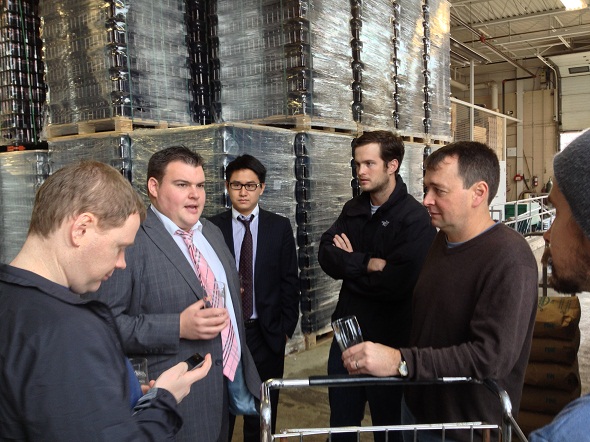 And so it seemed that if it were to fall short of rave reviews, the Hogtown IPA project we were about to try would be very short-lived.

Vince Maarsman, a staff brewer at Cool Brewing who worked with Jay Cooke on Hogtown's new beer, poured the first pitcher of their IPA--a cloudy, coppery, as-yet-unfiltered brew--and the guys from Hogtown anxiously divvied it up.

Off the top, the beer was all big floral and citrus aromas; likely owing to inclusion of Centennial hops. The immediate taste was bitter hops (in a good way) due not only to the fact that the recipe included Magnum hops but also because the beer had only recently been dry-hopped using Amarillo hops.

However, despite the fairly big hop profile (70 IBUs), the beer was well-balanced with a subtle, biscuity, malt backbone. It was a pretty smooth beer and, while it had a bitter finish and medium to heavy astringency, the fact that our sample had only recently been dry-hopped and was set to be cold crashed means that the final product will likely be considerably smoother and, once it's carbonated, less astringent.

In short, beer-lingo free terms: this may well turn out to be a very good beer. 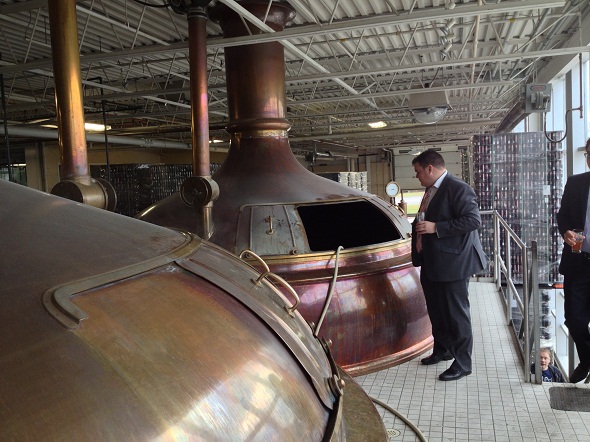 The guys from Hogtown seemed to concur. CEO Chambers noted flatly, "I love this," and Hogtown President Peter Shippen, who joined us for the tasting, also had positive feedback-- despite being an admitted fan of less complex beers (and the driving force behind a Kรถlsch-style flagship beer).

Interestingly, Hogtown has opted to sell their IPA--now christened "Hog Wild"--unfiltered; a decision that means they'll likely retain some of the beer's big aromas and, perhaps not unintentionally, offer something a little different to a Toronto beer scene fairly flush with IPAs at the moment.

You can expect to see Hogtown's limited run Hog Wild IPA in Toronto bars as early as this weekend as they've already pre-sold a number of kegs; but get it soon, because it might not be around forever.

If you're a fan of the company's easy-drinking Hogtown Ale, you may also be interested to learn that the guys from Hogtown are working on an LCBO release and you can expect their Kรถlsch-style beer in 473 mL cans sometime around April or March.