This past weekend, two extreme, endurance-testing sports descended upon Toronto: a 42-km marathon and the Smoke's Poutinerie World Poutine Eating Championship.   Personally, an evening of all-you-can-eat sushi already tests my own gastric limits, so I had to observe this perplexing sport first-hand. 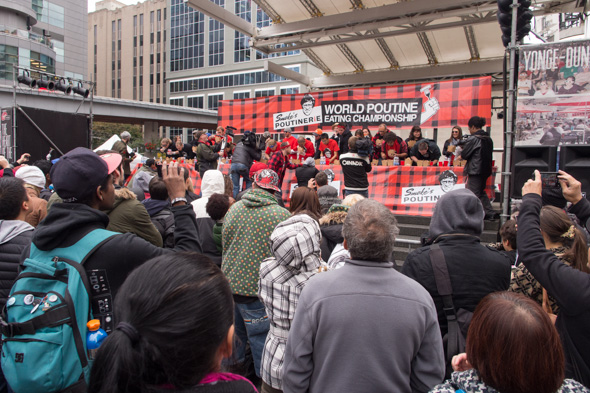 The amateur competitor kicked off the event at Dundas Square, eating 7 and ¼ pounds in just six minutes, for a lifetime supply of gravy, cheese curds and fries. But Dundas Square really began to fill up as the pros were ready to take their shot at the $5,000 grand prize. 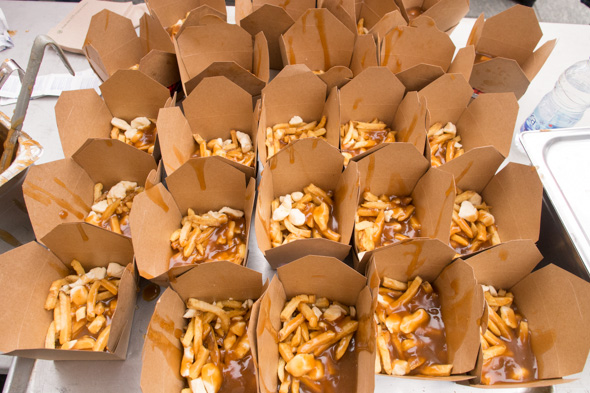 The big event was delayed as competitors were slow to arrive, and so that more food could be prepared--yes, this was the kind of game we were playing. An hour passed, and I contemplated throwing my name into the ring, just to dunk my cold, numb fingers into some steaming hot gravy. 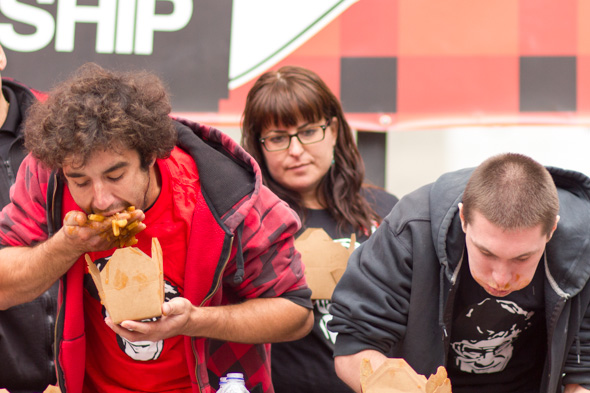 Despite the wait, the crowd stuck around to see Patrick "Deep Dish" Bertoletti defend his world record (13 pounds of poutine in 10 minutes). The reigning champ injured his knee and was on the verge of dropping out of the competition. But his good friend (and fellow competitor), Joey Chestnut, convinced him to take up the challenge, rented a car, and drove him in from Chicago. 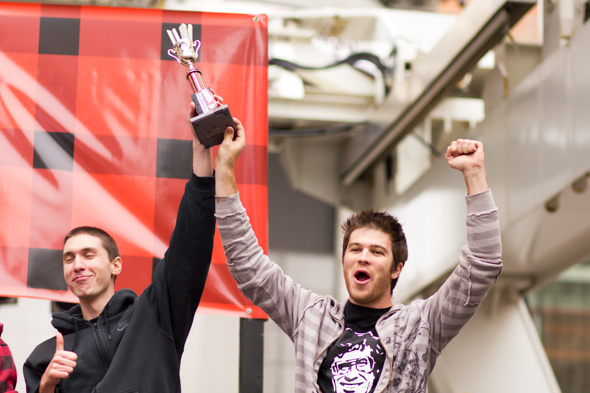 Bertoletti's return was bittersweet. Within 10 minutes, the poutine eating world was a different place. Bertoletti finished a surprising fourth with 8.4 lbs. Bob Shoudt and Tim Janus tied for second place after eating 8.5lbs each. 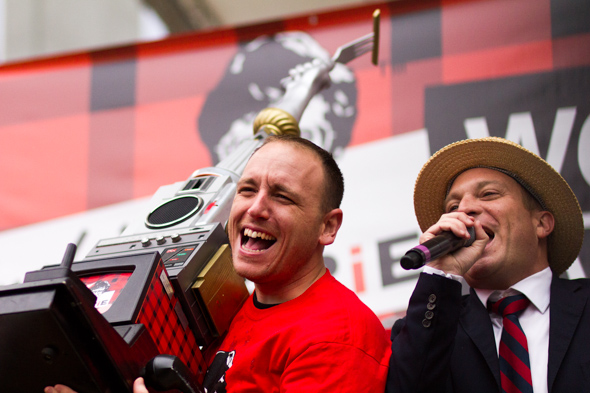 But it was Joey Chestnut who walked away the winner of the event--yes, the five-time Nathan's Hot Dog champ is tackling new territory. He won the event after polishing off 19 boxes (or 9.5 lbs) in 10 minutes.

I have to admit, I was surprised at how intense the world of competitive eating can get. If you're game to try your stomach at the sport, here's are some strategic moves I was able to suss out: 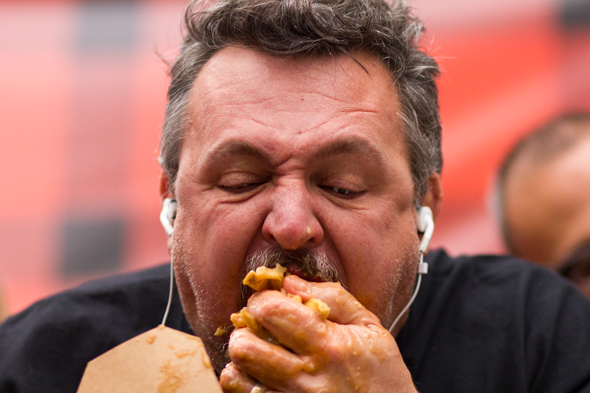 Psyching Yourself Up
It's all about getting into the right headspace. While the speakers at the event pound out adrenalin boosting tunes like Eminem and AC/DC, the pros stay in the zone by bringing their own set of noise-canceling headphones. But it doesn't end there. When the stakes are high, you'll want to psych out your opponent with coloured contact lenses, face paint, and a good pair of low-visibility sunglasses. 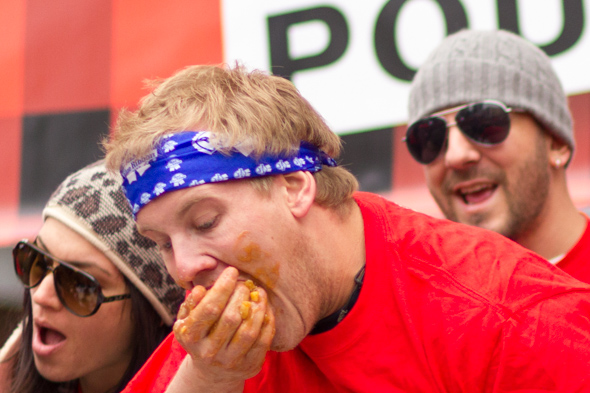 Hydration
The stage will be prepped with bottles of spring water, but any athlete worth their sodium intake will tell you that you have to keep your electrolytes in check. So while the amateurs slurp back water, the pros bring their own Gatorade and Vitamin Water. They come loaded with bottles of sugary drinks to keep their energy levels high and presumably large chunks of food down. 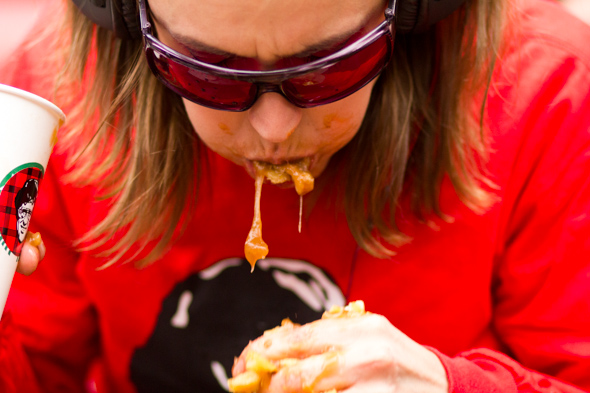 Eating Tools Are For Amateurs
Each competitor is provided with a set of gloves, but when you're up to your elbows in gravy, what's the point? A couple of amateurs and even a pro chose to use a fork to eat their poutine. Rookie mistake. This is not a time to savour. From what I saw, you need all the dexterity you have. Winners take their gloves off.

Chewing, Also, is For Amateurs
Remember, this is a sprint, not a marathon. 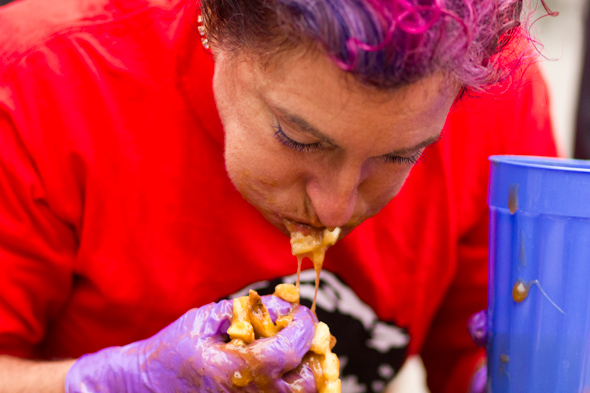 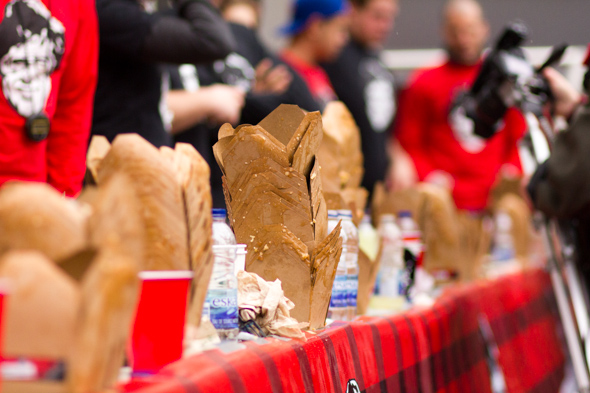