The top 5 Oktoberfest events in Toronto for 2012

Oktoberfest is one of my favourite times of the year. Not only do I get to consume vast quantities of beer from a stein but it's the one time that people don't look down on me for my proclivity for wearing weird German underwear in public and eating my body weight in sausage.

Steam Whistle's Oktoberfest
Saturday, September 29, 2pm-11pm
The Steam Whistle roundhouse
$25
The entertainment: The founders of Steam Whistle will host a traditional keg-tapping and there will be music and folk dancers, too.
Das Bier: Brewery-fresh Steam Whistle in massive one-litre steins that are included with the price of admission.
The food: Giant pretzels and sausages with saurkraut.
Best bet for: Fresh, local beer. 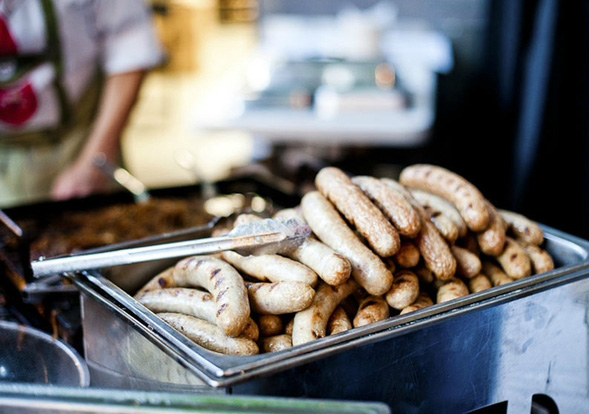 Toronto Oktoberfest
Thursday October 4 and Friday October 5, 5pm-12:30am
St. Lawrence Market - North Building,
Afternoon sessions $20, evening sessions $25
The entertainment: Toronto's first (that I can remember) official Oktoberfest, they're billing themselves as the city's "authentic" Oktoberfest, offering a "festhalle experience" with authentic food and German beer as well as "oompah bands, Bavarian dancers, lederhosen and dirndls, Bavarian Strongman, Miss Oktoberfest, blowing of the horn and much more." Does anyone else feel like listing "Miss Oktoberfest" next to the "blowing of the horn" was subliminal advertising?
Das Bier: De Konnick, Erdinger, Henineken, Stiegl, Lech, Tyskie, Weihenstephan, and Creemore (as well as a selection of ciders and some sparkling wine)
The food: Warm beer nuts served in a cone, Bavarian cheeses, giant pretzels, traditional sausages with sauerkraut, cabbage rolls, and goulash.
Best bet for: Authentic German food. Who can say no to warm nuts?

Oktoberfest Toronto 2012
Thursday October 25 - Sunday October 28
The International Centre
The entertainment: OK, I really don't know much about this one, and the website offers virtually no information about the food or beer that will be available, but I had to include this event just for this gem: "Oktoberfest Toronto 2012 will be hosted by the The world's Finest Social-Impact and Public Relations Robot! 'SICO' from the movie Rocky 4." Yep. When the highlight of your celebration of Bavarian culture is a prop from a 1985 Stallone movie, you know it's going to be a good time.
Best bet for: Robots 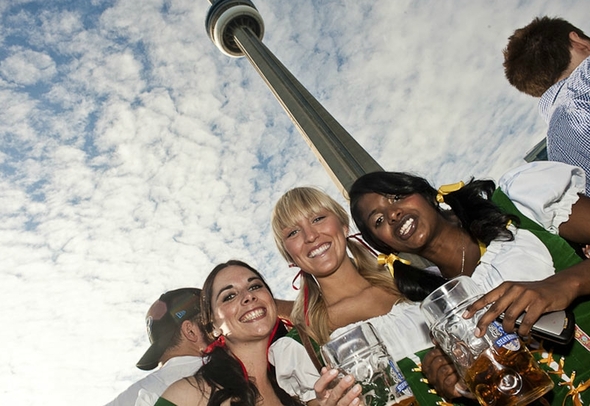 Kitchener-Waterloo Oktoberfest
Friday October 5 - Saturday October 13
Prices vary per event but most seem in the $10-$30 range.
The entertainment: This is the world's second biggest Oktoberfest and has been taking place for almost 45 years--in short, it's a big 'un. There are a handful of events taking place over the week at 15 different festhallen spread throughout K-W and, with a list that includes everything from a 5k fun-run to a fashion show and an Okotberfest iron chef, there seems to be plenty to distract you from the real work of drinking gallons of beer.
Das Bier: It sounds insane, but owing to what seems to be an increasingly corporate and family-friendly marketing plan, the word "beer" is virtually nowhere to be found on official K-W Oktoberfest promotions material. Also absent from their website is any official list of beers; however, given that the only alcohol-related sponsors listed are Molson Canadian and Creemore, you can probably assume that "authentic" German beer will be in short supply.
The food: You can guarantee the standard Oktoberfest fare will be on hand--they boast that they'll go through over 50,000 pounds of sausage (how's that for a visual)--but there's also a number of "culinary" events such as the Stein and Dine wherein guests can enjoy a multi-course meal, prepared live, and featuring a Molson Coors beer paired with each course.
Best bet for: Line-ups, children, and frat boys.

WVRST's Oktoberfest
The party started on September 22, and goes until October 4
The entertainment: A German-style beer hall that serves local craft brews, this is really the beer lovers' Oktoberfest event. As part of their festivities, WVRST is hosting the Oktoberfest Craft Invitational. Seven brewers including Beau's, Church Key, Cheshire Valley, Saw Dust City, and Silversmith are competing head-to-head with seasonal and one-off offerings appropriate to the season. They're available in limited quantities and you can vote on your favourite until October 4.
Das Bier:In addition to the seven specialty beers, WVRST has 16 taps in total with a focus on local craft beers.
The food:20 different sausages, including a specialty Oktoberfest sausage
Best bet for: Socializing. Litre-sized offerings of craft beer and communal seating mean you're going to make friends over your wiener.