The best and worst of Taste of the Danforth 2012

Toronto tasted Danforth Avenue for the 19th year this past weekend. The event's insane popularity is a tribute to Greektown, but many would agree that the crowds have become a detriment to the experience. The cornucopia of restaurants on the street still serve the great food that popularized the event and made it worth attending, but the cons are worth considering before one commits to a day of opa-filled fun. 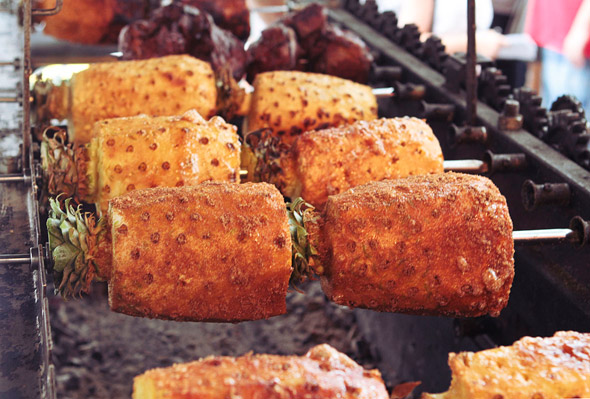 Roasted pineapple
Rodeo Brazilian Steakhouse may be focused on meat, but their main attraction at Taste of the Danforth was roasted pineapple. This Brazilian treat is designed to be a palate cleanser after dinner. Rodeo covers their pineapples in cinnamon and brown sugar and then roasts them on a fiery spit. Watching the juice drip off as the pineapple cooks is incredibly appetizing.

The Greek food everyone's looking for
While Taste of the Danforth definitely offers more culinary options than it once did, the Greek standards are still available. Astoria has all of your shish kebob needs. Messeni promises authentic gyros. Athena Bakery offers an incredible array of Greek pastries, displayed alongside Greek statues that are also for sale. 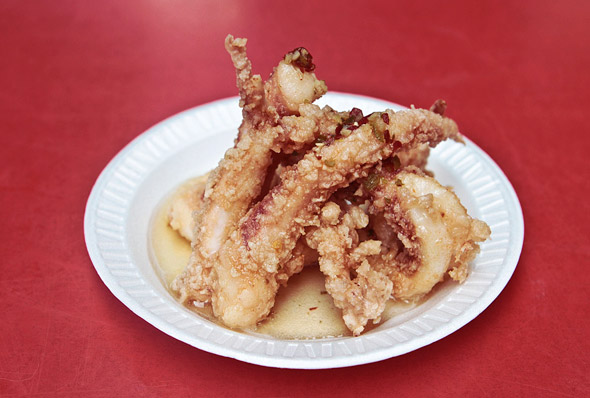 Zesty calamari
When Taste of the Silk Road opened 17 years ago, they were the only Chinese restaurant in a sea of gyros, souvlaki and baklava. Now, the Danforth has diversified and eaters have many options if they're craving soy sauce. Nevertheless, Taste of the Silk Road's calamari is still so popular; they can sell over 2000 lbs (907 kg) of the fried squid in one weekend. Their calamari is fried in corn starch, not batter, so it isn't too doughy. It comes with a vinaigrette of chili, garlic, coriander and ginger, which gives it a zesty edge.

Gourmet fish and chips
Off the Hook is technically located on Broadview, but, to the joy of seafood lovers, they brought their gourmet fish and fishs to a Taste of the Danforth booth. The fried fish itself is pretty standard, but their 10 signature sauces really spice it up. I had the halibut with a creamy garlic sauce and it left me wanting more than the bite-sized sample. 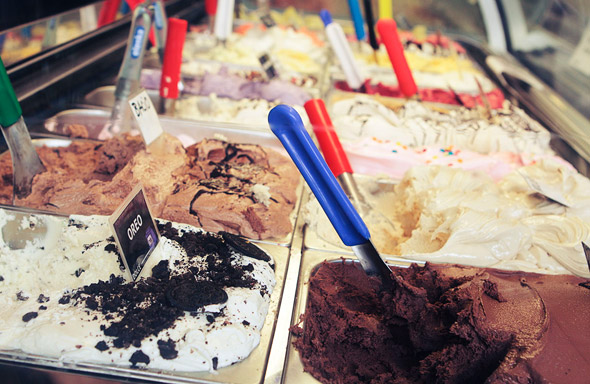 Lots o' gelatoDolce Gelato is exactly what you need on a hot summer day and they happen to be creative too. Their 41 flavours of gelato include standards like chocolate and vanilla as well as more typical ice cream flavours like bubble gum and strawberry cheesecake. The presentation is impeccable- I noticed a server going through the gelato with a spoon and taking out stray bits that had fallen into the wrong flavour.

The advertising assault
The Taste of the Danforth's popularity has attracted quite a few large companies who are definitely not Danforth-based. In fact, there were almost as many of these advertisement/brochure/free sample booths as actual restaurant stands. There was free Astro yogurt (at least it was Greek krema), an Expendables 2 booth and an inexplicable Bell consultant stand. While it's hard to turn down a good free sample, this event should be about Danforth cuisine and culture and not multinational corporations and movie premieres.

The screaming children
Crowds + a family-friendly event = screaming children. This is a simple equation that applies to many events, including Taste of the Danforth. The children's screaming intensifies as you approach the carnival section. People who want their ears to remain intact should stay far away. 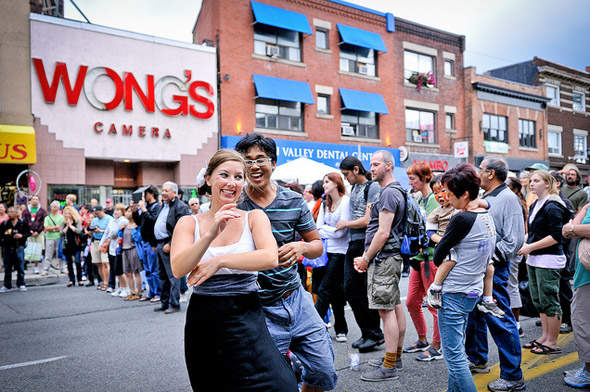 The threat of rain
This past weekend the weather did not cooperate with the event. There were periodic showers every day. While this of course is a danger with any outdoor event, it's particularly troublesome at Taste of the Danforth, because of the crowds. If it rains and you try and take cover, you can bet that 50 other people will be crowding into the same restaurant/store/overhang you do.

The crowds
Taste of the Danforth claims to attract 1 million people over the course of the weekend. This undoubtedly speaks to the popularity of the event, but it also means that attendees will not have room to walk at any point over the three days.