Food Truck Chasing as the next Olympic sport?

With the London Olympics now over, I've come to the humbling conclusion that I'll never be on the podium, unless I invent my own category. Fortunately, I think I've found it: the food truck chase. It's part scavenger hunt, requires endurance, and a stretchable stomach.

This weekend's Craft Beer and Food Truck Festival provided the perfect training grounds as they united a handful of trucks and local breweries at the Roundhouse. But the nature of food on wheels means unexpected things happen. Three of the five vendors faced mechanical issues, leaving just two trucks (Rome'n Chariot and Dobro Jesti) parked on the slightly soggy grass.

Despite a slimmed down food offering and non-stop drizzle, people were still in good spirits sampling Ontario's finest local brews. By mid-afternoon the puddles started to dry up, and the outdoor spaced filled in. After waiting a little longer, the suds started swimming in my stomach. Maybe I could relay between the two trucks? That's when I discovered a surprise contender, Fusia Dog, had come out of nowhere and set up a pop-up operation inside Steam Whistle's warehouse. 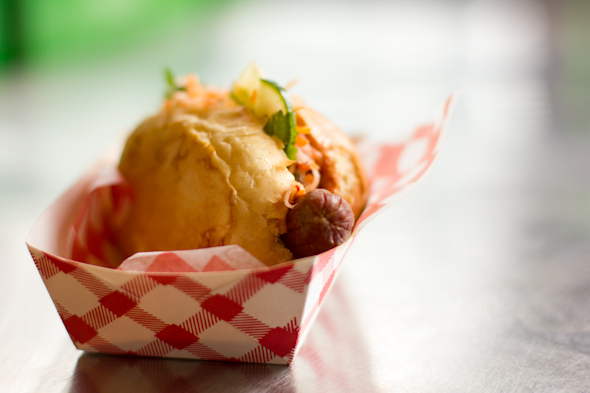 Fusia Dog
Okay, it's a bit of a technicality with this one. They don't have a truck and they serve hot dogs, but I tried to keep an open mind. Fusia Dog's freestanding operation is at 65 Duncan street, and having just opened their doors eight months ago, there aren't any immediate plans to put their menu on wheels. The market for street meat fare on Toronto's streets is saturated, but Fusia Dog is looking to breathe new life into a classic by paying homage to Toronto's multiculturalism. At first glance, these dogs have a Japadog look. But instead of miso and seaweed toppers, Fusia Dog offers toppings that are fitting of a UN meeting. Even better? They all play nice with each other.

I had to go with the most exotic offering. The kosher dog comes with wasabi-mayo, coriander, kimchee, carrot, daikon and cucumber slaw atop a Kaiser bun. Although not as plump as a kielbasa, or spicy Italian sausage, the Fusia Dog still has swagger. I would suggest a toasted bun to really add a bit of texture to the bread, but the novelty of all the different ingredients works. 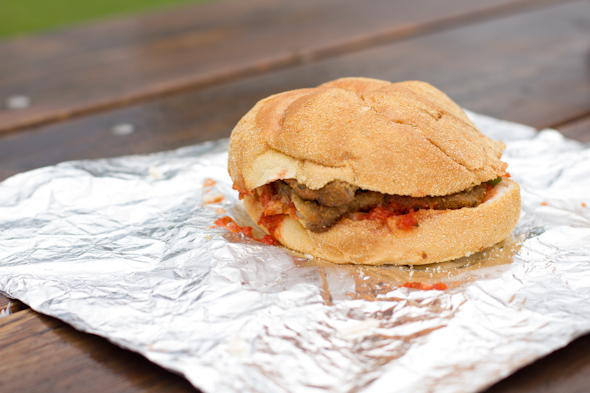 Rome'N Chariot
Back on the lawn, I was tempted by the appeal of the meatball sliders ($9), but ordered the veal on a bun instead ($8). After unwrapping my sandwich my heart sank a little; this isn't the prettiest of sandwiches. I took a bite anyway. What can I say? Looks are deceiving. Sandwiched between a buttery-soft Kaiser is southern Italian comfort food.

The AAA black Angus was topped with a hearty, well-seasoned marinara sauce, mozzarella cheese, fresh green peppers and onions. The veal was incredibly tender, and despite being a massive portion, I devoured it within a few minutes. And while the event was a meat-lovers feast, it was refreshing to find a vegetarian option: penne pasta topped with the same homemade marinara sauce. 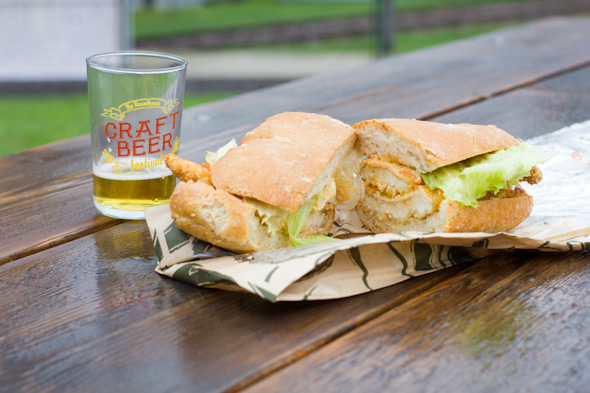 Dobro Jesti
The last competitor of the day. I can't think of more beer-appropriate food than schnitzel. Red-meated out for the day, I opted for the panko-crusted chicken schnitzel ($10) that comes on a nine-grain bun with a spicy sriracha mayo. In terms of value for dollars, this gigantic sandwich has it. The nine-grain ciabatta bun was a great choice for a dynamic and powerful mayo, but the tomato and lettuce topper keep this chicken sandwich from really taking off.

Bronze: Dobro Jesti.
A great effort and a huge portion for price, but the flavor combination just barely missed the mark.

Silver: Fusia Dog.
The unexpected underdog takes street meat to a new level. And paying tribute to the host city is always a good sign.

Gold: Rome'n Chariot
Don't judge a sandwich by its looks. This was a true unexpected performance with its huge portion, fresh-picked ingredients, and comfort food that hits the spot on any day.