Doughnuts are experiencing an undeniable surge of popularity, with Paulette's Donuts and Chicken having just opened, and Glory Hole Doughnuts plotting a storefront. Fans of the latter might be in the throes of withdrawal shakes as Ashley Jacot de Boinod is currently not accepting orders. Fortunately, there's a new player on the doughnut scene.

Rachelle, of Dough by Rachelle, is selling doughnuts out Beast's back alley every Thursday morning. Her maple bacon doughnuts have been a weekend brunch staple at the meat-focused restaurant which her and her husband own, and she's been previously spotted at Toronto Underground Market. At just $3 each, Rachelle's doughnuts are a more affordable option than Glory Hole, and although there's something a bid seedy about lining up in an alley and forking over cash (only) for fried dough, they come in clever flavours like Bacon Maple, Chocolate Hazelnut, Peach Fritters and Margarita. 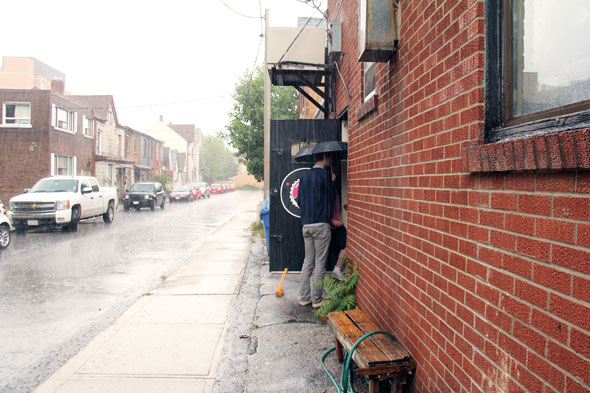 Service begins at 8 a.m. on the dot, and don't expect to saunter by in the afternoon and still get your fix--these doughnuts are definitely limited edition, and typically sell out by 10 a.m. Word to the wise, though: when I stopped by last week around 8:45 a.m., I was met with a heart-breaking chalkboard declaring that they were already sold out, and a closed door. "Last week was a bit nuts," Rachelle says, smiling.

Fast forward a week. I stopped by again this morning at 8:15 a.m., umbrella pounded by a downpour, and saw a couple huddling and shivering in the doorway ahead of me. Definitely a shady affair. 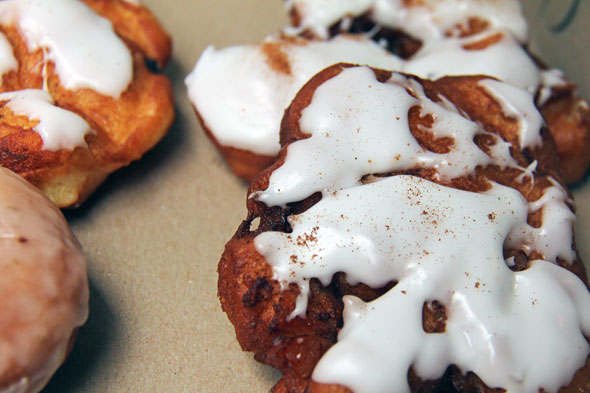 Under strict instructions from my boyfriend to steer clear of the maple bacon (while it's Dough's fame-making donut, we're both averse to the sweet and savoury combo), I instead opt for apple and peach fritters, and the highly intriguing margarita doughnut (a balanced blend of lime curd filling and tequila-infused frosting). "I'm focusing on seasonal fruit right now," Rachelle tells me.

She always makes at least 100 in 4-5 flavours, and tends to take the weather into account. Gazing beyond the narrow counter, I spot racks of fresh doughnuts, and I loiter despite the rain for the smell alone. When I bring it home, I'm delighted by the apple fritter. Light and airy dough, frosting that's not too cloyingly sweet, and the subtle tang of apple lingering as an aftertaste. My boyfriend's entirely unbiased verdict: "I'm convinced--they're delicious." 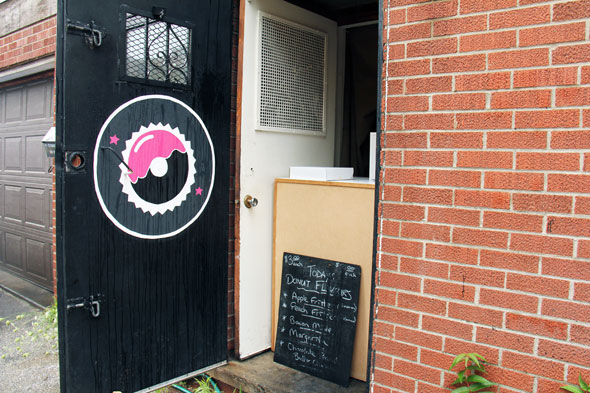 You can keep an eye on the goings-on through Dough's twitter feed, where Rachelle posts the next day's flavours on Wednesday evening, and updates on the dwindling stock. Rachelle says she'd like for the back-alley donuts to continue into the winter, and in my humble opinion, the snow-suited line-ups would only grow as carb cravings spiked.

Rachelle has been baking for over 12 years, and when asked why she's chosen to focus on doughnuts, she laughs. "I just love them," she answers.