Appletree Markets has more than your daily apple

Despite a severe thunderstorm watch and record-breaking heat, 25 vendors turned out in all their foodie glory to sell their wares at Appletree Markets on Tuesday. Appletree Markets is the brainchild of Daily Apple, a bakery turned all around health and wellness company based in north Toronto. The market sells apples and much more until mid October at June Rowlands Park at the corner of Mt.Pleasant and Davisville every Tuesday from 3 until 7pm.

The wide array of vendors provides enough variety to stock anyone's pantry and the fridge beside it. Here's a look at some of the vendors who grace the market each week. 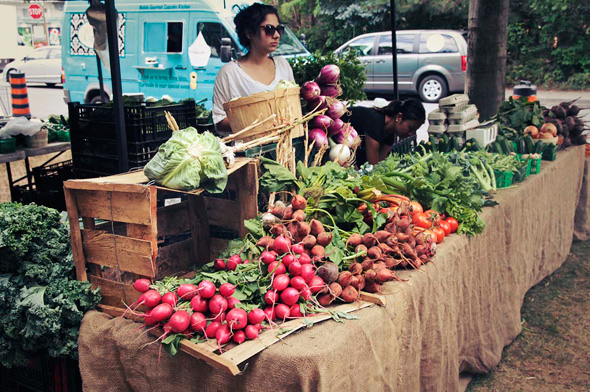 Highmark Farms
Highmark Farms is a family-run, jack-of-all-trades farm from Cookstown, Ontario. Putting it simply, they sell vegetables, meat, eggs and soap. The soap is made entirely from Highmark Farms' products. All livestock are grass-fed, with the exception of wild boar, who are kept in cages for safety reasons. They are organic, but not certified. 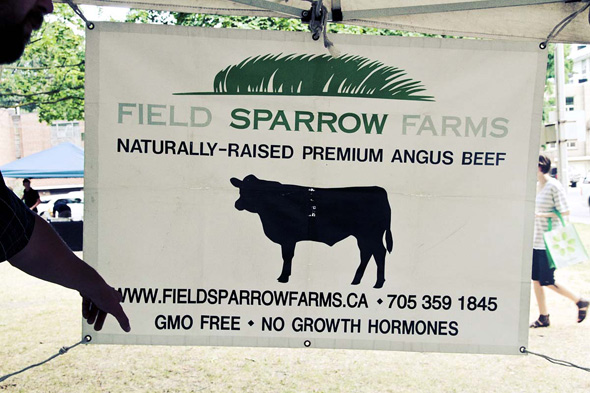 Field Sparrow Farms
Field Sparrow Farms has been around for less than a year, but they already offer several varieties of meat including beef, pork, lamb and chicken. All of their meat is GMO and growth hormone free. They are also beginning to grow their own animal feed on their Bobcaygeon farm. They have decided not to become organically certified, although owner Henry Bakker maintains that all meat is grass-fed and pesticide-free.

Hogtown Charcuterie
Hogtown Charcuterie uses the whole animal to make their artisanal meat products. These include French classics like pâtés and terrines alongside the eastern European staples of ham and sausages. They frequently buy from local Mennonite farms.

Canadian Pie Company
The Canadian Pie Company has used a great name to spearhead their line of fruit pies, quiche and meat pies. Baking in their storefront on Queen East, the company also espouses to use local ingredients whenever possible. The apple cinnamon pie comes highly recommended. Less standard flavours are also available including sirloin steak pie and Atlantic salmon and broccoli pie. 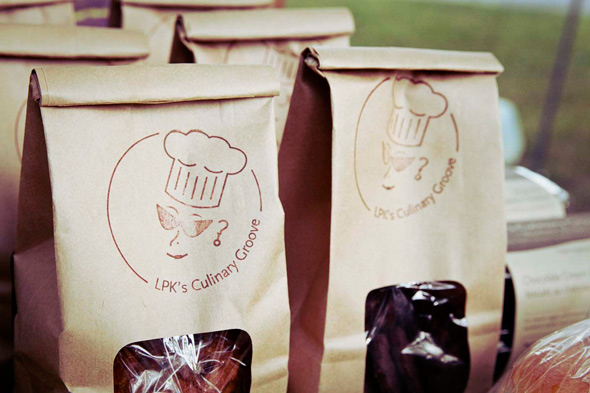 LPK's Culinary Groove
This gluten-free bakery was born from owner Lesia Kohut's love of baking. The name comes from Kohut's days as a DJ in Edmonton when she was known as "Little Punk Kid". LPK's Culinary Groove is organic, certified local sustainable, 100 per cent gluten-free and 95 per cent vegan. Baked goodies can also be found at their location on Queen East alongside cooking classes. Not bad for a business that started out of Kohut's basement four years ago. 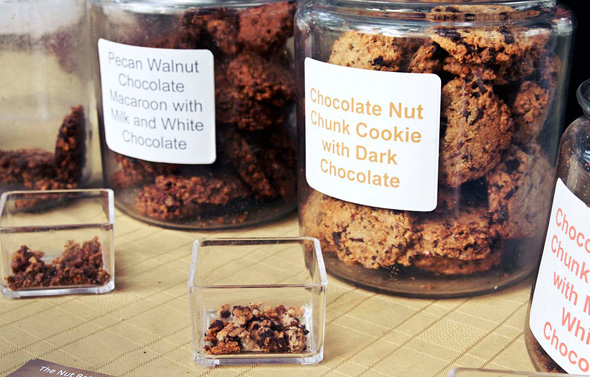 The Nut Bakery
The Nut Bakery fills a niche in Toronto's fill-to-the-bursting bakery scene- they provide cookies and granola bars that contain a full serving of nuts. The healthy treats are made from nuts, egg whites and sugar and come in a variety of flavours. The chocolate nut chunk cookie is surprisingly delicious and not bad competition for North America's traditional chocolate chip.

Wendy's Whipped Butter
When Wendy Kirshner went to culinary school and learned how to make whipped butter, she asked herself why she had never seen this product before. Now she sells the creamy spread and tries to introduce it to anyone she can. The obvious favourite is her bacon butter, but the subtler lemon and cilantro flavour is equally delicious. 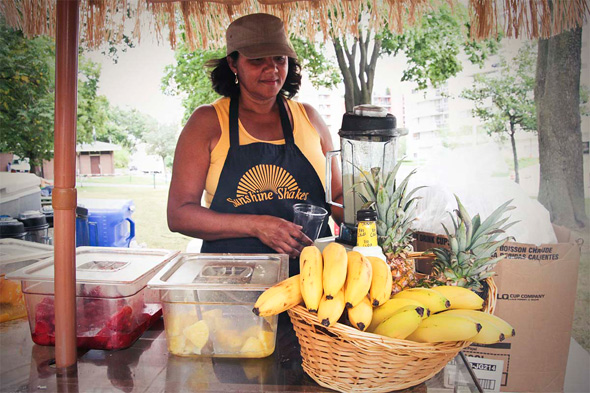 Sunshine Shakes
Sunshine Shakes has been hydrating Toronto for 17 years and the experience shows. Aside from a pina colada flavour made with Mott's juice, all of the shakes are made on site from fresh fruit, water and ice. Better known by their Queen's Quay location, Sunshine Shakes' tiki-style stand brings a beachside flavour to AppleTree Markets. 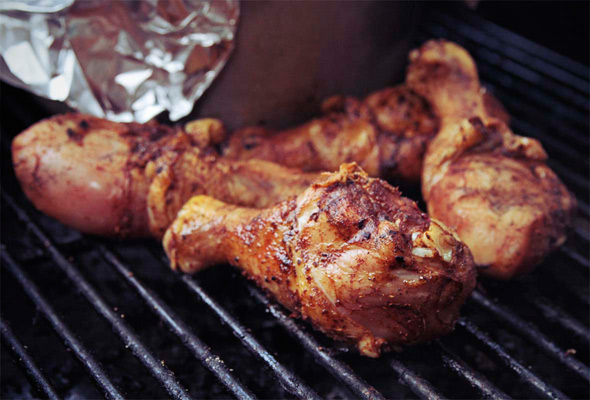 Loïc Gourmet
Loïc brings the barbecue element to the market, selling sandwiches, soups, salads and fruit juice popsicles. All of their fish is Oceanwise certified and they try to purchase locally whenever possible. Loïc's specialty is their steak sandwich, which consist of a marinated tri-tip on a Kaiser bun with caramelized onions, tomatoes and chipotle mayonnaise. This can also be purchased at their storefront on Queen East.

Pic Nic at Home
After piloting the Pic Nic Wine Bar charcuterie, owner Seika Gray decided she wanted to bake her own bread to spread her charcuterie on, and so Pic Nic at Home was born. The Pic Nic at Home bakery will soon be opening and in the meanwhile their spreads can be purchased at AppleTree Markets. These spreads are far from conventional, including bacon jam and an ominously named "fire and ice" jelly. This jelly, made from red peppers, chili flakes and icewine is both original and enjoyable.

Curbside Bliss Cupcakes
Curbside Bliss Cupcakes, the only food truck at AppleTree Markets, does not go unnoticed. Beyond the bright blue wagon, Curbside Bliss has creative ideas and the bubbliest vendor in Davisville. After leaving the corporate world and becoming a mother, Cynthia Pacheco decided to follow her passion and create what she believes to be the first cupcake food truck in Canada. Alongside cupcakes, Curbside Bliss also features "mancakes" and "bliss pops". Mancakes are savoury cupcakes like a beer cupcake with candied bacon on top. Bliss pops are push pops filled with layered cake. 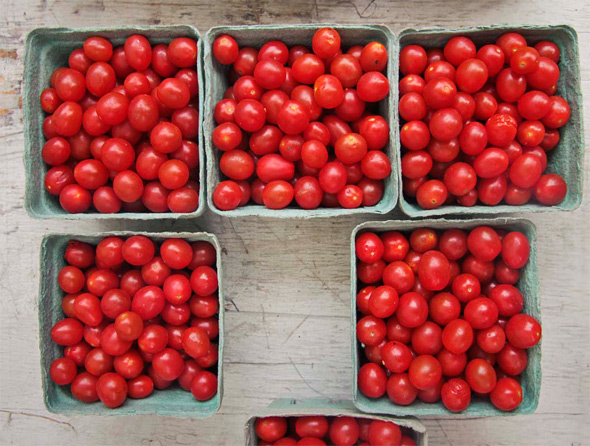 PV's Fresh Fruits and Veggies
PV's Fresh Fruits and Veggies sells fruit from Warner's Farm in Beamsville and vegetables from neighbouring farms. Despite losing 20 per cent of their crop to spring frost this year, PV's still had quite a few juicy peaches for sale. PV's is a conventional farm, citing this year's weather difficulties as an example of the financial troubles even basic farming brings, let alone organic farming.