Where to watch the 2012 Euro in Toronto

Where to watch the 2012 Euro Championship in Toronto will depend on your allegiances, but we're spoiled for options when it comes to football-crazed restaurants and pubs in this city. The tournament begins today (June 8th), and you can bet that you'll soon be hearing a ton of soccer-talk and honking car horns. The parades will come later, but you know that they'll come. With most of the games happening during the daytime, you're also likely to see your co-workers taking extended and strategic lunches and calling in "sick."

Along with the various establishments to take in the festivities, once the quarter finals arrive, Carlsberg will be setting up fan zones around the city, where you can check out the games (and presumably drink some beer) under the sun.

Here are some suggestions for where to watch the 2012 Euro in Toronto.

Duke of Gloucester
This old English style pub is a great place to grab breakfast and a beer for some of the early games. It will also the main hub for English fans. For English or Irish matches you'll need to get there early, but there's plenty of space and a nice patio with televisions if the weather is nice.

Duke of York
Sure to be filled with English fans during their games, the Duke will also be a packed house for most of the tournament. This old Empire-style pub has so-so pub fare, but a great patio to enjoy the games outside, which make the whole experience that much better.

Hemingway's
The somewhat recently adopted home of Australian football fans, once upon a time this Yorkville bar was one of the main gathering spots for Dutch soccer fans — and you can expect to be again for this year's Euro. Expect the second floor patio to be packed during big games.

Queen and Beaver
The Queen and Beaver always seems busy, but the crowd factor will be dialed up even more when the Three Lions are in action. Featuring some of the more authentic English fare around, it'd be tough to think of a better place to settle into a long day of watching Euro Football. Note well: the fish and chips are fantastic.

Pogue Mahones
It's best to get to the Irish spots on this list during the first part of the tournament when the Irish are still in a good mood, if you catch my drift. Although there aren't a lot of televisions, there's a nice-sized patio and decent food.

Paupers Pub
A great Annex spot with multiple levels to enjoy your soccer viewing experience. The crowd here is usually quite diverse, so feel free to bring along a flag of any colour to the pub. All matches will be shown here and the bar sports two patio areas (one on the ground floor and another on the roof) that are sure to be very busy on game days.

Hrvati Bar
This Croatian bar is likely to be hopping during Euro 2012 especially if the native team can repeat some of its success from the 1998 World Cup. If not, fans can always drown themselves in Croatian beer. Yes! 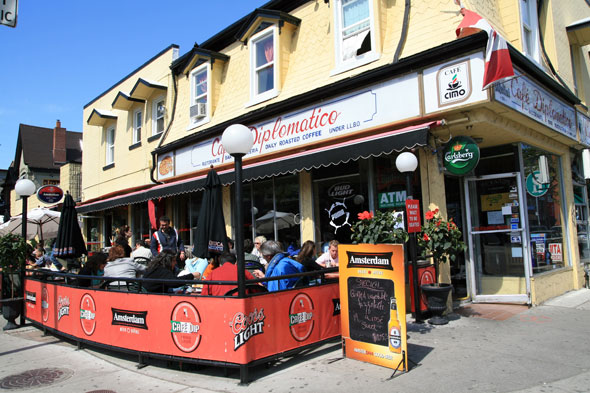 CafÃ© Diplomatico
This is like ground zero for Italian fans. With a giant patio and many large screens, it'll be tough to get a seat even in the middle of the day. But, hey, you can always watch from the street! If you're not into the Italian team, head over to watch another country play when the patio's easier to access.

Coco Lezzone
Another Little Italy go-to, expect this place to be bustling throughout the tournament with people watching games on its large plasma screen televisions and the oversized projector screen. A good option for those who like to pair their football with something other than beer.

Carlo's Snack Bar
You can count on this place being packed with Portuguese soccer fans during the tournament. Not being particularly big, watch for the room to erupt when the home country scores.

The Mod Club
The Mod Club actually makes for a good place to watch soccer thanks to its spaciousness, the fact that all games are broadcast, and the big screens they haul in for the Euro.

Rio 40
Normally home to Brazil fans during the World Cup, but you can also expect a large Portuguese contingent for the Euro. Although it's a small place, the "soccer centric" atmosphere that unfolds during major tournaments can't be beat.

Vivid Pizzeria
Another key gathering area for Italian soccer fans, this place will be packed with passionate people in the coming days. Decent beer and wine lists give you lots of drink options, and the pizzas are great for sharing with friends while you watch the matches.

Euro Sports Bar and CafÃ©
This unassuming bar is aptly named, and the home of Portuguese fans during international soccer tournaments. It isn't anything to write home about in terms of its menu or drink selection, but it does host some of the most passionate fans in the city.

Bellevue
Though Kensington Market isn't well known for it's sports bars, there are a few worth checking out during the Euro. The Bellevue will be televising the tournament on large screens inside the bistro as well as outside on their spacious patio. If the weather cooperates, this'll be the best spot to catch a game in the market.

School
Always a good spot to take in the international tournaments, this cafÃ©/pub will be showing all the games throughout the Euro, so you don't have to be a Dutch fan (though it likely helps) to enjoy the Eggs Benny on a Cheddar Chive Biscuit while watching a match.

The Brazen Head
A regular haunt for TFC fans before, during and after matches at BMO Field, watch for a large Danish contingent during this year's Euro. But if you're not into Denmark, there is no need to avoid the Brazenhead. This place will be chock-full of football fans throughout the tournament.

The Dizzy
Normally a hot spot on weekend mornings for English Premier league games, you can expect Polish fans to join the English types for the Euro. Expect this to be a busy spot with lots of knowledgeable fans.

Zagloba
This should be another gather point of for Polish fans. And regardless of whether Poland is able to win a game or two, there will still be lots of Polish beer to go around — always a good thing. 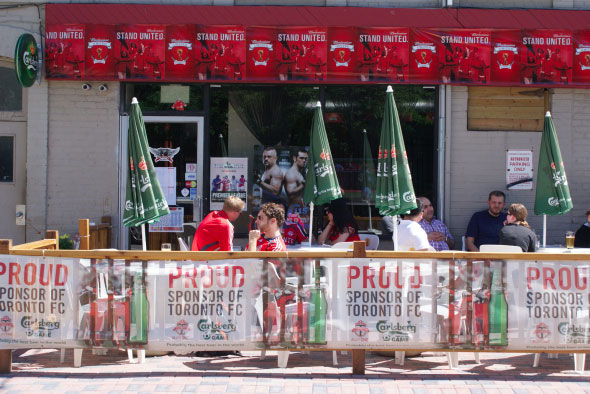 Football Factory
If you're looking for a good pub without a biased set of fans, check out the Football Factory. This place is always packed during big games and the crowd is usually quite diverse, though some may argue there's a bit of an English bent. It's wonderful to watch a match with a well-informed crowd. Folks here understand offsides, the booking of players and when intelligent strategy is being used. So brush up on your soccer knowledge if you're one of the more uninformed.

Prague Food Emporium
This is likely to be home to many Czech Republic fans during the tourney. Solid food and great Czech beer is worth the visit. Pilsner Urkelll is one of my personal faves.

The Wheat Sheaf
Arguably Toronto oldest bar, the Wheat Sheaf will be a destination for fans of all countries. Ample seating and a solid beer selection make this a good spot if you're in the area.

Le Saint Tropez
Probably one of the only places in the city you'll find fans cheering for "Les Bleus." The atmosphere here will be great, particularly if you're French!

Real Sports Bar
A great bar for pretty much any sporting event you want to attend. There are televisions everywhere and the big screens behind the bar bring the experience of watching the game remotely to a whole new level.

Betty's
This has been a big gathering spot for Dutch fans for the last few major tournaments and was the scene of pure heartbreak during the Dutch loss in the World Cup final. Expect this joint to be bleeding Orange once again during the Euro tournament.

The Fox and the Fiddle
This humble pub becomes the main centre of Greek football fandom every international tournament. Expect big crowds and lots of Greek chants as long as they're in the tournament. 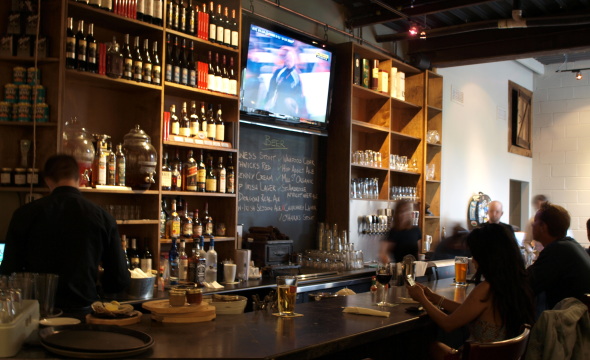 Ceili Cottage
Not your typical place to watch a game, but they do have a number of HD televisions to placate the Irish crowd. And Irish it will be, until they're out of the tourney.

The Musket
Chow down on schnitzel, pork chops and steak while you watch Germany in action. While other nations are more than welcome to fly their flags here during the tournament, the Deutsch are set to take over during the Euro.

The Blue Danube
As the name suggests, this is another hot spot for German supporters. This restaurant is as authentic as it gets, so your best option is the Schnitzel.

The Feathers
This is a great English pub with to die for fish and chips. There are plenty of good beers on tap, including MacAuslan Cream Ale (one of my all time faves). There is also an extensive Whisky list if you feel like getting silly during all the festivities.

Main Event
As the main hangout of Manchester United fans, you're bound to see a very pro-English crowd here. The bar sports over 28 screens so you won't miss any of the action as you enjoy your pub grub and beers.

Scallywags
Usually a haunt for fans of Premier league teams like Liverpool, Tottenham and Chelsea, this Yonge and St. Clair pub will attract its fair share of English fans, but it'll also be a hub for games throughout the tournament. There are three floors and plenty of TVs, and the energy for soccer is like nothing else.

Wegz Stadium Bar
For all those Italian fans outside the city who won't be able to make it downtown for any of the Italian matches, this bar is a great option. It's not a place to go if you're not an Italian fan, but if you are and Italy is winning, you're in for a truly great experience.