There are so many beer festivals that take place in and around Toronto every summer, that trying to keep track of them all can become a major source of anxiety to beer drinkers. Let's face it: having fun can be stressful. You worry that you'll miss your favourite brewer stopping by your neighbourhood, you stress out when you hear about a festival too late to coordinate your schedule or, worst of all, you're publicly humiliated by your much cooler friends who tell you what a great time they had at a beerfest you had no idea had already happened.

It's enough to make you need a drink.

Well, relax. I've done all the work for you and compiled a list of the various beer festivals happening in the city this summer so that all you need to do is show up, eat some food from a vendor and drink some sweet, sweet beer. You're welcome.

Barrie Beer Fest
What: The first annual Barrie Beer Fest will feature beer from a handful of local brewers, food from Sticky Fingers Bar and Grill, a tutorial about home draught installation, and music from 3MDM who are, apparently, "the best pub band in Canada!!!" (I guess that warrants three exclamation marks).
When: June 15 - 16
Where: The Barrie Curling Club, 175 Essa Road
How much: $18 if you buy online and $20 at the door. Group rates also available

Ontario Craft Beer Week
What: The third annual tribute to Ontario's independent brewers, featuring the Ontario Craft Brewers' 29 members and comprising hundreds of events all across Ontario, including various food and beer collaborations, tap takeovers, and pub crawls. The week prior to the festival, we'll feature a comprehensive guide to the events occuring in Toronto during the week.
When: June 17 - 23
Where: All across Ontario
How much: The cost of events varies.

Session 99 Craft Beer Festival
What: Sort of the unofficial close of Ontario Craft Beer Week, Session 99 features food, 100 different beers, live music from a 12-piece soul band, an award-winning illusionist and two stand-up comics.
When: June 23
Where: 99 Sudbury Street
How Much: The day is broken into two "sessions," 1pm-4pm and 6pm-9pm. A ticket for each session will cost you $45.20 in advance or $50 at the door.

The Summer Festival of Craft Breweries
What: C'est What's annual summer beer festival features 40 Canadian craft beers to sample.
When: June 22 and June 23. 3:00 pm each day.
Where: C'est What, 67 Front Street East
How much: Free 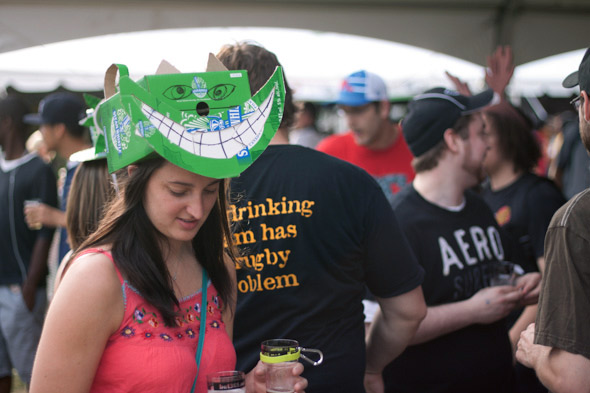 Toronto Festival of Beer
What: Beer from over 60 different worldwide brewers featuring over 200 different brands, in addition to cider and "ready-to-drink" beverages (i.e. coolers and pre-made cocktails). The event also features a "World of Beer Pavillion" featuring food and beer from one region. This year features Quebec. Unlike other festivals where you'll drink beer from plastic cups, The Toronto Festival of Beer proudly boasts that everyone attending receives a commemorative glass stein.
When: July 27 - 29
Where: Bandshell Park at The Exhibition Centre
How much: $38.50 for each day. Includes five drink tickets, a glass stein, and a guide to the events

Queer Beer Festival
What: The Queer Beer Festival isn't so much it's own festival as it is an additional, unofficial kick-off to The Toronto Festival of Beer. From the same organizers, this festival likewise boasts 200+ brands of beer but is also billed as a "celebration of diversity in tribute with the gay, lesbian and trans communities."
When: July 26
Where: Bandshell Park, Exhibition Place
Cost: $38.50

Muskoka Beer Festival
What: If you're headed to cottage country this summer, why not check out this day of craft beer tastings, local food, and live entertainment?
When: August 25 (It seems like their website hasn't been updated in a few years, but I confirmed with the organizer that the event is indeed happening and the info for directions and parking online is still accurate).
Where: Annie Williams Park, Bracebridge, Ontario
How much: Admission is $20 and drink tickets will run you $1, but that includes a commemorative taster glass.

Toronto Beer Week
What: Billing itself as "Toronto's premiere craft beer celebration," Beer Week is the brainchild of a handful of some of the city's most knowledgeable beer enthusiasts and will comprise of a beer-focused dinner, pub crawls, tap takeovers, and samplings of one-offs and beer rarities. This event is dedicated to the advancement of the craft beer movement and proudly boasts "no bland mega beer permitted!"
When: September 14 - 22
Where: Various venues across the city.
How much: Costs vary per event