It'd be difficult to imagine a better patio for drinking wine than the one that sits on the northwest corner of Dundas and Gladstone. Home to Midfield Wine Bar, the recently added outdoor space extends the laid back, pretension-free vibe that co-owners Giuseppe Anile and Christopher Sealy have cultivated indoors since the bar opened back in February. A certain masculine sensibility is displayed in the minimalist patio furniture and greenery that surrounds the space, but these understated qualities speak to the degree to which the wine is always in the leading role here.

The Scene
On weeknights the patio is picks up steam just after nightfall with 20 and 30 something couples and small groups occupying the tables. At its peak, the conversation can get boisterous, but never to the point that you can't carry on with your tablemate(s) at regular volume levels. In other words, amongst other things this is an ideal date spot. The service is personable but not intrusive, and occasional perks like sample tastes of featured wines go a long way towards making patio-goers feel just a tad bit special, which is an art that an unfortunately large number of our city's bartenders have never learned.

On weekends, you're bound to see a more diverse and less local crowd roll through, but there's something about Midfield that makes it virtually douchebag-proof — no small accomplishment given that we're talking about a wine bar here. The best nights in terms of action and people watching are Thursday and Friday.

The Eats
Although Midfield doesn't have a full service dinner menu as of yet, the food currently on offer happens to work well in a patio capacity. Think sustainably farmed Cascumpec Bay oysters (which come in at $2 each during happy hour) and a variety of charcuterie options that are artfully plated with meats and cheeses sourced both locally and from Italy and France.

An exciting new development is the introduction of Sunday grill nights, which feature menus from guest chefs. These occasions dial up the sensory satisfaction factor by a few notches, as Sealy — the resident sommelier — is able to show off his pairing prowess with the more substantial food on offer. Check out the bar's Facebook page for info on upcoming events. 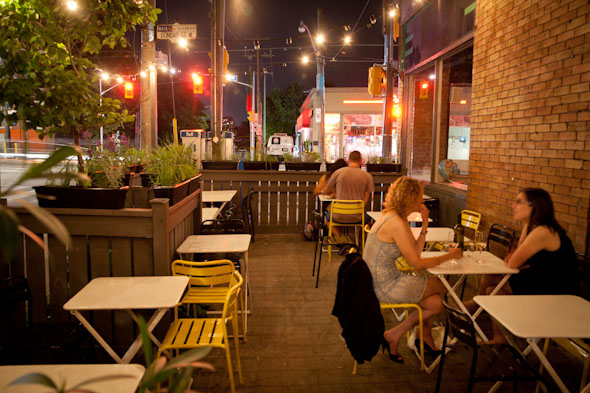 The Drinks
If you like wine but aren't a wine snob, this is your place. While I wouldn't characterize the choices here as esoteric, there's an obvious focus on interesting wines rather than just fruit-bombs and familiar varietals. Here you're just as likely to see Schioppettino as you are Sangiovese, and offerings from better-known regions tend to feature unique characteristics that could keep oenophiles chatting for days.

Particularly noteworthy in terms of patio-friendly wines are the whites on offer, which are arguably even more interesting than the reds. Think Assyrtiko (a lesser-known Greek varietal) and the wonderful but under-appreciated whites from the south of France and you're on the right track. Naturally, there's also a rosÃ© or two to choose from as well as something with bubbles. Prices typically range from $8-$16 per glass with $12 serving as something of a sweet spot.

So the wine is obviously covered, but depending on what kind of an evening it is, sometimes a cocktail or beer is called for. Toward that end, Midfield has a short cocktail list highlighted by a solid Negroni and the less common Paper Plane, which brings together bourbon, Aperol, Amaro, and lemon juice. On the beer side of things, Peroni sightings are quite common on the patio.

Key Features
This isn't really the type of patio that's defined by a set of features. That said, the corner location allows vistors to decide on whether they're up for watching the action on Dundas West or to enjoy the quieter side adjacent to Gladstone Avenue. When the patio barbecue gets fired up on upcoming Sundays, you can count on that being a draw as well.

Other Details
There are no reservations on the patio, but aside from peak hours on Fridays and Saturdays, you're likely to get a seat — I doubt there'd be much of a wait. The lighting also deserves a mention as it's dim enough that everyone looks their best, but not so much that you're at risk of spilling your wine (hint: it's actually a bit darker than the photos indicate). Again, that's a plus if you're bringing someone out for what you hope will be pre-coital drinks. 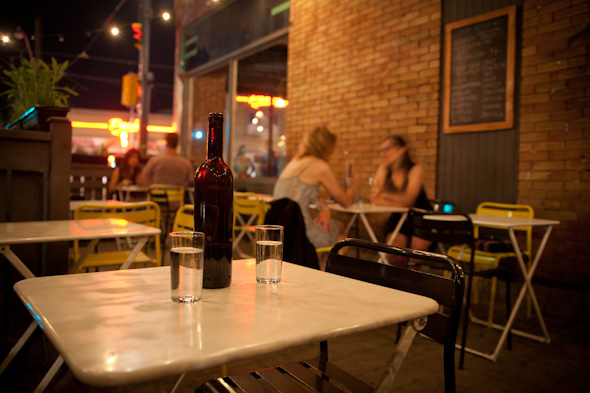