Filipino cuisine gets its turn to shine in Toronto

Since my family came to Toronto from Manila in 1989, Filipino cuisine has always been a staple, whether homemade or restaurant fare. Diniguan (pork blood stew), kare kare (beef and oxtail stew in peanut sauce) and ube (purple yam) ice cream are just some of our favourites.

But strangely enough, in a city with 200,000 Filipinos, the cuisine - a mix of Spanish, Chinese, Japanese, American and Asian influences - has yet to penetrate the mainstream in the same way that other Asian cuisines have. This may change soon as a new generation of restaurateurs cook up awareness.

New kid on the block Lamesa Filipino Kitchen opened in May at the former space occupied by Rosebud on Queen and Bathurst. It serves a unique twist on Filipino cuisine and the efforts are helping bring awareness of the cuisine and culture to the broader mass.

Meaning "the table" in Spanish and Tagalog, Lamesa is the vision of Lester Sabilano and Rudy Boquila, who have worked together in the food scene for years. Sabilano, 35, born and raised in Toronto, says the restaurant has been a long time coming. "My family has been in the Filipino food making business since 1987 and I worked with them for most of my formative years." He studied business at University of Toronto and culinary arts at George Brown.

It was during a recent six-year stint at Oliver and Bonacini Restaurants that Sabilano became familiar with Toronto's restaurant industry. He and Boquila identified the need for a downtown Filipino restaurant. "We wanted to create a place where people could enjoy Filipino food in a comfortable relaxed environment. We wanted old world meets new world, like Makati meets Intramuros," he says, referring to one of Manila's urban metropolis and its oldest district respectively.

I took my friends to Lamesa on a recent Friday evening. The cozy venue was packed. As we enjoyed cocktails infused with the juice of the calamansi citrus, I took in the Spanish Colonial theme; the white walls, ornate ceiling and fans, light fixtures, and a shelf stocked with mason jars of pickled chayote, banana ketchup and other ingredients. The relaxed elegance felt positioned at the young and urban and felt far different from the Mom and Pop setups I often associate with Filipino restaurants.

One key difference between Lamesa and other Filipino restaurants is the $35 five-course tasting menu - which juxtaposes Filipino flavours with non-traditional ones.

Take, for instance, the duck pancit, which mixes mung bean noodles (pancit) with duck confit. Familiar yet fresh. Then there's the jackfruit crĂ¨me brulee, a tropical interpretation of the French dessert that had me scraping the bowl for more. For nostalgia, I had the green mango salad, served with a caramelized take on bagoong (fermented shrimp paste). The salty and sour flavours nicely contrast.

Sabilano says the crispy pork belly adobo is a customer favourite. Adobo refers to a cooking process where the meat is marinated in a mixture of soy sauce and vinegar, browned in oil and simmered in the marinade. "Ours is an interesting take on adobo. It's not often done crispy." Our party loved it.

Lamesa staff also participate in tastings so they can serve as ambassadors for Filipino culture. Not all staff are Filipino, a conscious decision to help the cuisine feel mainstream. During our visit, my friends learned, for instance, that ginataan refers to foods cooked with coconut milk.

In its two months since opening, Sabilano says their main clientele has been Filipinos, adding, "But surprisingly, there have also been a large percentage of non-Filipino diners that have come out of curiosity and wanting to try Filipino food. That's been great." 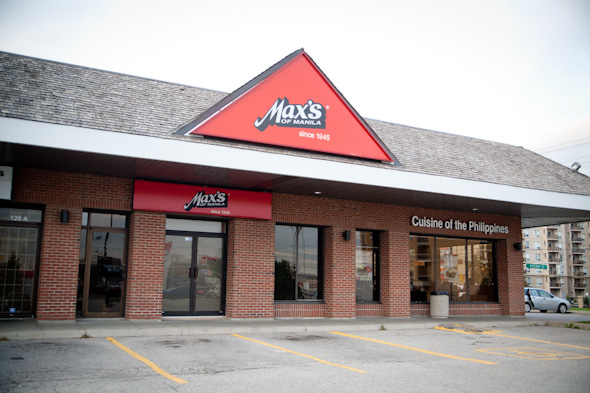 Elsewhere across town at the Toronto-Vaughan border of Steeles and Dufferin, Clyde Pacis is also helping usher Filipino cuisine into the mainstream. In his case, he literally brought over a popular Filipino franchise - Max's Fried Chicken - when he opened its first Canadian location in January 2011, creating huge buzz within the Filipino community.

Billed as "the house that fried chicken built," Max's has over 150 locations in the Philippines, plus 11 international locations, including seven in the US and two in the UAE. A second Canadian location recently opened in Vancouver. In Toronto, it's branded as Max's of Manila: Cuisine of the Philippines.

Like other Filipino-born Canadians, franchise owner Pacis has fond memories of the Philippines. "I missed the food a lot. Growing up here, I thought a lot about pursuing a business from the Philippines." After graduating from business at the University of Toronto over three years ago, he set his sights on Jollibee - the only fast food franchise in the world to outperform McDonald's at the local level (McDonald's offers spaghetti and fried chicken on their Philippines menu to compete). Pacis chose Max's instead, because it catered to a broader age demographic and had a family dining atmosphere.

He thought of settling in Scarborough, where there is a large Filipino community, but opened Max's in Vaughan instead, which has been a great move, allowing him to reach a broad audience. In its first year, Pacis says customers were about 90% Filipino, many undoubtedly drawn by nostalgia. Today, he estimates they're about 70%. "We're attracting other communities. Our area is also home to many Italians, Persians and Koreans."

Pacis attributes the unique - and relatively undiscovered - flavours of Filipino cuisine to its rising mainstream popularity. For instance, the sinigang - a soup that draws its signature sour flavour from tamarind - is popular with his Korean customers, because it offers a different variation of sour.

My spouse and I checked out Max's on a Thursday evening in June. As reputed, the place is packed; when it first opened, wait times of up to two hours were not unheard of. We ordered diniguan, lumpia (which many Filipinos will tell you is the "original spring roll") and palabok - a noodle dish known for its signature sweet and bright orange sauce. All came in big and hearty portions and cooked in the traditional way that I typically enjoy with a mountain of rice that soak up the saucy goodness.

And of course, there's Max`s famous signature fried chicken. We had the half chicken. Our verdict? Yummy! - or as they say in Tagalog, "Sarap!" It was cooked perfectly with juicy meat, lightly crisped skin, and not over-spiced.

With Max's success, Pacis is looking to grow his audience. A Filipino restaurant and lounge fusion is in the works with a target opening of 2013 in downtown Toronto.

The Lamesa team, who are friends with Pacis, also have long-term ambitions. "We want to be one of the best in North America as far as Filipino food goes," says Sabilano. He foresees new venues in Mississauga, Winnipeg and Vancouver, cities with large Filipino communities.

As someone who enjoys Filipino cuisine, it was nice to enjoy two different dining experiences - uptown/downtown, tasting-size/big portions, elegant/family dining. I feel hopeful and excited - and a tad of pride - that Filipino cuisine could potentially receive wider mass exposure.

Restaurateurs like Sabilano are also excited: "I don't think Filipino food has ever had its time in Toronto. We want it to be part of the discussion when people are trying to decide what they want to eat."