Gourmet glitz and good will join forces at Toronto Taste

Toronto Taste, the 22nd annual outdoor food event, was an elegant affair with gastronomic delights, ornate dĂŠcor, decadent guests, top chefs including a handful of Food Network Canada stars and a live auction that drew some impressive bids. On Sunday evening, 1,450 guests flocked to the row of big, elegant white tents stretched down the strip of Avenue Road just south of Bloor, flanked by the ROM to the west and the Gardiner museum to the east. With stylishly dressed guests milling about and even strolling up the grand staircase into the ROM, it felt like a scene out of Gossip Girl. 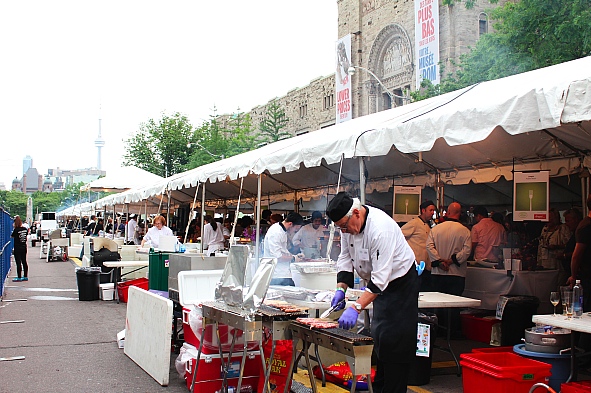 But Toronto Taste is about more than Toronto glitterati and celebrity chefs, it's a fundraiser for Second Harvest, a charity that feeds Toronto's hungry by collecting donated food and excess food (that would otherwise go to waste) and distributing it to community agencies across town. Entry to the event cost $250 but each ticket provides 250 meals to hungry people in the city. 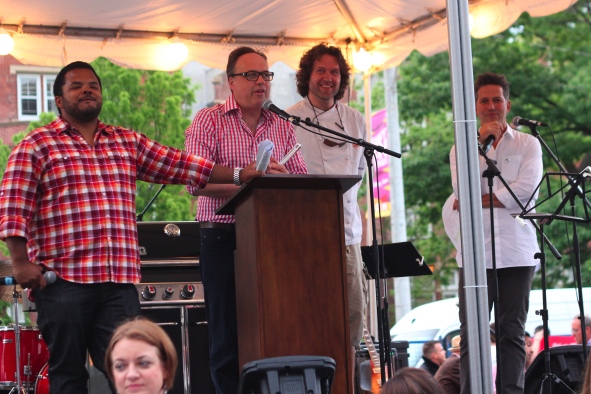 Many guests reached deep into their pockets for the evening's live auction, raising a total of $51,600 on prizes that included dining with Food Network stars like Michael Smith, Lynn Crawford, Mark McEwan and Roger Mooking, who was also the host of the night along with Bob Blumer. 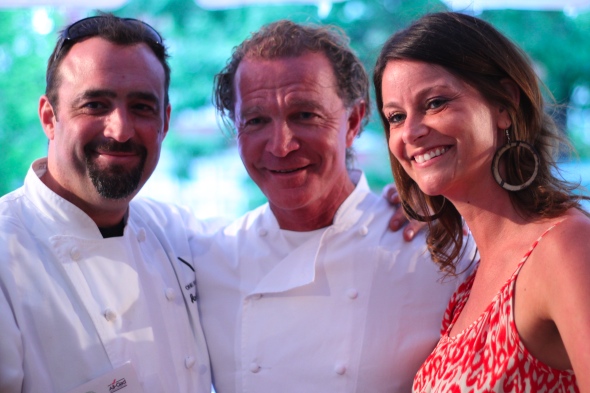 For guests not quite willing or able to shell out thousands on the auction, there were more than enough food and beverage booths offering great samplings. 60 Toronto restaurants came out for the event, including Woodlot, Sotto Sotto and Buca. 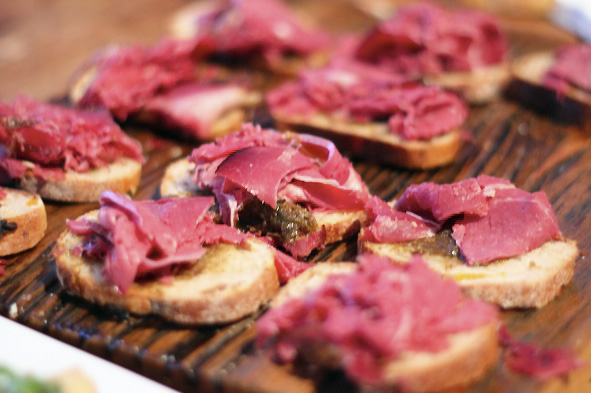 As far as food highlights go, Petite Thuet's black bear ham, as in meat from the leg of a black bear was a surprising hit. "The bear was shot in a field of berries, which gives the meat that sweet flavour," said the man serving me. "Bears that live near rivers and live off fish often have a more gamey flavour." The meat was tender, sweet, and a beautiful deep pink colour, almost magenta. 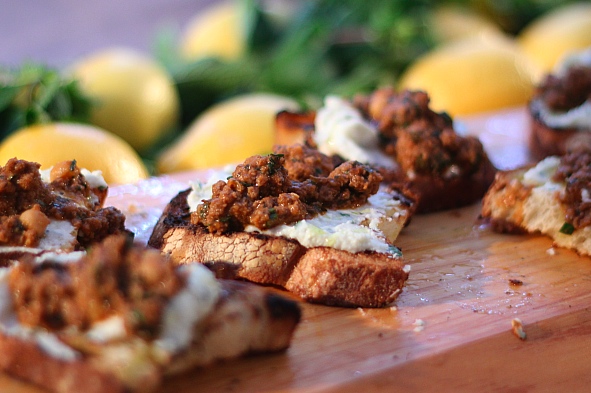 Other standout dishes included the arctic char with quinoa, wildrice, crispy chickpeas and edamame puree from Epic at Fairmont Royal York Hotel, the lobster po-boy sandwiches from E11even (200 live lobsters were prepared ship in for the event), and Mark McEwan's Bolognese made from lamb, chickpea and fennel seed on ricotto with mint and citrus, piled on toasted crostini. 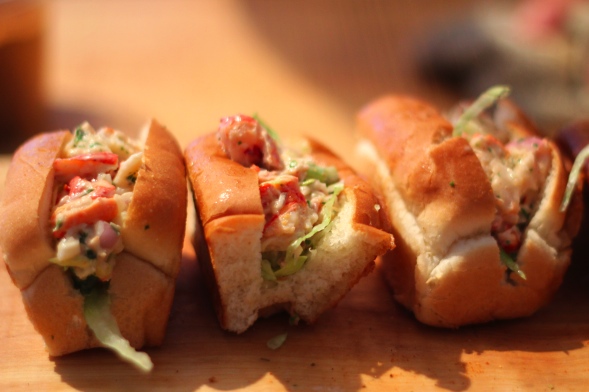 As the evening wore on, a jazz band played lively, cheesy covers of oldies like Jumpin & Jivin, mildly stirring the rather still and sophisticated crowd. As the food booths started to close down, young, bearded cooking staff enjoyed beers and cigarettes. It wasn't hard to tell the trendy food staff from the posh guests, but differences aside, they worked together to feed a lot of hungry people in this city. 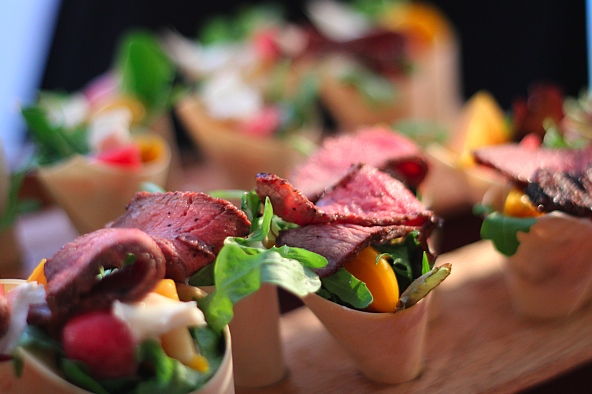 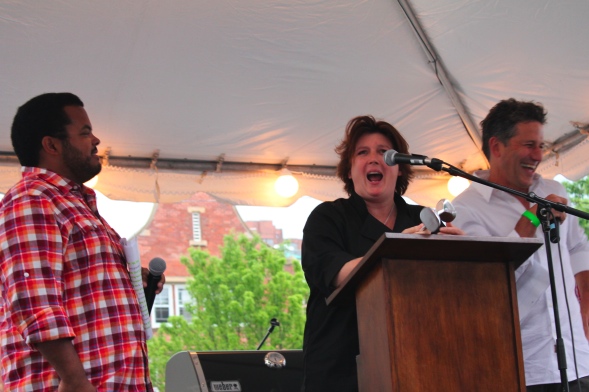 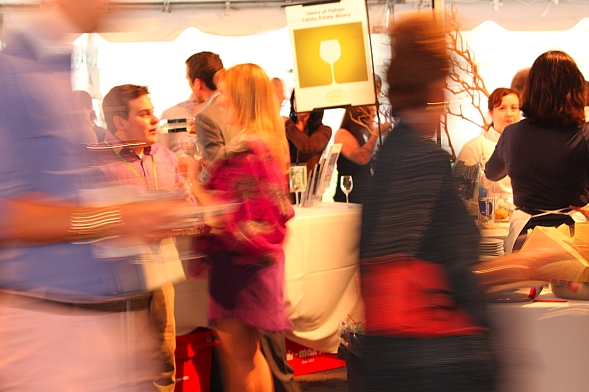 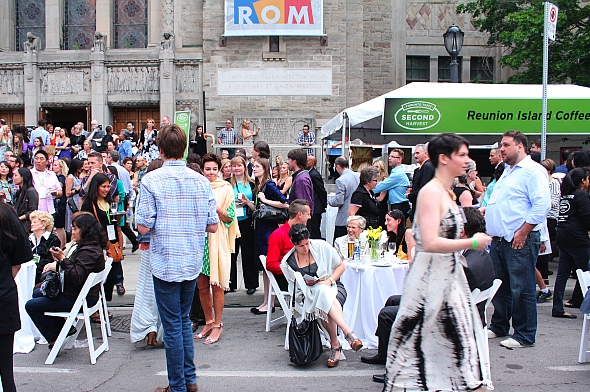