Toronto gets in on the barrel-aged cocktail trend

Barrel-aged cocktails are experiencing a groundswell in Toronto bars, but for the moment, there's still a degree of secrecy. Your favorite bartender might be hiding a barrel behind the bar, covertly taking sips of its contents and gauging whether it's ready for public consumption. Acting as something of counterpoint to the reigning trends in mixology today, barrel-aged cocktails achieve a similar complexity with relatively little fuss. Cocktails are pre-made and then aged in barrels for a singular flavor that can't be easily replicated.

There's the up-front cost of the alcohol and the nail-biting of monitoring the drink as it ages, but when successful, barrel-aging mellows and mingles the flavors and imparts some of the wood's smokiness. A recipe from that drinkers' bible of yore, Jerry Thomas' Cocktail Guide, calls for bottled versions of cocktails, and Jeffrey Morgenthaler of Clyde Common in Oregon revived and transferred the tradition to barrels two years ago.

When I first started investigating the availability of barrel-aged cocktails at bars around Toronto, the question I was most often met with was "What?" followed immediately by a stuttering, "Can you be more specific?" It's not yet a full-fledged movement (at least in this city), but there's a low buzz building around this new trend, with young and old alike requesting it at bars. Because barrels don't respond well to fruit juices or acids, it forces bartenders to move away from the crutch of sweet nothings, and up their game when layering alcohol.

But there's a payoff: following the initial thumb-twirling while the cocktail ages, the finished product actually provides busy bartenders a pour-and-serve solution to Toronto's growing demand for complex cocktails. All that's needed to complete a richly textured drink is some ice and a touch of garnish. 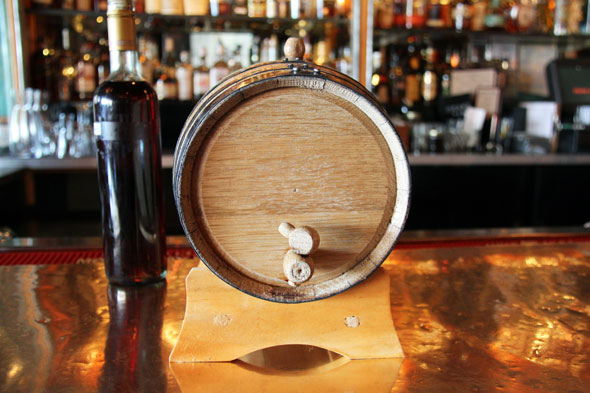 At Bestellen, they're already known for their barrel-aged negroni ($14), a traditional mix of gin, sweet vermouth and Campari — "they make friends in there," I'm told by bar manager G.P. A white Manhattan is in the oak cask right now, and expected to peak within the next month or two — they barrel-age their cocktails from three to six months for an ideal balance of woody flavors. G.P marks this as a growing trend, stressing that Toronto's grown past the G+T phase, and is now seeking subtler, more balanced flavours.

When I met with Robin Wynne of Fynn's Temple Bar, he said it all comes down to a science and in order to finesse the process, "you need to do your research." His first barrel-aged batch went in last year, and Wynne's cocktails are left in for a comparatively short run of 1-3 weeks — during which they undergo a daily side-by-side taste test with the original version of the cocktail — then bottled for a month or two, just enough for the flavors to mingle and the hard edges to fade.

Of Wynne's cocktails, I prefer the Rob Roy and the Peach Negroni: the former packs a hearty wallop of chest-warming caramel tones on the finish, while the latter adds a much-needed bit of sweetness to what is, to my taste buds, among the bitterest cocktails in the classics arsenal. He also barrel-ages a Nucky Thompson, an Irish twist on a Manhattan. Wynne tells me he's planning more barrel-aged classics and margaritas aged in a Tromba tequila barrel, as well as a Dark and Stormy with ginger liquors and lime bitters, with each costing you a risk-free $12. 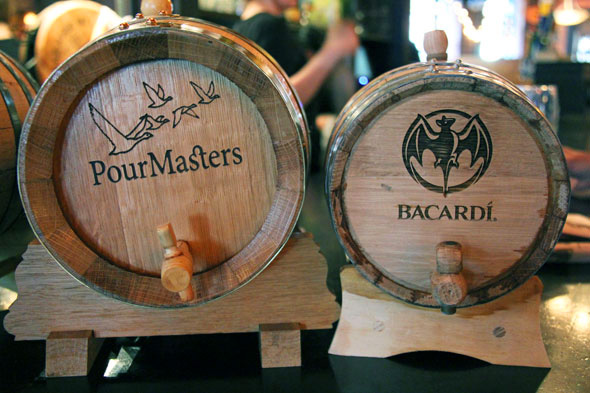 At The Drake Hotel's newly-launched dining-room cocktail bar, they currently serve three cocktails, each $14 for 3 oz. and aged for 4-6 weeks in American oak barrels: the Negroni, the Boulevardier, and my favourite of the bunch, the Hanky Panky — vermouth, gin, and the bitter finish of Fernet Branca. "The more people do it, the more interesting flavours you'll get, and they should differ from place to place," bartender Aaron Gaulke tells me. When asked what the response has been, he confirms that it's been positive, but "there was one person who said it wasn't the Negroni of his youth."

The Toronto Temperance Society also offers 3 oz. barrel-aged Manhattans ($18) and Old Fashioned's ($16) aged in Canadian oak. Cocktail Bar's oak-aged Manhattan comes with a wash of a concentrated, barrel-aged version of the cocktail, while Frankie Solarik of Barchef is rumored to be bottle-aging cocktails. Meanwhile, some bars are on the verge of this burgeoning trend, such as Toca, who are currently barrel-aging their own bitters, and are looking to up the ante to cocktails in the near future. Splendido is planning barrel-aging as their next project, with an Old Fashioned and Manhattan in the works for the fall.