Te Aro held its second annual Espresso Throwdown this past weekend, packing the cavernous main room of its Leslieville coffee house in aid of an appropriately coffee-themed charity. A tireless team of baristas volunteered their time to keep the crowd caffeinated with non-stop pulls of a selection of European-roasted beans, while Bellwoods brewery provided the (pale) ale and Fidel Gastro's set up their pop-up restaurant for the night.

Owners Andy and Jessie Wilkin decided to showcase beans from Europe, but with nothing from Italy, tasters might have found the shots being pulled at the bar to be outside the comfort zone of mass-market coffee here. As blended by roasters like Tim Wendelboe, Square Mile, St. Ali and Origin, the beans tended to be more lightly roasted, and the espresso was full of bright, acidic notes, with a long aftertaste. 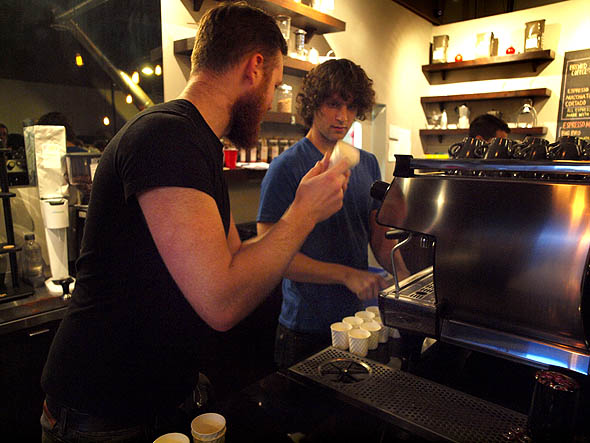 The baristas were working full out the whole time I was there, with no let-up as the crowd thickened halfway through the evening, and the Wilkins estimated that they might go through all of the thousand recycled paper espresso cups they'd ordered for the night.

The crowd was enthusiastic, with a visible contingent of local "coffee pros," some of whom took up position with notebooks and cameras; coffee culture in the city has certainly developed wildly in the last decade, and Te Aro and the Wilkins have done their part, evangelizing for small growers and out-of-the-ordinary flavours and processes at their locations at Leslieville and on Ossington. 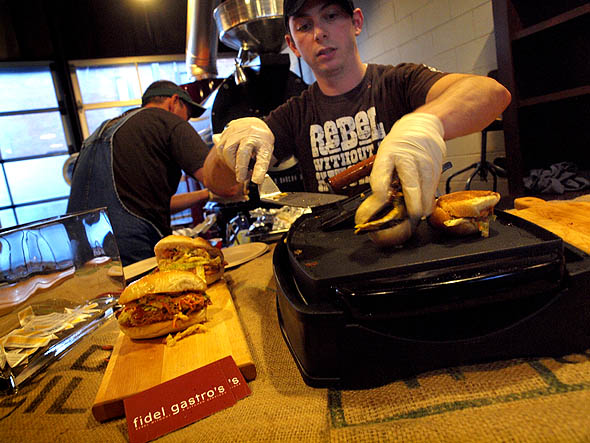 Fidel Gastro's has been written about here before, but this was my first experience with Matthew Basile's "extremo sandwiches," which he and a single helper produced tirelessly from their spot by Te Aro's roaster, loudly greeting regulars and bellowing "Ole" all the while. Basile says that everyone asks him when he'll be opening a storefront location, but he says that he wants to stick with the catering/pop-up business model for now, mentioning in passing the possibility of a food truck.

Basile concentrated on three or four basic sandwiches all evening - crowd pleasers like cheese steak and buns filled with braised meats mixed with bright toppings like his "slawlsa." The rich Sloppy Jose with its tender beans was delicious, but his pork belly sandwich, the product of a night's slow cooking, was actually sublime. 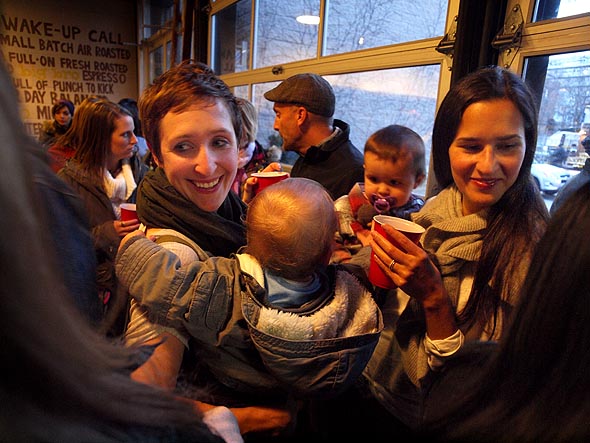 Andy Wilkin recalled that he encountered Coffee Kids, the charity set to benefit from the night, on his travels in Central America checking out small growers. Founded almost twenty-five years ago by an American coffee roaster, it works in coffee-producing communities to help build schools, sustain local food production and finance microcredit projects. It's a fine example of the kind of hands-on charity work that should thrive in the shadow of our burgeoning coffee culture, which can actually fill a coffee house with young singles and families on a Saturday night. 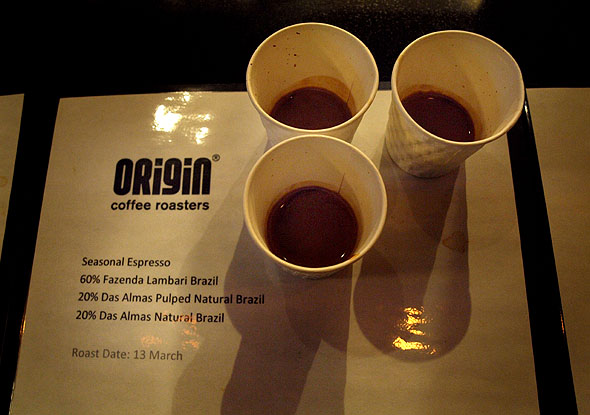