Usually, when I bring up the subject of local craft beers, it doesn't take long for someone to raise the point that these brews aren't typically of the variety one can consume in large quantities. With their hoppier flavour profile or their tendency towards the dark and rich, craft beers aren't often the first choice for people looking for a good, local session beer. Thankfully for those people, the guys at Hogtown Brewers agreed, and decided to do something about it.

Founded by six guys who play rugby together, Hogtown Brewers was born out of a desire to create a local beer that had a decent amount of flavour but wasn't so complex or heavy that you couldn't drink a half a dozen or so in an evening (see above re: six dudes, rugby).

The idea, according to Pete Shippen, one of the brewery's founders, was to develop a beer that was "just drinkable enough not to alienate." With the help of experienced brewmaster Jay Cooke, that seems to be precisely what they've done.

Hogtown is probably Toronto's only Kรถlsch-style beer, a lagered beer that is essentially Germany's answer to the British Pale Ale. It's a beer with a rich brewing tradition in Cologne, and the style choice is a reflection of brewmaster Cooke's training at brew schools in Germany. 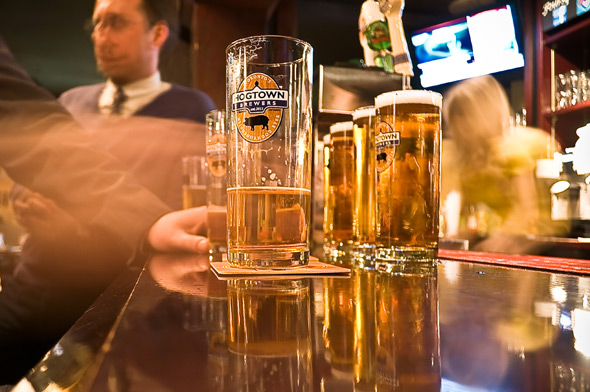 The beer is a pale straw color with a noticeable but not overbearing hops presence and a middle-of-the-road alcohol content of 5%. I can certainly confirm its easy drinkablilty, and if the throngs of after-work drinkers at the Duke of Devon, where the beer is currently being poured, are any indication, others agree.

Hogtown officially launched this past weekend, slightly ahead of schedule. The owners of the Duke of Devon told Shippen that they'd start pouring Hogtown on Wednesday, just as soon as the current supply of Alexander Keith's Red was expected to run dry. Anxious to get their beer out there, however, Shippen and the rest of the Hogtown Brewers enlisted some friends and saw to it that the bar's supply of Keith's Red ran out ahead of schedule and Hogtown has been tapped at the Duke since Friday.

There are plans to take Hogtown to other bars, but in the meantime Shippen and his partners are happy staying a little bit exclusive. "We've had a lot of interest," he notes, "but we want to be able to expand the right way." The plan seems to be a level-headed approach not to get too far ahead of themselves and to grow the business in a way that ensures they can still service whomever opts to pour their beer.

Shippen brings just some of what seems like considerable business-savvy to a group of brewers/rugby players that comprise a few financial industry types, as well as a current student and a gum salesman. For now, they seem content to take it one step at a time, but during a conversation that included reference to the Duke of Devon as a "focus group" and a chat about their contract brewing (at Cool Brewery) as a "less capital intensive" approach, it seemed clear that the guys from Hogtown Brewers have their sights set on eventual distributing to a wider market. Given the rate at which people seem to be downing pints of their tasty Kรถlsch-style beer, Toronto's beer drinkers will likely be ready for them when they do.