How to cook the rest of the animal

Jennifer McLagan is a woman with a lot of guts. In town supporting her latest work Odd Bits at the Cookbook Store at Yonge & Bloor on Tuesday night she stood behind several trays of it. Flanked by Kensington Market butcher extrordinaire Pete Sanagan, the affable Aussie ex-pat and local author known in food circles for her previous culinary works Fat and Bones took the audience through a fun, hour long tour of the fifth quarter in an attempt to demystify the often intimidating world of offal.

Inspired by how her mum used to prepare off-cuts (often in a barely palatable way) and tried to make the book accessible to the average home cook since offal and 'odd bits' in contrast to the growing connection viscera has with culinary bravado and food for the 'tat and piercing' crowd. 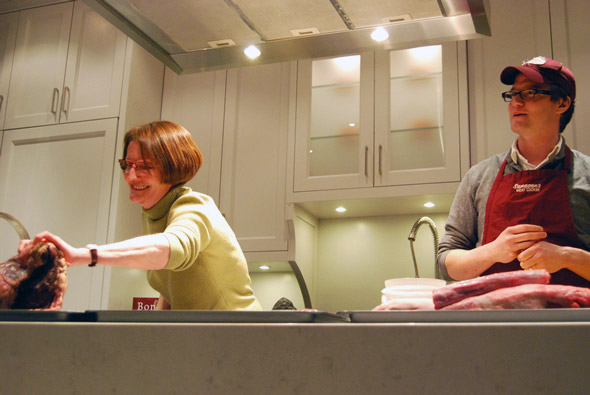 "Odd bits are old food" Ms. McLagan explained as Pete deftly trimmed and prepared an cow's heart for tartare (which, incidentally, is going to be the centerpiece of my Valentine's Day meal next year). "It's food that seems to have lost some appeal in the post-war era as a result of industrial farming and lower prices for 'prime cuts'" she continued "The fact is, anyone can cook a steak but it takes real skill to coax flavour out of an off cut." 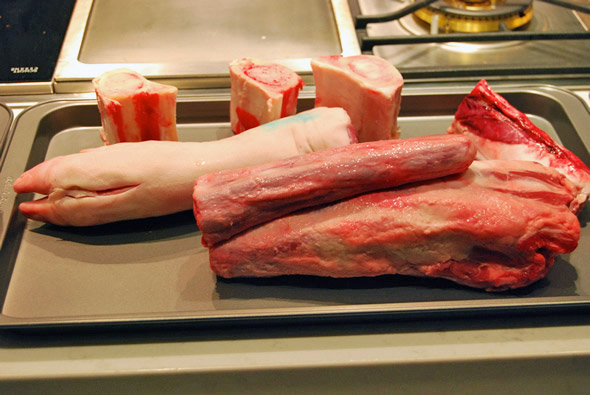 It definitely takes a bit of skill to prepare offal. Most of it needs to be poached ahead of any preparation in a dish and in the case of a pigs ear a little hygiene is in order as well as McLagan delightedly informed the crowd that pigs have earwax too. That, and the best way to remove any bristle missed by the butcher is with a disposable razor. It wasn't all livers, kidneys, tripe and testicles, though. Equal billing was given to beef cheeks, which are fantastic braised and pig trotters which can add a wonderful depth of flavour to a broth.

Acknowledging the locavore movement, McLagan admitted that in the case of off cuts, Quebec supplies a superior product since there's a higher demand for it in that province, something she hoped her appearance would go some way to remedying since the only way to ensure local product is by increasing local demand.

She also stressed the need to buy organic when at all possible and develop a relationship with a knowledgeable butcher like Pete who could ensure the best quality product. Despite the visceral nature of the evening and the meat-centric themes of what, tongue-in-cheek, Jennifer describes as her 'carnivorous trilogy' she confessed that she's not as much of a meat eater as her books would lead you to believe. "I had pumpkin risotto for dinner last night". 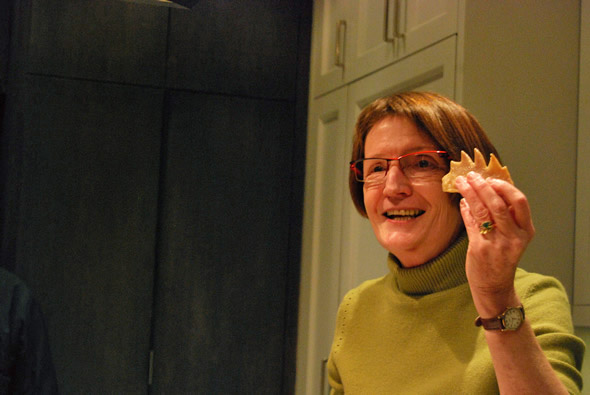 As the evening drew to a close and the final questions and Jennifer took the time to answer some final questions, Pete started packing the remnants of the evening's demo which, he informed the audience, were destined for the pots at Parts & Labour where Pete and Jennifer were dining that evening. "I find you're always ensured a good meal when you bribe the chef with free stuff" Pete noted with tongue firmly planted in cheek.