Zane Caplansky has big aspirations for his food trucks. Yes, that's plural. While only one of these blue beasts has hit the road to date, Toronto's smoked meat king wants to take them national and launch food trucks in cities across Canada. That's a lot of $6 smoked meat on rye. 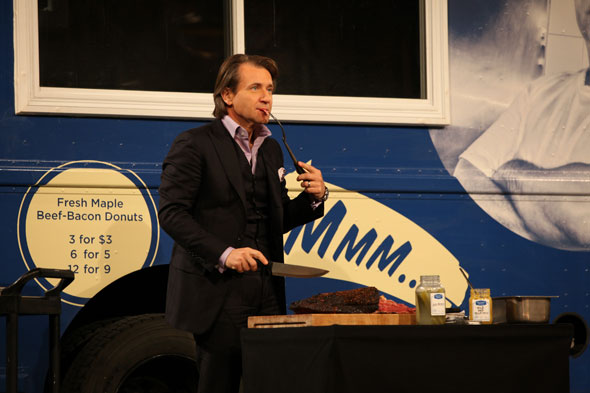 Whether this plan comes to fruition will in large part be revealed tonight on the CBC's Dragon's Den. In a segment taped earlier this year (but to be shown for the first time at 8pm tonight), Caplansky introduces his food truck concept to Kevin O'Leary, Robert Herjavec and the other three Dragons. He's mum on how it turned out. But for those who want the proverbial best seats in the house for the pitch tonight, Caplansky's is hosting a screening party at their College St. restaurant. No word yet if he'll be serving free pickles.

UPDATE: All five dragons declined to invest with Caplansky. He was asking for an investment of $350,000 for 15% of the business. Surprisingly, the main issue (aside from valuation) was that the Dragons just weren't on board with the food truck trend and felt that franchising the physical restaurant was the better growth option.