Queen Street Market to be reborn as healthy food hub

Queen West is getting a new food court â one that specializes in healthy fare. As first reported in the Grid, the site of this new venture is actually quite old. The former Queen Street Market, a mostly vacant take-out hub across from the MuchMusic building that dates back to 1912, will receive an identity makeover with an eye toward populating the space with new vendors.

The new food emporium, as its owners refer to it, will be called the Grove and feature rules regarding the type of food served under its roof. Vendors will have to adhere to a policy that forbids the use of "artificial flavours, colouring and hormones." Current tenants that wish to stay will also be subject to the new rules. 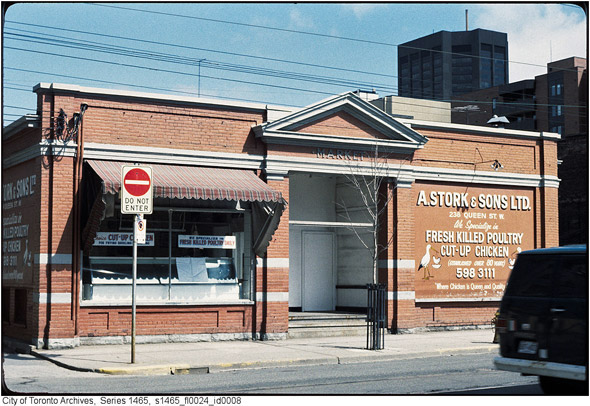 There are also long term plans in place to run a farmer's market behind the building and to allow vendors to sell unprepared food in addition to take-out meals. These two features would bring the Grove closer what was originally intended for the building when the City of Toronto solicited proposals for how to revitalize the old market space after long-time occupant Stork Chicken vacated the building in the late 1980s. The idea back then was to create something similar to the St. Lawrence Market.

Needless to say, that never happened (which eventually precipitated a dispute between the City and the former owner). And while the latest iteration of what was once known as the St. Patrick Market appears to be more foodcourt than market, at least the concept sounds like a promising plan to inject some life into what has become a pretty tired space.

Lead photo by Uncle Lynx in the blogTO Flickr pool. Second photo from the Toronto Archives