Food and film combine at the Epicure's Review

Want a recipe for a fun night out? Take two cups of a movie and combine with one cup of pot-luck. Add two tablespoons of nostalgia, and mix well. Sprinkle generously with community camaraderie and voila! The Epicure's Revue is served.

Held at the Revue Cinema on Roncesvalles, this event series started in 2010 and is similar to the NYC and Chicago Food and Film Festivals in that it marries a different cuisine with a film every month. Hosted by Chef Joshna Maharaj, this Wednesday had movie-goers visiting Italy to see the (very apropos) movie Mid-August Lunch and sampling Italian inspired wares from seven local restaurants. 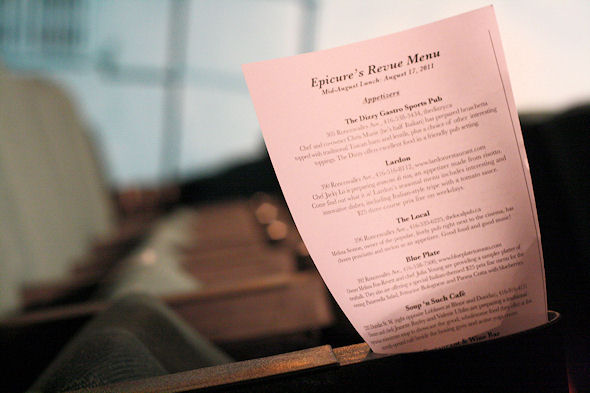 The turn out was good. The line-up to get in stretched all the way down the sidewalk (Yes, sidewalk! They have them now! Construction is finished!) to Howard Park Ave, and folks were handed a menu at the door after buying their ticket ($10 for members and $12 for non-members). Organizers may have underestimated how many people would be in attendance as food samples ran short fairly early on. Despite this I didn't hear any grumblings of discontent (or stomachs for that matter) as it seemed the buffet down in front was an unexpected and pleasant surprise for many. 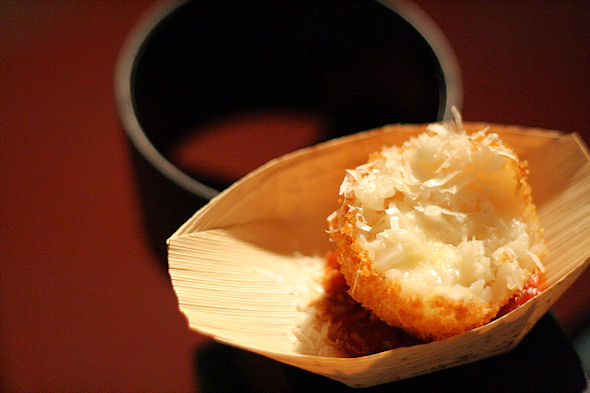 Although I wasn't lucky (or fast) enough to try one of everything, the edible highlights of the night for me were definitely the arancini di riso prepared by Chef Jacky Lo of Lardon, and the to-die-for chocolate gelato from Tim English at the Chocolateria.

I just love the Italian language.... arancini di riso. It sounds so much more poetic and appealing than "golden fried rice balls"... but that's exactly what it is. Semantics aside, those rice balls were absolutely delicious. Served on a dollop of tomato sauce, the arrancini was crispy on the outside (as most things fried) and filled with dense risotto. I could have eaten these all night in place of popcorn. 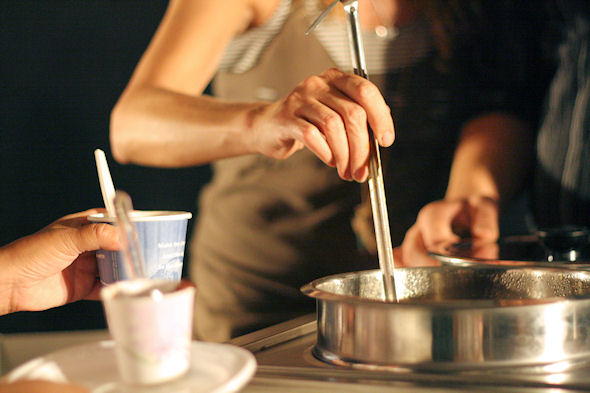 Then there was the gelato. This was no ordinary chocolate ice cream. Velvety smooth and rich in cocoa, it had me plotting against the makers of Dixie cups.

All that was missing was a glass of wine. After watching all of the gratuitous guzzling in the movie (I think there was a bottle or a glass in every scene...I sense the birth of a new drinking game...), I would bet some folk made their way in Pavlovian fashion to participators, Domani Restaurant or Fat Cat Wine Bar in search of a good bianco or rosso. 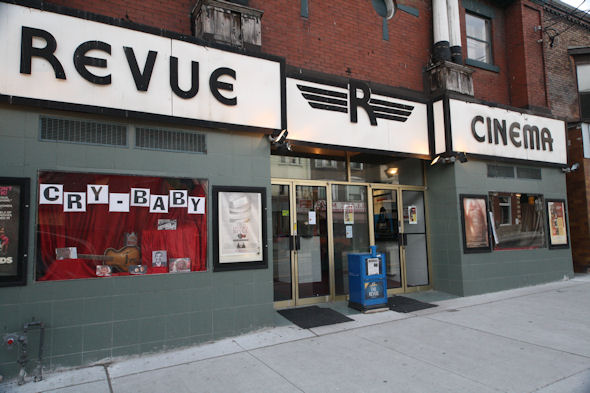 Next months Revue features the film Forks over Knives, a documentary about healthy eating. Participants will learn about meat and dairy-free diets while sampling vegan and vegetarian cuisine. And organizers have promised that food wells won't run dry next time!