For the second intallment of our preview of patio season in Toronto I stop by a favourite watering hole in Bloordale. While it may not be obvious that a patio can be found here, in the back lurks a little oasis. To be honest, the fenced in chunk of property behind Three Speed is more backyard than patio. The junky hodgepodge of second hand furniture is an accidental tribute to neglected homesteads everywhere. A comfortable, quiet oasis just beyond the madness of the downtown core.

The place is decorated with an effortless clutter that gives way to the area's centerpiece: a wood burning brick oven used to heat the patio as well as contribute the occasional culinary delight to the menu (I've spotted wood-fired lamb as a special).

Who goes there
This is an enlightened neighbourhood local. One that's good enough to extend that "neighbourhood" far beyond its traditional definition. Think U of T graduates who outgrew the College and Bathurst scene a few years ago, started to get their life together, but never stopped drinking; then sit them at a table beside the likes of Ron Sexsmith or Kevin Drew. 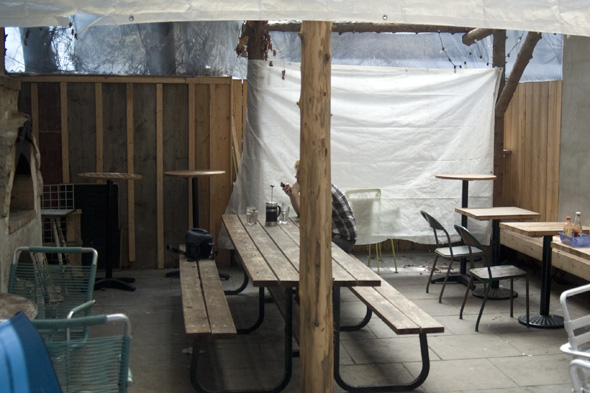 Grub and Libations
Three Speed has enough ambiance to survive as a watering hole alone. Most places like this manage to operate with the likes of a toaster oven and a hotplate but Three Speed's menu is good -- and I mean really good. For starters, stop by for weekend brunch and get a bodum of coffee along with some truly spectacular eggs benny: perfectly poached eggs perched atop thin cut peameal and dense Portuguese bread, smothered in thick, house made hollandaise. Or visit in the evening for a pint of Beau's Lugtread and oh, I don't know, maybe one of the best burgers in the city?

Odds of Scoring (a seat)
Three Speed has the enviable position of being one of the only patios in a pretty substantial radius. Add to that, a totally homey, comfortable vibe and you'll find that this place fills up virtually every night of the week. The trick is to come early. The bar opens at 5pm and anytime before 8pm is generally safe to snag a spot. But beware -- this will only become more difficult as the season matures. 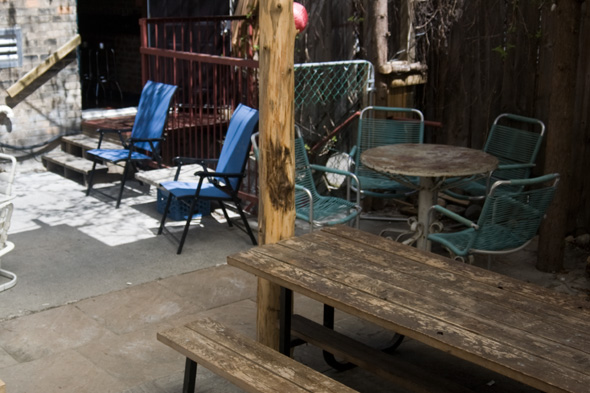 A view to a ...
Nobody sits outback for the view -- unless it's stylish, attractive people you're looking to lay your lecherous eyes on. In fact, quite the opposite. The back patio keeps the world out, kind of a rag tag retreat where it's easy to let the evening slip into night and before you know it it's last call and you just know you're going to be late for work in the morning...but order one more round anyway.

SPF recommended
This isn't really the place for any serious suntanning. The patio is south facing but is partially covered. That means that while it isn't safe from a little cool weather, it'll keep patrons for the most part. 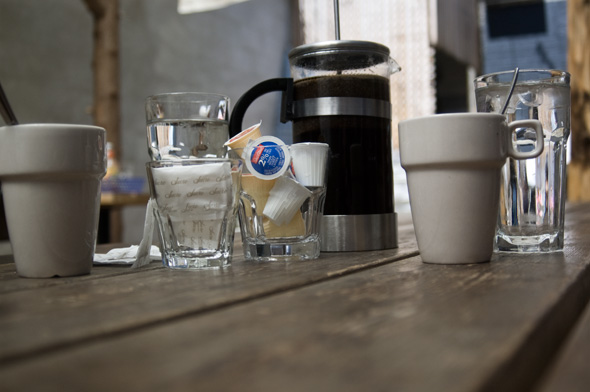 Overall Impressions
A Sunday brunch outdoors at Three Speed is definitely one of Bloordale's best kept secrets. Unfortunately for those of us who have had the privilege of enjoying its relative anonymity, the secret is out and every week seems to draw more and more people. It makes sense though -- the quiet laid back atmosphere is the perfect compliment to a bodum full of coffee and a late Sunday morning.