And we're back! After three days of near constant rain, the patio preview returns to shift focus from this gawd awful gloom back to better days when when warm nights seemed mere moments away and patio season felt — and I promise folks, it still is — imminent.

It's fitting though that during a brief break in the drizzle, I found a patio that is virtually rain proof. It belongs to the Caledonian, a little place at College and Ossington that bills itself as Toronto's only (true) Scottish pub. Now, I cannot confirm or deny this claim, and I'm happy to entertain cases to the contrary, but this is the first place in Toronto I've seen haggis, neeps and tatties ($15) on the menu as standard-issue. 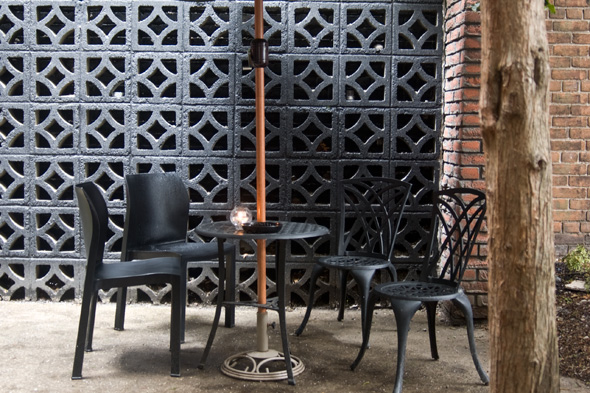 Who goes there?
Locals of course, but look for a few Scots in search of a little taste of home. On Sunday evenings they have a Ceili (kay-lee), which is a social gathering where people play Scottish folk music together and get very drunk (probably).

Grub and Libations
If Haggis isn't your thing, try their Scotch Egg ($8) - a sausage wrapped hard boiled egg that is then breaded, flash fried and baked. Why do all that stuff to a boiled egg? Who knows, but to be honest, it's really quite good.

Honestly though, try the Haggis. It gets a bad rap in popular culture for being traditionally cooked in a sheep's stomach, but it's really not as offensive as it sounds. It's actually something somewhere in between a large sausage and a meat loaf and is the perfect pairing to one of the Caledonian's fine Scotch whisky.

The Caledonian carries a selection of close to 60 Scotches representing each of the major regions of the country and really doesn't charge all that much for them. A dram will generally cost between $8-$10 with the Macallan 18 topping out at $27 on the high end. 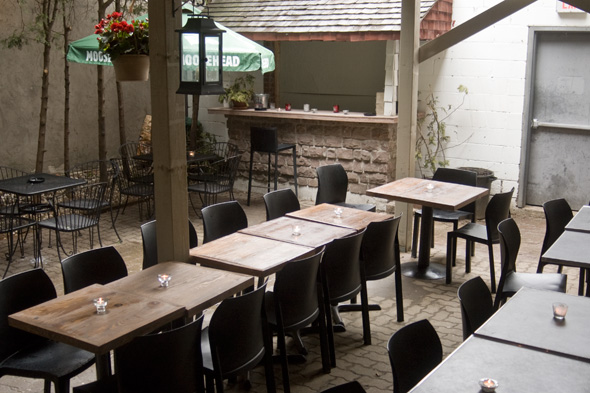 Odds of scoring (a seat)
It tends to get busy out back, but there is plenty of room, and the general consensus is usually "the more the merrier." I counted roughly 45 seats during my visit, but I'm told they had as many as 60 people back there on Sunday — in the rain, and I believe it. There's a real casual vibe back here that could keep drawing people long after the seats are gone and capacity has been reached.

A view to a ...
Don't count on a whole lot of city life floating by on account of this being a backyard. What it does have going for it though is its relative obscurity, its separation from the bar and the neighbourhood and the city. It's a secret Scottish garden for all, if that doesn't sound too over-the-top.

SPF Recommended
With a canopy of trees, a large awning and several patio umbrellas, pale, pink Scottish skin is relatively safe back here. That doesn't, of course, mean that you shouldn't be packing a little just in case, but like any great oasis, this one comes equipped with plenty of shade as well as a little sun if you need it.

Overall Impressions
This is one of the few patios in the city that I'd feel comfortable calling all weather. It's not heated, but the large awning means that even in the heaviest storms you're going to stay dry. In fact, I think a pint of Deuchars IPA, a pretty lady and a violent thunder storm (n the distance) would make for a remarkable evening. 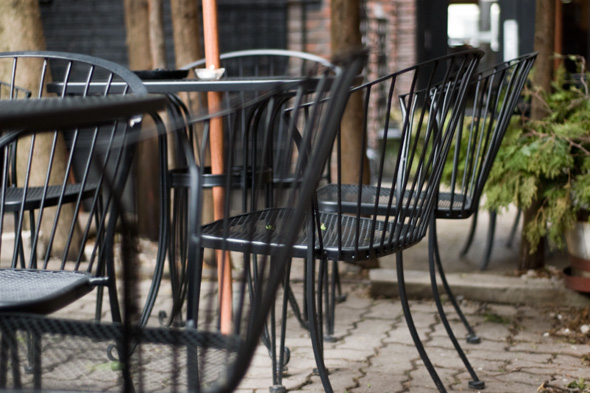