Toronto's newest patio (opened yesterday) sits on a narrow stretch of Astroturf between two buildings smack in the middle of Cabbagetown. The offshoot of what is probably also Cabbagetown's newest Irish Pub, it's just wide enough to fit two picnic tables length wise with an aisle in the middle, long enough to cram about 36 people, and lively enough to keep the glassing clinking SlÃ¡inte late into the evening.

Stout Irish Pub opened its doors to the public back in January, taking over the building previously occupied by the Brass Taps, and since then has been slowly building its base of regulars. It's a homey kind of place with a familiar vibe, but this is no cookie-cutter franchise. Stout has the warmth and welcome of a family-owned local — the roots might not have sunk it yet, but they've certainly been planted.

The patio has a suburban cottage type feel to it with faux grass (let it slide folks, real grass would be impossible to take care of and probably dead in a week) and picnic tables. But is it worth a visit? Lets see...

Who goes there?
Is there a "pub crowd" or a "pub type"? If there is they go here, to this pub. What I mean is, this is not a nightclub crowd, or a lounge crowd, or a bar crowd — it's a pub crowd. A campfire sing along, bar band belting out "Me and Bobby McGee" kind of crowd. It's familiar and homey, a place you'll feel like you've been to before, in good way. 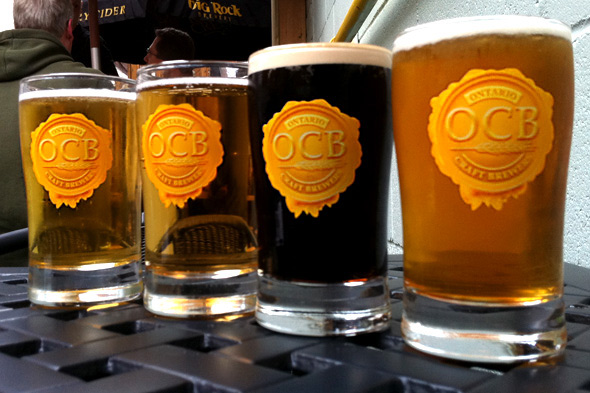 Grub and Libations
Stout counts 20 beers on tap, almost all of them of the Ontario craft variety as well as another 30 in bottles. Pints run between $6 -$8, but the best option in my books is the taster tray that allows you four 5oz choices for $7.50 (5oz x 4 = 20oz = same as a pint!) — a virtual craft brewery-crawl from the relative safety of a picnic table in Cabbagetown.

Odds of scoring (a seat)
It's hard to say, the place is only 24 hours old at this point. But if I'm going to assume a small level of expertise on the subject (why not?), I'd say the difficulty level would be "moderate." There isnt' a whole lot of seating out there, but at the same time it's also not a prominently featured part of the place. Oh, and non-smokers might want to steer clear, with the close quarters, it tends to linger a little bit. 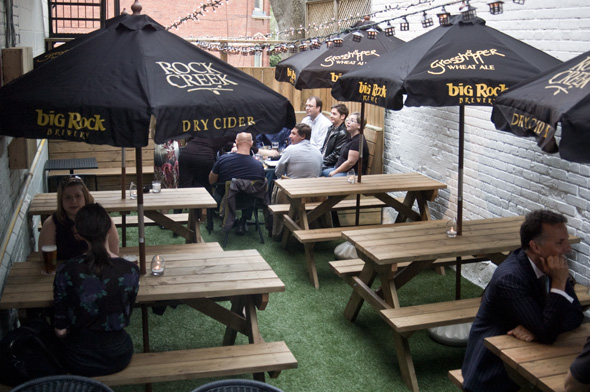 A view to a ...
The Stout patio is located in the laneway on the west side of the building. They've done a great job making it not feel like you're eating in the alley, but you're still surrounded by fences and walls which means the view is minimal. And it definitely qualifies for the backyard oasis category. Even though it's not really in the backyard.

SPF Recommended
In proper backyard patio fashion, each of the picnic tables has an umbrella to protect patrons from harmful UV rays, not that it's all that much of an issue. Again, because the place is surrounded by walls, you'll be bathed in shade.

Overall impressions
The fake grass jumps out at first — I don't know if it's because it's not real or if it's just because there is actually grass back there (are there any grassy patios in this city?), but regardless, it's kind of nice, and the staff is very friendly and accommodating.

Because the space is so new, it also kind of feels like a show room right now, the kind you might find at a trade show selling barbecues or motor boats. It just needs a little working in though, and with (fingers crossed) summer on the way, that shouldn't take long at all.