With the addition of the Bell Lightbox to the foot of John Street, the Toronto International Film Festival has finally found a permanent home â one that shifts the focus of the festival from its historic home base in Yorkville to the Entertainment district. It's also arguably made life even more difficult for the art house cinema's in this city, essentially doing what they do, only on a waaaay bigger scale.

But the Lightbox is about more than just movies, as I touched on yesterday, it's an anchor in the ever evolving cultural corridor that John Street is becoming. Sure film is the centerpiece, but it's accented by exhibitions, workshops and, of course, food.

Oliver & Bonacini have two restaurants in the building, their fine dining offering, Luma, and the main level O&B Canteen, a casual grab and go type place with a patio that outlines the street level of the building.

Who goes there?
Film buffs, lunching ladies and lots of suits. This is Oliver & Bonacini, the same team responsible for some of this city's most luxe dining (Canoe, Jump, et al). As such, despite Canteen being much more accessible than say, Canoe, you'll still find a few of those self-important diners milling about.

Luckily the staff appear to be quite experienced and patient, their friendless unscripted.

Unfortunately, during my visit a gaggle of cackling harpies tested just how patient the staff can be, dragging a server around while they indecisively chose where they would sit. He was really going above and beyond, rearranging tables and propane patio heaters, tearing down and resetting cutlery arrangements... all while these women stood in the way and barked orders. I felt for the guy. 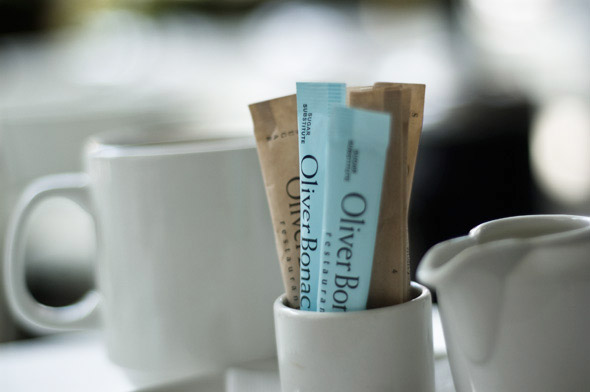 Grub and Libations
Up until just a few days ago, the O&B Canteen didn't do patio service at all, it was just open for their grab and go counter. So I was pleasantly surprised to see they had finally extended their entire menu to service the outdoors. It's an eclectic menu with an excellent selection of salads, sandwiches, pizza and mains. I chose a ham and cheese melt on a baguette with a side quinoa salad ($13.00) and a coffee ($2.50) and while I don't plan on dropping $20 on lunch regularly, it was absolutely delicious.

Their tap selection, however, leaves something to be desired with just two options: Mill St. Tankhouse ($7.50) and Stella Artois ($8.50). Wine might be a better choice (glasses priced $8-$12) or perhaps forgoing alcohol all together is the ticket. I dove into a rootbeer float ($7.00) instead, and didn't regret it.

Odds of scoring (a seat)
I have yet to see more than a handful of people out here. Now, part of that has to do with their lack of table service up until this point. Part of that probably can be attributed to cooler weather and part of that might be because it doesn't get that much sun. But I'm going to go out on a limb here and wager that come July these seats will be at a premium.

A view to a...
With a green hedge along the perimeter and a roof overhead, the patio at the O&B Canteen kind of walks the wire between backyard oasis and bustling streetside meeting place. Diners can enjoy the rush of King Street, or tune it out and focus on their companion. There's an implication of privacy, while being situated in the density of downtown. And if watching the street isn't your thing, the full length windows looking into the restaurant can be just as entertaining. 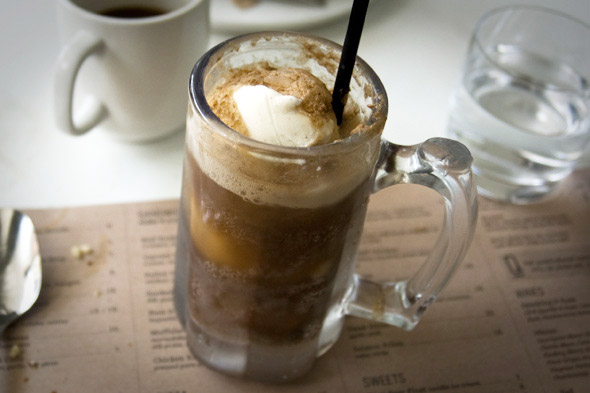 SPF Recommended
Even the fairest of the fair will be safe here. This south facing, canopied stretch isn't for those looking to roast, and during the first few weeks of patio season, that keeps it pretty empty. But when the air heats up, and humidity takes hold, a little shelter from the sun will be just the thing.

Overall Impressions
Since giving up my medical license (never had one), Oliver & Bonacini establishments are more often than not laughably out of my price range, but Canteen serves up solid, comfortable food that's not dramatically overpriced â and enjoying it in fresh air outside the Lightbox sounds exactly like a civilized way to spend a summer afternoon, and the perfect accompaniment to a night at the movies.