The strip of Wellington just west of Spadina is an enclave of production companies and media firms, an easy to miss line of former warehouses reminiscent of a bygone era, now re-purposed for a modern city. But along the tree-lined boulevard, in between the offices, there's also been a rise in restaurants and nightspots over the years, which has made the street a destination for some fine dining and entertainment.

And the newly renovated street-side patio at Marben makes the prospect of visiting the neighbourhood even sweeter. Maybe it's the vertical herb garden that makes up the east wall or the generous amount of unfinished wood, but this little urban retreat gives the illusion of being much more isolated than it really is. 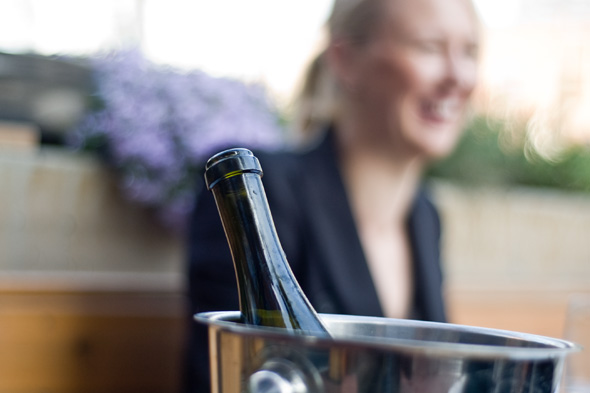 Who goes there?
Marben is close to a whole slew of condos, so expect the kind of upwardly mobile suits and skirts that spend their time in high rises. That is to say, Marben is a destination for the well dressed, trendy downtown crowd looking for a drink after work or maybe some high end comfort food with a significant other.

Grub and Libations
Ryan Donovan is Marben's very own butcher, so expect a menu that takes its meat very seriously. That said, it strikes a nice balance between creativity and accessibility. I'm talking beef cheek ravioli with baby spinach and beef bacon ($12), smoked Moscow sausage with house made saurkraut ($13) or, for the masochists out there, how about a mammoth 42oz dry aged Cote de Boeuf with red wine mushroom jus ($79).

On the taps you'll find the normal local craft brews available, but might I suggest a bottle of bubbly instead. Nothing suits sunshine and warm weather better than a patio and a bottle of Prosecco ($35). It's the kind of thing that can make any given afternoon feel like a small celebration. 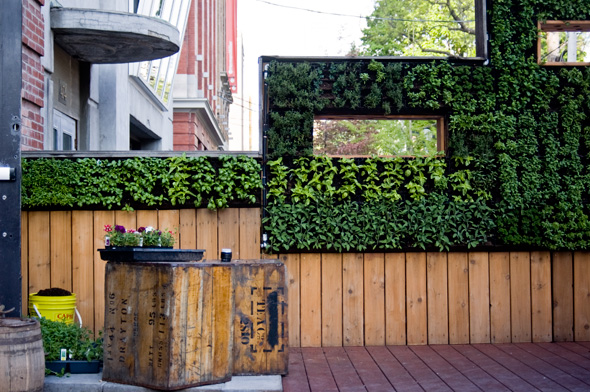 Odds of scoring (a seat)
Seating is definitely limited â this patio seats roughly 20 people so if it's a nice day expect it to fill up. It looks like there might be room to add a few more should the need arise, and the staff are incredibly helpful, but give yourself a buffer during peak hours if you insist on sitting outside.

A view to a ...
Wellington Street West has the kind of scruffy elegance perfect for a place like Marben. It's certainly not a place where you come for the view, but the street is lined with old garment factories converted into homes for various production companies and media firms. The boulevard is peppered with mid-sized maples that give just enough greenery to give your eyes something to look at.

SPF recommended
As a south-facing patio this one does pretty well sun-wise. It happens to be inside a little pocket without any giant buildings right nearby, so it gets a good amount of direct sun, and it's open every day at 11 a.m. (10 a.m. on weekends) giving that much more time to work on your summertime glow.

Overall impressions
There's nothing specific that makes Marben a patio worth visiting; it's a number of things combined that give the place nuance. The vertical herb garden, the age of the street, the excellent menu. Everything kind of works together. And they serve a pretty mean brunch. 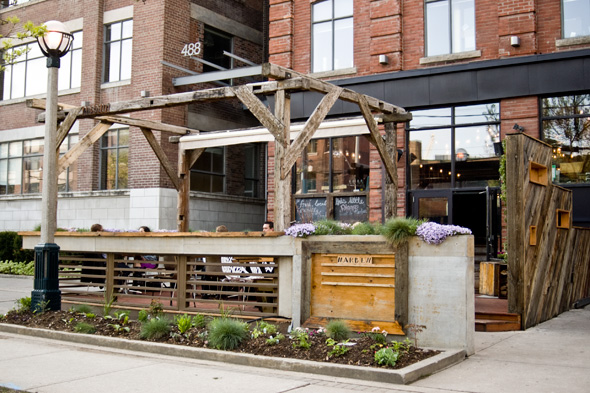