Who is June Harlowe?

The namesake behind June Harlowe Foods, a casual/comfy bistro in the Junction Triangle, isn't actually a person. Well, that's not fair. June Harlowe is actually two people: owner Sandy Dixon explains to me that June and Harlowe are the middle names of her two young daughters.

The corner lot at Dupont and Edwin plays home base for both the restaurant and Dixon's catering business. It's also the home base for many of the neighbourhood locals. It's an inviting little spot with a side patio that seats roughly 20 people. It might not look like much now, but she (and the community) have big plans for the space. Next week folks from the neighbourhood are coming by to help paint, after that a carpenter from nearby is going to oversee some light patio construction. Ultimately, Sandy wants the place to have a homey cottage feel, but even now it's a great place to soak in some sun and have a drink.

Who goes there?
I mention this only because it's not always the case, but--kids! The Junction Triangle is a neighbourhood full of young urban families who are enthusiastic about supporting local businesses, and as such, they've made June Harlowe Foods one of their own.

So expect lots of kids running around the patio during Sunday brunch. In fact, they're so common that Dixon is planning on installing a sandbox to give the kids something to do while the grownups sip on their Caesars. 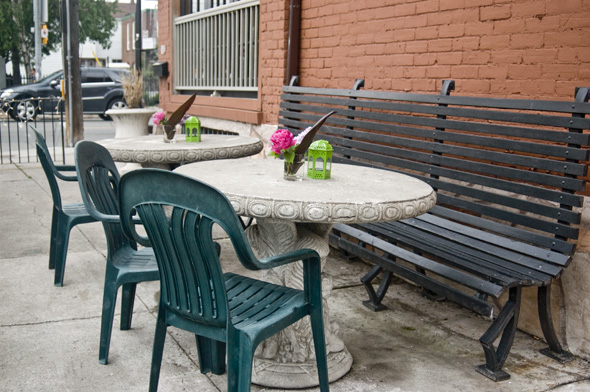 Grub and libations
Think rustic bistro cuisine, like maybe a warm, mushroom and spinach salad with shaved Parmigiano ($10) to start, followed by a thick, encrusted pork chop with mango and leek chutney ($18). Or if brunch is your thing, how about an order of crÃ¨me brulee French toast ($11) or an "Escondido" Chicken BLT with avocado and chipotle mayo ($12).

Oh, and on Wednesdays you can get a burger and a pint for $10. I'll say that one more time to make it clear: a pint of Creemore, and a thick juicy burger for ten dollars — there is no better deal in town.

Odds of scoring a seat
While the Junction Triangle is often talked about as an "emerging" neighbourhood, there's still not a lot going on this stretch of Dupont. That's good news though for those willing to venture a little out of the way for a cute atmosphere and genuine fine food. It sounds like brunch is when things get busy, but even so, finding a spot to settle in shouldn't be too much trouble.

A view to a...
Foot traffic here can hardly compare to the established people-watching neighbourhoods of downtown, but there are still people who float by. The difference here is that there's a good chance they might just slowdown and say hello when they do.

Dupont is also a pretty major artery in the city and as such, can get pretty clogged during rush hour. It's fun to watch that happen with a beer in your hand.

SPF recommended
Recommended indeed. This west facing patio gets plenty of sun and as of right now, there's no stopping it. What that means is, if you're playing hooky from work, you've got to come up with a really good excuse when you return to the office looking like you've just flown in from Barbados.

Overall impressions
The best and worst thing about June Harlowe Foods is it's location. If it were in a busier neighbourhood this place would be packed at all hours. But, it would be way less appealing if that were the case.

The Junction Triangle is the perfect environment for this beautiful little bistro. It's quiet, calm, friendly and has the real sense that there's something remarkable going on — June Harlowe mirrors that sense. Sandy Dixon's energy infects every aspect of the place, and luckily she's filled with good vibes. So whether you're just looking for a pint on a patio, or a new culinary experience, this is a place to see. 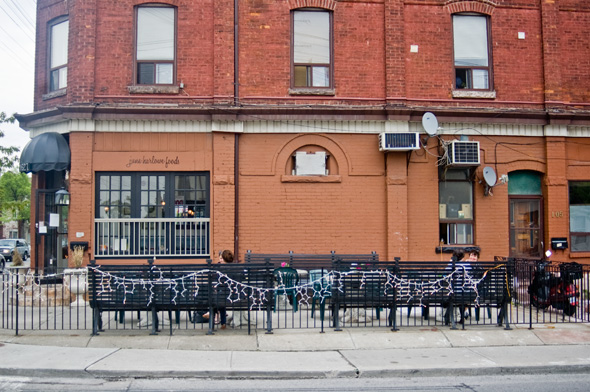