While the patio at the Jason George across from the St. Lawrence Market isn't new per se, it has been greatly expanded this year to practically double its capacity. That's a really good thing too — because when the sun starts beating down, this becomes prime Toronto real estate.

I always thought that Front Street, like Yonge, generally belonged to tourists and commuters. But after spending some quality time in this area, I've learned that not only was this assumption naive and untrue, it has prevented me from enjoying one of the truly great aspects of downtown life — downtown itself. Even after a decade of living in Toronto, it's still a marvel to soak in the height and density of the city. Outside of the core, Toronto is more of a collection of neighbourhoods but at the foot of Jarvis Toronto is definitely a city.

Who goes there?
The clientele at the Jason George are the people you see scurrying through the path toward Union Station at 5pm on weekdays, the packs of people wandering slowly up Yonge Street holding maps, staring up at the skyscrapers and those lounging in the sand at Sugar Beach. They're bike messengers, account executives, chefs, salesmen, nurses and nannies — they're everyone.

Grub and Libations
This is pub grub, mostly, but done right. No McCain superfries or frozen chicken fingers. Instead, think meaty fish and chips made with halibut and served on a bed of superb french fries. Or, for something lighter, the baked brie pairs well with a pint of pretty much anything. Just don't expect carefully curated collection of microbrews. This is a populist bar. Think Molson and Labatt's along with a slew of the standard imports. 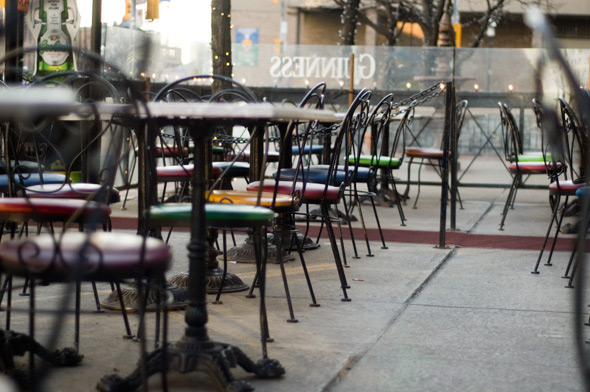 Odds of scoring (a seat)
There is no size of patio that could accommodate all the people pining for a seat on a hot sunny day. Jason George's street side patio is proof positive that if you build it, they will come. And as long as the sun is out and the temperature cooperates, on any given day of the week you'll find people planted in patio chairs. That you can count on.

A view to a ...
This is the place to take your relative from Saskatchewan to give him or her that downtown feel. The biggest boon to having a big patio right in the downtown core is the people watching and Jason George has got it covered. Weekends are even better with the Farmers markets and antique markets nearby as well, of course, as the St Lawrence Market.

SPF recommended
SPF is highly recommended. This is a patio for sun worshipers to the nth degree — a big bold southward facing patio on Front Street with nothing between you and the pure solar radiation. Even those in search of a little colour in their skin would be advised to lather on a little lotion before an afternoon here.

Overall Impressions
There are really two types of patios: the idyllic backyard or rooftop oasis, and the nitty gritty, street side, centre of the action patio. The Jason George is certainly the latter. It's an easy, comfortable place to hang out and soak in the neighbourhood with a staff who is more than happy to let you do it. It's the perfect excuse to be a tourist for the day and wander around the downtown core. 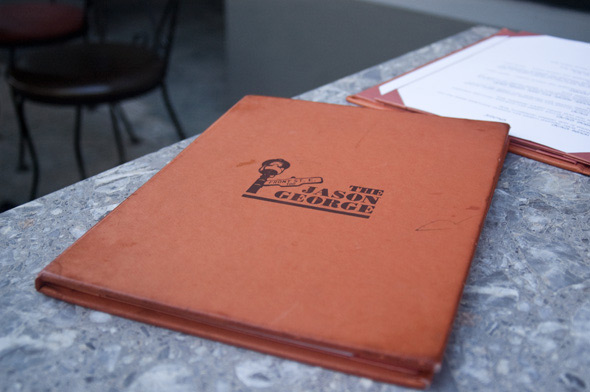