With the Ossington strip pretty much at its limit of bar space per square foot, the past year has seen a pretty substantial overflow onto Dundas, and the newest kid in the crowd is Churchill. It's a sleek, stylish spot with a modest menu, an impressive cocktail list and naturally, a patio.

The place has a sort of refined casualness to it; an elegance built on Lo-Fi design techniques and creative lighting like utility lamps hung with plumes of bright orange extension cord against exposed brick.

On the flip side, the covered side patio is modestly sized and seats around 25 people give or take. It's surrounded by a large garden and outlined with a few flower boxes that, admittedly, could use a little TLC.

Who goes there?
Stylish, young unprofessionals, of course. The downtown thirty-something set has claimed Dundas West as their own, and it seems no amount of bars is too many. But even with increasing competition, Churchill stands out as a truly inviting and warm place to have a drink.

Grub and Libations
The cocktail list here was designed by the Gladstone's Sandy De Almeida (who also tends the bar from time to time) which pretty much automatically makes it the neighbourhood's best cocktail bar. If you're lucky enough to stop by on an evening when Sandy is working, you might even get the opportunity to try something new that she's working on. On my visit she made me an as yet unnamed mixture of equal parts tequila, bourbon and chartreuse with some crushed black pepper, something I'll definitely be trying to replicate at home.

On the food front, think simple and unpretentious. The chickpea and jalapeno dip ($6) makes for a perfect bar snack if you're looking for something to nibble on. 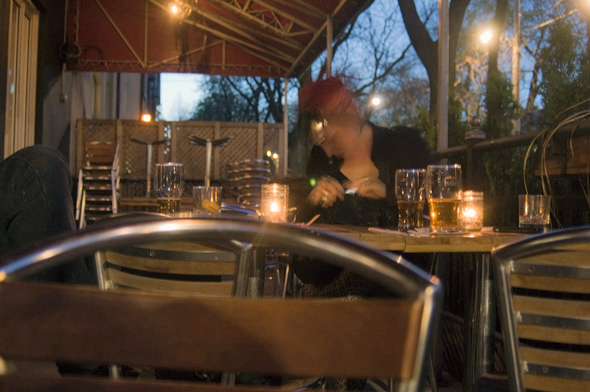 Odds of scoring (a seat)
As one of the hottest new bars in the Ossington overflow with a modestly sized patio, you can be sure Churchill fills up. But this crowd likes to mingle, so don't fret too much if there's not a seat open right off the bat; they free up pretty regularly. In the meantime, just hang out at the bar and get a first rate lesson in mixology (i.e. order a drink).

A view to a...
While an unobstructed view of the Beerstore and KFC isn't necessarily something you would generally look for in an afternoon patio hang, Churchill's corner spot does make for some decent people watching and once mother nature gets her act together with the warm weather, the neighbouring garden should start to bloom as well.

SPF recommended
Sun seekers should probably look elsewhere to get their vitamin D fix. Churchill's patio is 100 per cent covered, something that will probably become very appealing once we get into consistent 30 degree-plus weather and the air is thick with humidity.