I've seriously enjoyed the prevailing nose-to-tail wind that's lately swept Toronto's dining scene up like the Gale family farm in a Kansas twister, plopping eaters deep in a magical country surrounded by such terrible beauty and inhabited by a revolving menagerie of wondrous creatures that inevitably get popped, ground up, and stuffed in sausage casings then cold smoked.

That's why this year, as yuletide approached, finding myself in a particularly giving mood I decided to give myself a gift. But what gift to get the guy who's eaten everything? Why the gift of meat, natch!

Though post-meal and replete with meat I'd question the wisdom of having a tasting menu so close to Christmas, as it turned out The Beast Restaurant's "The Whole Beast" tasting menu was probably one of my culinary highlights of 2010. 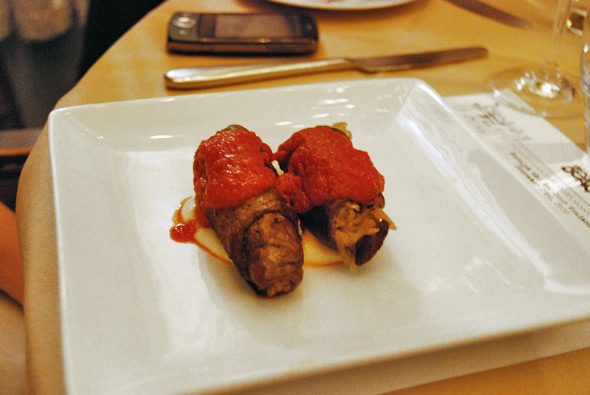 The concept is pretty straightforward. You pick your protein, give Scott and Rachelle Vivian and their gang a few days notice, and they put together a seven course menu using every bit of your desired critter (though despite what you've spied on Iron Chef, meat rarely makes a good desert -- but more on that later).

It being the holiday season and all, and because I thought it'd be hi-larious, I selected reindeer as my meat of choice. Alas, no dice, it was unavailable for *ahem* political reasons. Undaunted, I chose to put the faun back in fauna by deciding that venison (deer in the old currency) would be an acceptably cuddly alternative. Lucky for me, the chef had no qualms about playing Krampus, dispatching Bambi, and feeding her to the motley culinary crew assembled for the occasion. Sourcing the venison from Red Deer farms north of the city, he composed a menu that definitely played along with our merry prank. 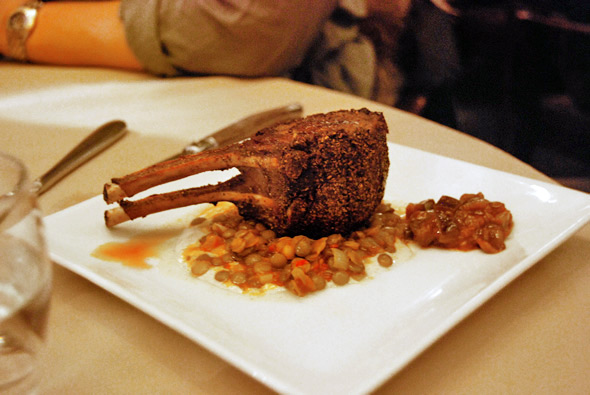 At a large, round table drenched in amber candle light near the window inside the cosy, former Lotus/Amuse Bouche space I was greeted with a complementary glass of sparkling wine and Scott himself amiably chatting with my dining companions for the evening: a bunch of food blog types including Trish Gill and Kit Boulter from the awesome, award nominatedEating Out: Toronto, Community Foodist's resident food sage Joel Solish and the lovely Krystina Roman fromRosewood Estates Winery. Though I'd never met any of these folks prior, it was like the best food-bloggy blind date you could ask for since we spent the following three hours eating, drinking, laughing and chattering on obsessively in a wonderfully candid way about food while bonding over a tasting menu entitled "Rudolph the Red Deer Venison:" a culinary trip around the world inspired by Santa's Christmas Eve pilgrimage.

Our host took the opportunity to apologize for the lack of "offal" on the evening's menu while we tucked into into some of Rachelle's warm, house made mini baguettes and buttery parker rolls served on a charming little cutting board etched with a bear paw. It seemed a certain restaurateur had pretty much cornered the market on local deer innards and there wasn't any left for our meal. After quickly scanning the menu we decided it was no biggie.

Yes, yes, wonderfully mood evoking stuff but how was the food?

The food was top shelf. You kinda expect that if you give the chef some advanced notice and let him choose what you're gonna eat -- you'll probably get his "A" game (hence why this is most definitely not a review) but Oh! Mah! Kase! did it ever exceed expectations! 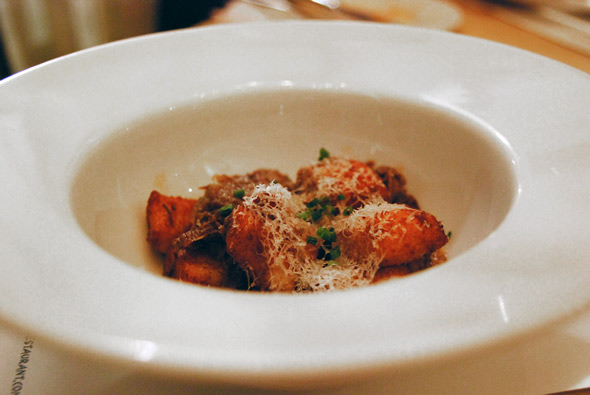 Dramatis Personae er, Menu -- in my case each course paired with a different wine 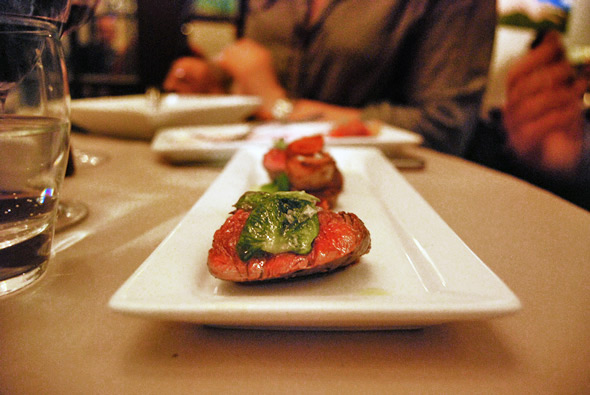 I could go into the minutiae of each dish but I'm assuming the vast majority of people hit their browser's back button ages ago. So for those of you intrepid foodies that remain, a brief summary. Highlights of the meal were the coriander dusted double chop, perfectly pink in the middle with the added benefit of a handle for when you decided the knife and fork slightly dainty and you'd rather just eat it like a caveman lollipop. The Charles Baker Reisling it came paired with electrified the smokiness of the curry, spices and sweet tang of the pickle, pushing all the flavours deep into Technicolor territory if y'know what I mean.

As an aside, there's something so wonderfully creepy about the paintings that adorn The Beast. Supine centaurs-and-fauns-in-reverse, your meals lorded over by a host of nameless backbencher Egyptian deities. But I digress. 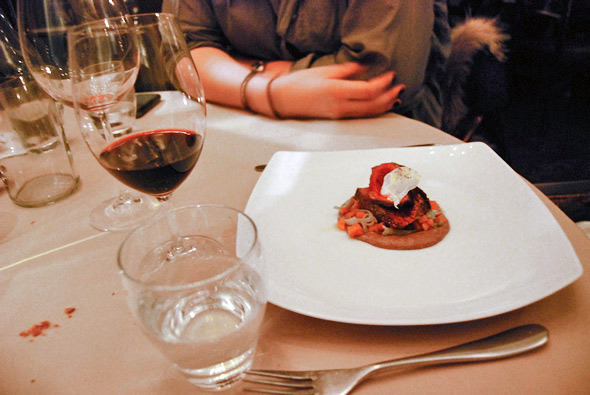 Nowhere on the menu was Scott's playful sense of humour more apparent than the Striploin in mole sauce. As the last "venison" course it was a cheeky take on breakfast coming as it did topped with a poached quail egg all resting on a bed of sweet potato hash. Like opening up the tabs of an advent calendar, the earthy complexity of the mole sauce made each bite a surprise and left us impatient for what the next bite would hold.

Deer being game meat and very lean by nature, it's something that begs to be served either as rare as possible or benefits from the long and low school of cooking. We ate examples from both styles every time the meat was the perfect doneness for what the dish required. It's a level of sensitivity you just assume from a trained chef and their kitchen brigade but it really comes into relief when you're eating several courses of the same meat. The other surprising aspect of the meal was the pronounced lack of gamey-ness to the meat. One of our party jokingly chuckled that the fear of predators in wild game is what gives them that gamey taste. Whatever the reason, Red Deer Farms raises some quality fauna definitely worth the bucks (and does). 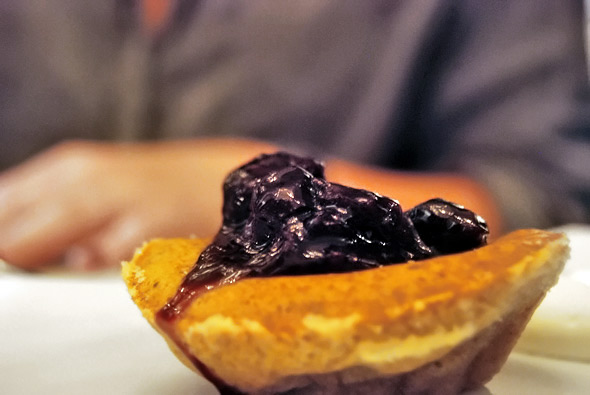 Rather than mucking about trying to find a way to make venison ice cream, Rachelle's philosophy for the desserts prepared for these tasting menus is to create confections based on what the animal would eat in its natural environment. She mentioned that at a previous tasting menu featuring rabbit, she'd made carrot cake for dessert and in our case apparently local deer eat a lot of black walnuts, bay leaves and cherries. Cool. I like all those things too. The bay leaf worked surprisingly well in this sweet, nutty context and really complimented the walnut and cherry flavours. The cake texture was dense and moist and sadly gone too quickly.

I'll freely admit that this kinda nosh ain't everyone's bag (though everyone at our table thoroughly enjoyed it), it's seriously, SERIOUSLY meaty and under normal circumstances it'd come with various "fifth quarter cuts" (unless otherwise specified) which may put some people off. But as far as tasting menus go, "The Whole Beast" is one of the best dining values in the city offering 7 thoughtful, entertaining, and ultimately tasty courses for the paltry sum of $80 (wine pairing is an extra $40 which is also a steal when you break it down by course) plus tax and tip. 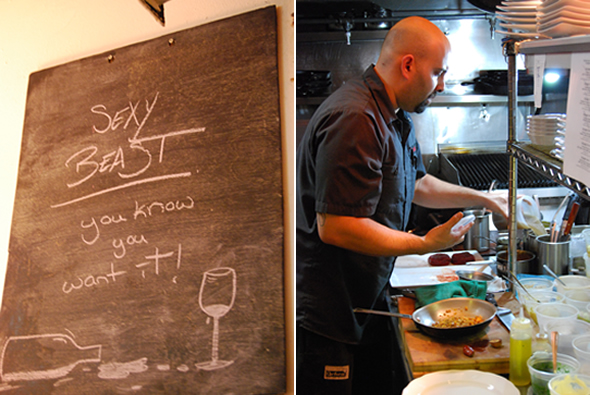 Scott's menu was exactly what we were hoping for: tasty and theatrical in equal measure. He often managed to subvert expectations as nowhere on the menu did we encounter the typical pairing of venison and fruit, and only 2 courses came with the expected pairing of red wine; another nice surprise. We all loved the personal attention from a chef who really seemed to enjoy the platform a tasting menu provides. The folks at The Beast have their shit seriously together and really appreciate adventurous eaters who are as passionate about food as they are.

Scott mentioned as we we're bracing ourselves for the roll home that he really wanted to cook an entire beast for a large party and, treated so well on our first visit, we may just have to indulge his request soon.