Salt Wine Bar has had its share of troubles since its owners signed the lease for the smallish space on Ossington in January of last year. That, many will recall, was just a few months prior to City council's passing of a one-year moratorium on new restaurants and bars on the strip south of Dundas West.

As bad as this timing was, however, there was some evidence to suggest that the moratorium would be lifted for smaller establishments in the fall of 2009. That never happened. A number of local businesses challenged the proposed changes to the ban with the Ontario Municipal Board (OMB), which put the restaurant back into licensing limbo until hearings are held in November.

That's where the story takes something of a turn. Salt decided to proceed in spite of its lack of a proper licence, and opened in early August serving both food and alcohol. A few weeks later, the Toronto Star ran an article that exposed this fact, which may have led to the latest development -- the temporary closure of the restaurant. I say "may" because I've yet to confirm the exact nature of the closure, and it may have just been a matter of time before Salt was forced to shut down. 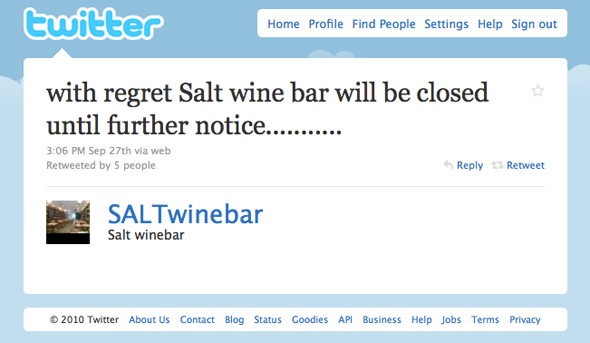 An employee I spoke to earlier today, replied to my inquiries by confirming the closure and telling me that they're trying to sort out "the situation." He also assured me that they do plan on re-opening, likely in around two months. That, un-coincidentally, would be in late November, the month in which the OMB hearing is set to take place.

The outcome of this hearing will, of course, be important for more than just Salt. The "bar-ban" on Ossington has always been too wide-ranging (many would be even less kind in their evaluation), and one can thus only hope that some reason will be restored in November. If this is the case, Salt just may get a fresh start.