The World Poutine Eating Championship - the first of its kind - went down yesterday at a rain soaked BMO Field. The marketing genius behind the event was Ryan Smolkin, owner of Smokes Poutinerie, who hopes to make the competition an annual one. Participants were corralled from an online contest as well as from regulars on the Major League Eating and The International Federation of Competitive Eating circuit.

I'm pretty sure Andy Warhol wasn't referring to professional eaters when he said that everybody in the world would be famous for 15 minutes. Nevertheless, if you've got a talent, I say go with it! If you're lucky and your talent happens to be putting back 13 lbs of poutine in 10 minutes then you deserve a cash prize, a massive "unique" looking trophy and heaps of adulation from a crowd who was genuinely enthusiastic and horrified at your victory. 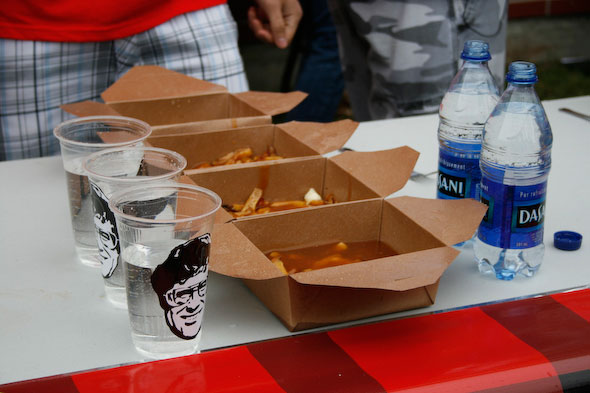 For some reason that's inexplicable to me, Poutine is a relative unknown quantity and often misunderstood outside of our national borders. You can find variants in the States but they inevitably mess it up with shredded cheese or subpar gravy. 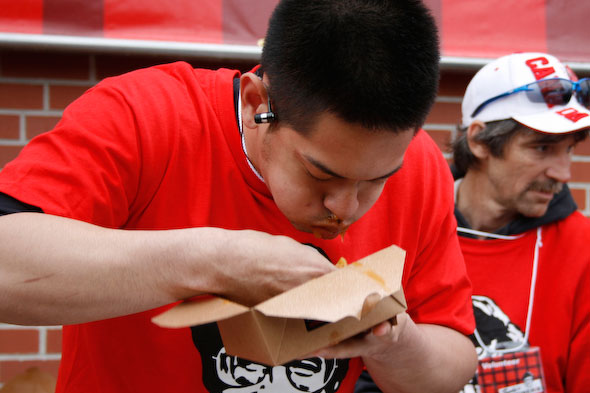 My initial impression after a quick browse of other MLE events (including 7-eleven Sport Slurping Time Trials) tells me that these so called "professionals" had no idea what they were in for and would be no match for our poutine loving gullets. 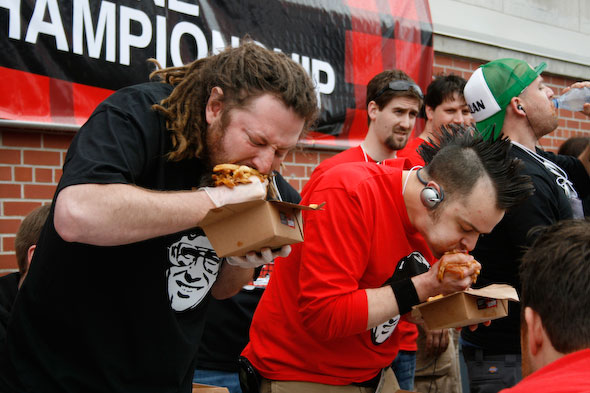 Crazy Legs Conti (pictured above left) was my pre-competition favourite. He's ranked #15 in the world by the International Federation of Competitive Eating. Legs has an impressive resume when it comes to heavy foods having once put back 5.5 lbs of buffet food in 12 minutes and 3.5 lbs of pancakes and bacon in 12 minutes. 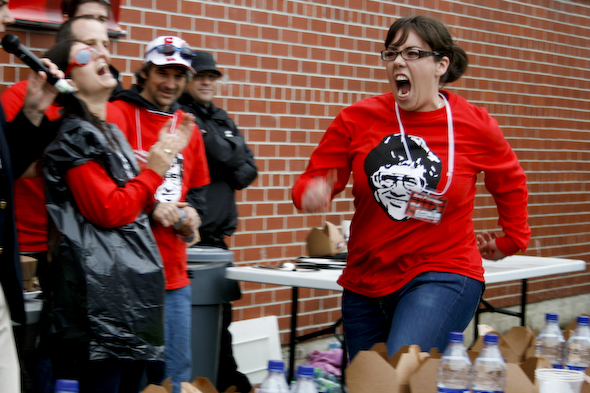 Not much was known about Deb Primo (above) but since she was a local contender I also gave her a good shot of winning. She's new to the scene, and this was her first event as a professional eater. There was a lot of pressure on her to come out the hometown hero. Would today be a case of beginner's luck? 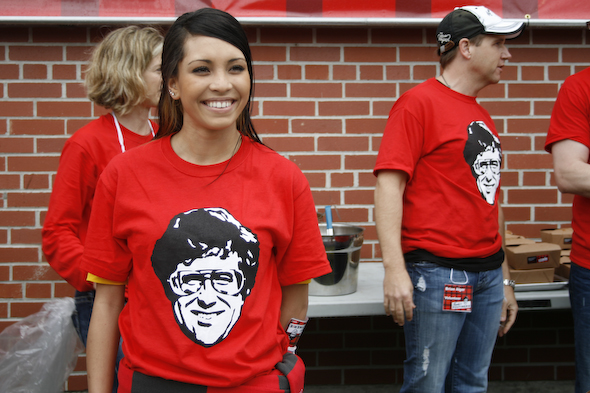 Mila Claire was selected by Smokes from one of the many who participated in the online contest. She's cute and tiny, loves poutine and apparently once ate 5lbs in one sitting. This was her first competition and to prepare she didn't eat for 24 hours before the event. She told me she was completely unphased at the prospect of going mouthful for mouthful against a bevy of international competitive eating luminaries. 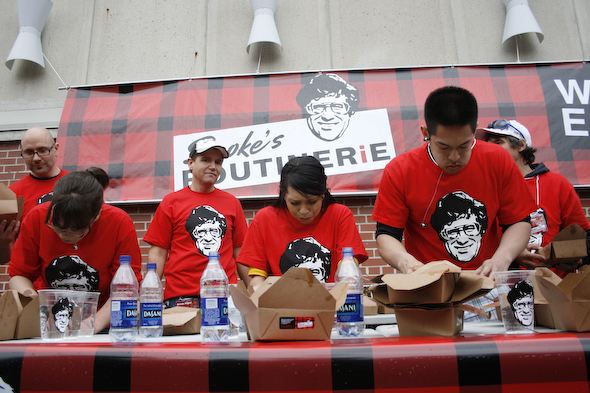 After a series of introductions that would make any WWE wrestler blush, the competition got underway. The competitors didn't bother with forks and opted to shovel fistfuls of hot, half melted poutine into their mouths at horrifying speeds. 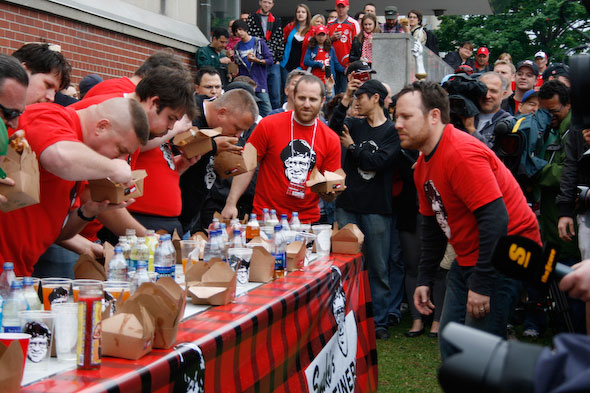 "Deep Dish" Bertoletti shot ahead with an early lead while Mila clearly struggled through her second box. Standing nearby as the smell of poutine wafted by I won't lie - I almost threw up. On a good day, I could maybe eat one of these boxes. I counted 4, 5, 6, 7 boxes emptied in front of me. 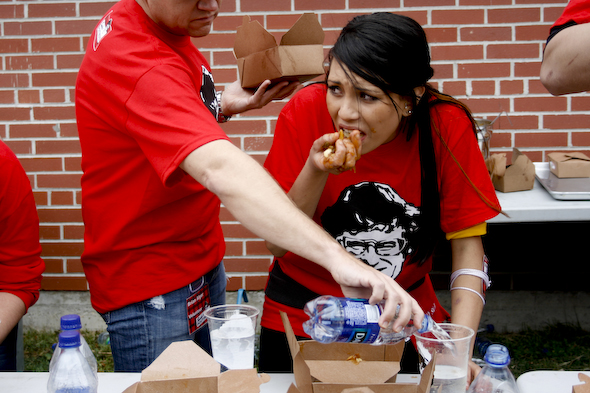 Competitors only had 10 minutes, and in the end our local eaters proved no match for the likes of the pros. But even Crazy Legs only finished 8 lbs, with the World Championship title going to Pat "Deep Dish" Bertoletti who ingested an astonishing 13 lbs. 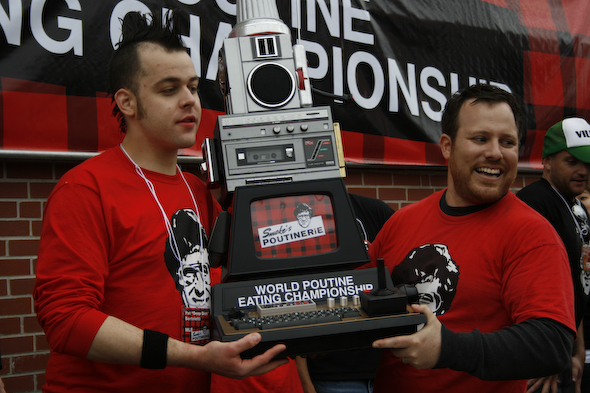 I spoke to Mila afterwards (2 lbs/10 minutes), who admitted she really wasn't very good at speed eating, and Crazy Legs just wasn't prepared for the size and quantity of cheese curds. Though he did say the gravy was absolutely delicious. When everything was said and done, it was hugely entertaining if not a little bit gross.

But as much as I loved it, I think I'm going to be off poutine for a little while. 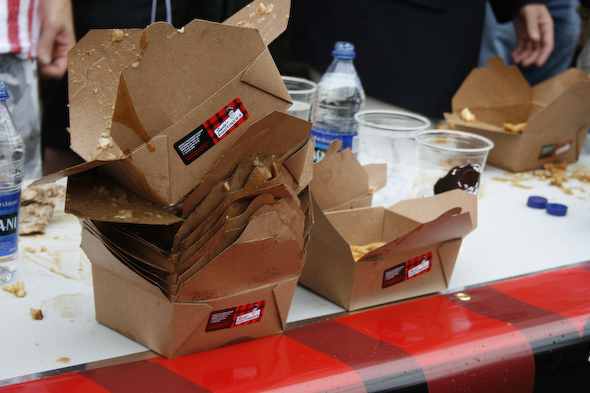