Is Enoteca Sociale the Next Pizzeria Libretto?

After 10 years and heaps of critical praise Silver Spoon will serve its last meal on January 22nd as chef-proprietor AND Pizzeria Libretto owner Rocco Agostino pursues yet another Italian adventure in the form of a wine bar set to open this spring.

It would be easy to point to the economy or the bothersome Roncesvalles construction (which "conveniently" landed a port-a-potty in front of the restaurant) on the closure, but the chef won't do that. Agostino instead cites his desire to follow his passion in another direction, and he's awfully content with what he accomplished during Silver Spoon's decade-long run.

And diners who already flock to Agostino's (and Max Rimaldi's) Ossington hotspot Pizzeria Libretto will, Agostino's betting, follow to the tentatively named Enoteca Sociale, conveniently located around the corner. 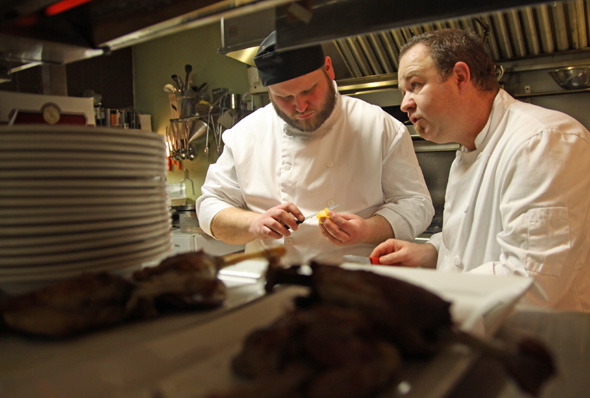 The Silver Spoon has been all about passion, and while the food being served still demonstrates this, spending even a few minutes talking food with Agostino makes it clear his current passion is directed toward his Italian heritage. Gone will be the pulled pork (so good I've heard it described as unfair to other people who think they're serving the dish) and the ultimate rack of lamb. At least the unbelievable duck confit lives on in pizza form at Libretto, even if it's not the focus of the plate.

And as much as I'm eagerly anticipating a promised cheese room and 80 wines under $80 (that's bottle pricing, not glass), the departure of Silver Spoon marks the end of a delicious era.